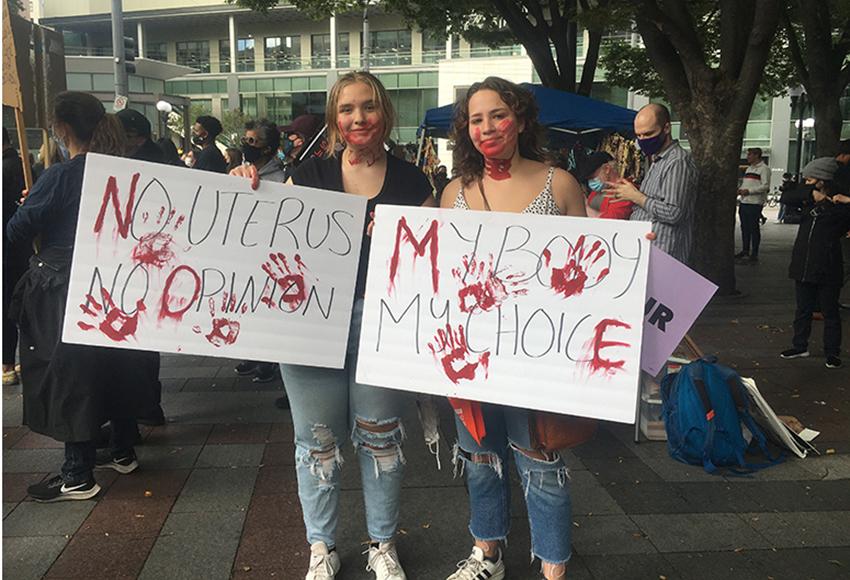 Seattle, WA – On Saturday, October 2, hundreds of people gathered in front of Seattle’s Westlake Center to protest recent attacks on women’s reproductive rights. Outrage sparked across the country after Texas passed the “heartbeat bill,” making it illegal for people in the state of Texas to receive an abortion after six weeks into their pregnancy. Although the law applies only to Texans, people across the country see it as an overt attack on women’s rights everywhere and fear it could lead to federal challenges against Roe v. Wade.

Before an audience in pink hats, the gathering in Downtown Seattle started with a performance by Filthy FemCorps, which bills itself as Seattle’s “all-women and Nonbinary brass band.” The event boasted a strong line-up of speakers, starting with Christine Reeves, former state representative and founder of the Political Equity Project. Reeves shared an emotional story with the crowd detailing the three times she had sought an abortion, reminding those in attendance that anyone from any walk of life could need an abortion. “Now I am a mom and a better mom because I was able to make that choice. What I choose to let grow inside my body is my choice,” Reeves said before giving a call to action to do away with crisis pregnancy clinics in Washington state.

Next, Alexis Turla, the chief of staff to City Council Member Tammy Morales, took to the stage. Turla told the audience about her family history and her origins in the South, and she shared an appreciation for the state of Washington “where Roe is on the books.” But she also warned that “the fight is not over. They hate you whether you want an abortion or are trying to have a family. The event continued as speakers called on voters to repeal the Hyde Amendment and Title 42, help create systems that help undocumented women have equal access to healthcare, and help fund Planned Parenthood. The rally concluded with a speech from Nikkita Oliver, candidate for City Council. The speakers left a thrill in the air, energizing the crowd and encouraging more folks to come forward and share stories of their own. The atmosphere was full of love, support, and determination, mirroring 600 other reproductive justice rallies happening across the country. (Seattle Gay News – Lindsey Anderson at https://www.sgn.org/story.php?ch=local&sc=&id=309539)