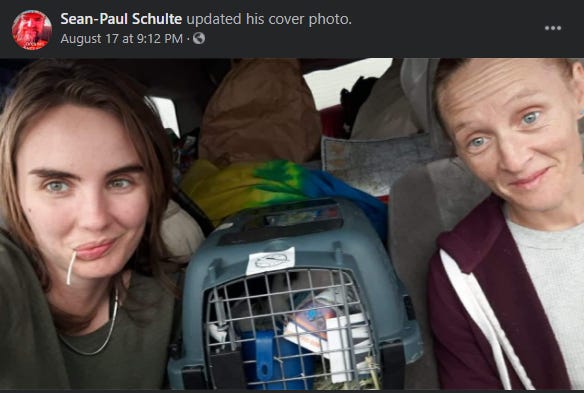 Moab, UT – A newlywed Utah couple Kylen Schulte, 24, and Crystal Turner, 38, known for their love of the outdoors, often camped and traveled together in their van. So, a summer weekend trip into Moab National Park wasn’t out of the ordinary for them. But while they were enjoying their evening on Thursday, August 19, things took a dark turn once nightfall crept over their campsite. As the sun went down, the women began to take note of a “weirdo” camping in the next site over. He had reportedly been observing and following them throughout the day, and as dusk neared, they started to worry about their safety. Friends reported getting texts and calls from the couple, informing them that they would be moving from their campsite to another location due to the strange nature of their neighbor. This was the last anyone heard from them.

The police were alerted the following Monday, when Turner failed to show up to work. The bodies of two women were discovered not far from Moab on Wednesday morning, August 25, in the South Mesa of La Sal Loop Road. Medical examiners later confirmed the identities of the women to be Schulte and Turner, the cause of death for both being gunshot wounds. The investigation remains open, as police have not as of yet made any arrests in response to their deaths, nor have any suspects been identified, and so the killer is still on the loose. Furthermore, the Grand County sheriff’s office issued a statement that it believes the crime to be “an isolated incident” with no “current danger to the public.” The lack of a more serious investigation points to flaws in the justice system when it comes to protecting women, and particularly LGBTQ+ women. What would motivate a stranger to murder? It’s the elephant in the room, the factor police are hesitant to talk about. Schulte and Turner were Lesbians. If this murder is in fact the result of a hate crime, then the minimization of the case indicates a much more deeply rooted issue in the Grand County community.

The families of Schulte and Turner remain in shock. Bridget Calvert, Schulte’s aunt, spoke to the SGN about her niece, saying, “Kylen was pure and kind. She shined love everywhere she went. She also carried Christ in her heart. She would reflect on her relationship with God and knew she could always trust in her faith.” Schulte and Turner were adventure lovers at heart. The two loved to travel and see the world, and spending time in nature was a favorite pastime for them. It was also clear to everyone who met them that Schulte and Turner were soulmates. Calvert reflected on their special bond: “I never knew Crystal as an individual. I only knew her as a couple with Kylen, and boy, were they one from the start.” (Seattle Gay News – Lindsey Anderson at http://sgn.org/sgnnews49_36/page13.cfm)