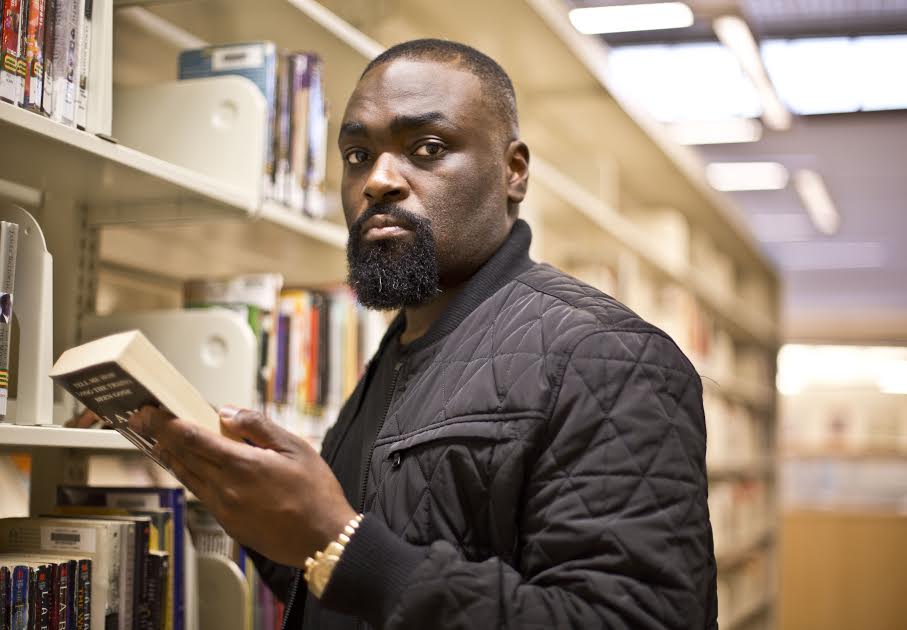 It’s no exaggeration to say that 2018 looks to be Roy Kinsey’s year. The release of his brilliant new album Blackie: A Story by Roy Kinsey (Roykinsey.com) in February was followed by well-deserved positive attention from NPR and Billboard magazine. And rightfully so. The gay Chicago-based rapper (and librarian) has crafted an album that is representative of the way that queer rap artists are evolving as rapidly as their straight counterparts. Roy was kind enough to answer a few questions about the album and his career in April.

Gregg Shapiro: You first crossed my radar in 2013, when you were putting out your debut album. How would you say that your songwriting has progressed since then?

Roy Kinsey: This time around, there was a lot more editing. I now look at it as me reviewing my life, and my work. When I would create in the same ways that I was used to in the past, I found myself growing increasingly frustrated. This is also the first sober album that I made. So, coming into that realization that I personally had to have a clearer mind to create in the ways that I wanted to was something I needed to learn. I am still learning how to set time aside to rehearse. As I’ve aged, there are changes in vitality, and energy, and responsibility. Life has informed my creations. It took a more disciplined me to create the Blackie album.

If I remember correctly, you were also scheduled to do a show with queer rap duo Yo Majesty at that time. Do you recall what that experience was like for you?

It was so long ago, but to be able to share the stage with black queer hip-hop legends was great.

As a queer male voice in hip-hop, what can you tell me about your personal musical influences?

I can say that every influence that I have had, as everyone in hip-hop, has delivered a detailed account about how life was where they grew up. You learned about their neighborhood, what worried them, and how those things shaped their lives and who they are. I wanted to take that model and superimpose it on my work. Specifically, in this political climate, where black men are killed by the police, and nobody has to be accountable for it, which is not new, I was influenced by Kendrick Lamar, using his artistry and creativity to bring light to violence in his community, and his country.

Would you say that calling your new album, blackie: a story by roy kinsey, a “story” is a bit of a nod to your day job as a librarian, where you are surrounded by stories in books?

Absolutely, it is. I’m glad you caught that. It’s also the fact that I wanted to tell the story of black folks in America from the time of my grandmother’s birth to the present. The album highlights the Great Migration, which is how my, and millions of other black folks got to the north from the south. Not feeling at home in their own homes, being pushed out of the south after slavery and sharecropping, escaping lynchings and discrimination, the place they had known was uninhabitable. I was influenced to create this art, to tell my grandmother’s story after she passed away in 2016. When I began researching her life and times, I began researching my own.

What did it mean to you to have the song “Mississippi Mud” chosen as one of Heavy Rotation’s “Ten Songs Public Radio Can’t Stop Playing” in March 2018?

It meant a lot. I get much support from public radio in Chicago; to be recognized by NPR was just fantastic. My music is played daily on public radio and that feels so good.

Speaking of “Mississippi Mud,” Mississippi is a presence throughout the album. Please say something about the role of Mississippi in your daily life and your creative life.

Well, my grandmother and mother were born in Mississippi. Black folks left Mississippi to come to places like Chicago, New York, and California. Chicago is a blues city, and that sound and those stories shaped the feeling here. The sadness, depression, trauma in the souls and sounds of my ancestors has had a big influence on me as a person; in ways that I see, and new ways that I learn. Those are just a few.

Earlier I mentioned influences. Can you please say something about the song “Jungle Book’s” reference to the Grandmaster Flash song “The Message”?

The song begs the question, “What do you do to keep from going under?” Not to sound cliché, but hip-hop saved me. I can’t imagine what I would do if I watched black folks being killed in America, as they are, and didn’t have a way to release that anger and that energy. It’s saddening and maddening. Chuck D called hip-hop “the black man’s CNN,” since many of our stories are not told by corporate media. We created hip-hop to acknowledge our ancestors and to tell the stories that we know that people like to forget. So, it’s an homage to hip-hop mixed with the latest black stories that are inaccurately told on the news.

Please say something about the James Baldwin samples in the songs “Great Aggin” and “For Colored Boys.”

Without my voice, I felt that none of these stories were being told as I could tell them. James Baldwin also had a way of cutting through to the heart of a situation, without all the bullshit and superfluous details that we tend to receive on a daily. When I talk about these issues, I talk about them and the dignity that God gave every human. The thoughts that James delivered, that I chose for this album, show how things have not changed from the time he said these quotes. And one must wonder, how two black queens from different lifetimes and time periods are saying the same thing. These messages are the same. Where you question what your role and future is in a country that you have given so much to. The contributions to American culture. It’s overlooked. James says this. I say this.

“MRMR” contains a couple of samples, the first being from the movie Willie Dynamite. Please tell me something about the inclusion of that.

In my healing and my transformation, I wanted to highlight the importance of what he was saying. The importance of vision. It was also part of black stories that I wanted to add. The entire story is a trip through being a black American from negro spirituals to blues to jazz and rap, blaxploitation eras, and afrobeat. I wanted it to be audio genealogy.

Singer/actor/author, and former Harlette, Jenifer Lewis is also sampled in “MRMR.” Please say something about your connection to Jenifer.

She represents a divine black feminine that is able to discipline and love you and be funny at the same time. She reminds me of my mother and grandmother. I learned that message and wanted to show that it was a key in my development.

What’s involved in your selection process of music samples?

My producer actually chooses many of the beats and sends them to me; or plays them in a session. It just has to feel right. If my mouth and body start moving to the beat, that’s how I know that’s the one.

During April 2018, you did some live dates at Chicago public libraries. April also happens to be National Poetry Month. Have any of your lyrics made their way into any literary journals?

I never thought about submitting to any publication. I would like to put them into a book of my own at the end of the year, though. A Blackie book of some writings and lyrics. Mainly lyrics.

The music video for your song “BSAYF” is incorporated in Aymar Jean Christian’s Hair Show. How did that come to pass?

They – Aymar, Wallace and Saya – created a show, and the story I wrote for the video fit perfectly. Through conversations between Wallace and Aymar, and all of us, we were able to collaborate and link our visions in a video produced by Aymar and Futurehood..

Do you have plans for additional videos for songs from Blackie?

I have plans to make videos for the story that is Blackie. I’ve been talking with Aymar about getting back to work.

Finally, would you say that homophobia is on its way out when it comes to hip-hop?

I’m not sure. Homophobia would have to be on its way out in America first. When people are discriminated against at their jobs, through government, and healthcare systems, those are things you can’t take. People can make music and tell their own stories. That’s what hip-hop is. When homophobia is affecting people’s access to humanity and their livelihood, there’s a bigger issue there.