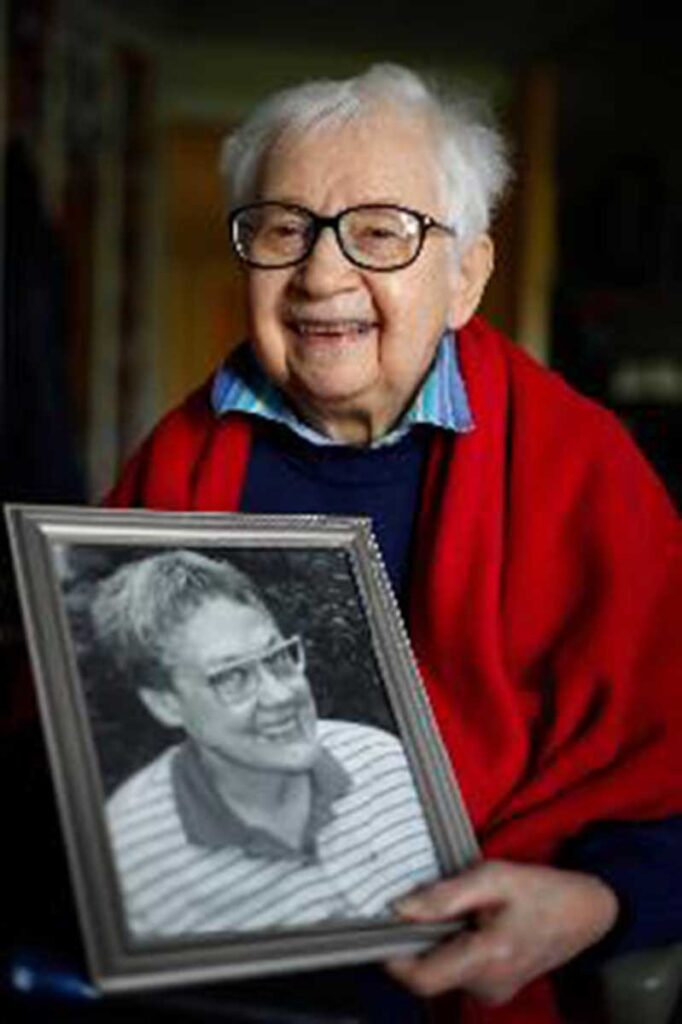 Philadelphia, PA – Kay Lahusen, 91, died in gentle hospice care at Chester County Hospital on Wednesday, May 26, 2021, after a brief illness. She was born in Cincinnati in January 1930 and as an infant was adopted and raised by her grandparents. After graduating from Ohio State University, she moved to Boston, where she met her lifelong partner Barbara Gittings at a Daughters of Bilitis picnic in 1961. They lived variously in New York, Philadelphia and Wilmington DE. They were gay activists from the early days of the Gay Rights movement in the US, marching openly in picket lines in Washington DC and Philadelphia in the early 1960s.
Kay became known as the first openly gay photojournalist. Her photos documenting these and many later activities were printed in various gay publications including Gay (a national weekly) and The Ladder. Her photos are archived in the New York Public Library, which drew upon them for the 2019 book, “Love and Resistance; out of the closet into the Stonewall era.” She researched and wrote the book “Gay Crusaders” (1972), which was published under her pseudonym Kay Tobin and with the addition of a male “co-author” (her friend, Randy Wicker) to help with its public acceptance. The original research materials for that book are also archived at the New York Public Library.
Kay and Barbara remained activists throughout their lives. After Barbara’s death, Kay continued to contribute to Gay history, giving many interviews, especially about their work with the American Psychiatric Association and the American Library Association. She collaborated in 2015 with Tracy Baim to produce “Barbara Gittings, gay pioneer,” a biography of Barbara which used many of Kay’s photos. She decorated her room at Kendal with dozens of photographs, and she would talk about her experiences as a gay activist at the drop of a hat. Her remains will rest in the Congressional Cemetery, Washington DC, along with her partner’s in a bench designed to express their love for each other and their dedication to showing that Gay is Good. Condolences may be left at foundsfuneralhome.com. (Philadelphia Gay News at https://epgn.com/2021/05/26/katherine-kay-lahusen-the-first-openly-gay-photojournalist-dies-at-91/)