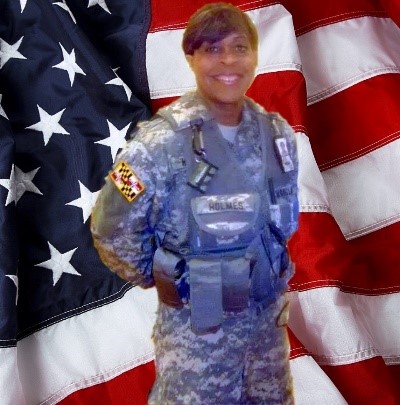 Getting sworn into the Maryland Defense Force (MDDF) as a state guard soldier one evening in November 2011 was something I’ll never forget. This is Maryland’s state defense force. The MDDF is organized as a volunteer military organization, parallel to the Maryland National Guard, which it is designed to augment during stateside emergencies. Before getting into my journey with MDDF let me take you back to August 2011.

It was a summer day in August when I was with the Prince George’s County Community Emergency Response Team (CERT). The CERT program trains citizens to prepare for emergency situations in their communities. When a disaster strikes, CERT members give critical support to first-responders, aid to victims, and organize spontaneous volunteers at a disaster site. So, on that sunny day, our group headed out to Baltimore County for a CERT Rodeo, with competing teams from other Maryland counties. When we arrived at the Baltimore County Fire Academy, I pulled together my own six-person team for the events. Throughout the day, my team was kicking butts, winning four awards. Later that day, three soldiers with the MDDF who were watching the events – a captain, staff sergeant, and a sergeant – talked with us. They told us about a special team they were putting together within MDDF’s Honor Guard. The unit would be doing search and rescue (SAR) for the state of Maryland. Since one of the components to CERT is SAR, that caught my interest.

Now back to the evening in November 2011 when I was sworn into the MDDF as a soldier, with the as a corporal with the honor guard team. Later that night I was given my welcome packet to the MDDF, with the guidelines, rules, and regulations, which followed Army customs. In reading the guidelines, I saw that it said female soldiers could not wear makeup, eye color, and nails that were painted. After I saw that I said to myself, “Let me out of here!” Well, that thought went out of my head real fast. No one knew that I was transgender, since all my paperwork had my new legal name. That included my passport (which I could use instead of my birth certificate) to join. I had to get a physical before next drill and the nice thing about doing that, I could see my own doctor.

At the next drill my Honor Guard Team started our training with wilderness first-aid and SAR training, along with honor guard training. I also had to go through initial entry training (IET), at the end of which I received the leadership award. After my first year with the MDDF in December 2012, at the holiday ball, I was awarded the Non-Commission Officer (NCO) Soldier of the Year Award. In November 2013, I received Soldier of the Year Award, given by the State Guard Association of the United States (SGAUS). After receiving these prestigious awards, I knew my work wasn’t done. I was now on a mission. My mission was that while receiving these awards both in 2012 and in 2013, a lot of the female soldiers were coming up to me saying, “Great job, you’re doing it for us”! Little did any of them know I was transgender. The comments were true I thought, but I am saying to myself, I am also doing it for the transgender community, which I couldn’t come out and say. During my time with the MDDF I served doing work in morale, welfare, and recreation (MWR) as well as honor guard, and later was part of force protection (FP). I subsequently received my military emergency management specialist (MEMS) badge. I was then assigned to work in the Maryland Joint Operations Center (MJOC) at Maryland Emergency Management Agency (MEMA). When I had to stay at the barrack for the first time, I worried about the shower area. I came up with a game plan, which worked out well in case I wasn’t the only person in the shower. This is one of the main issues I feel that any trans soldier must worry about while serving due to no curtains around each shower head.

Over the next three years with the MDDF I have presented the flag at events and parades, while working FP. My team with FP received a commendation one drill for helping with an accident outside our gates in Baltimore.

After the interview several of my fellow soldiers came up to me saying that they loved my interview and were in full support. Some of the soldiers were even saying, “You’re not only a good soldier, but you’re a good friend”. During my time with the MDDF I receive two promotions, retiring with the rank of staff sergeant. Serving with the MDDF was awesome due to the men and women I served with – my battle buddies – and who were also my friends. Later in January 2016, I retired from MDDF.

In the next article I will talk about the challenges and changes I have faced since my transition. Remember one thing … Shoot for the moon and even if you miss you’ll be among the stars! t