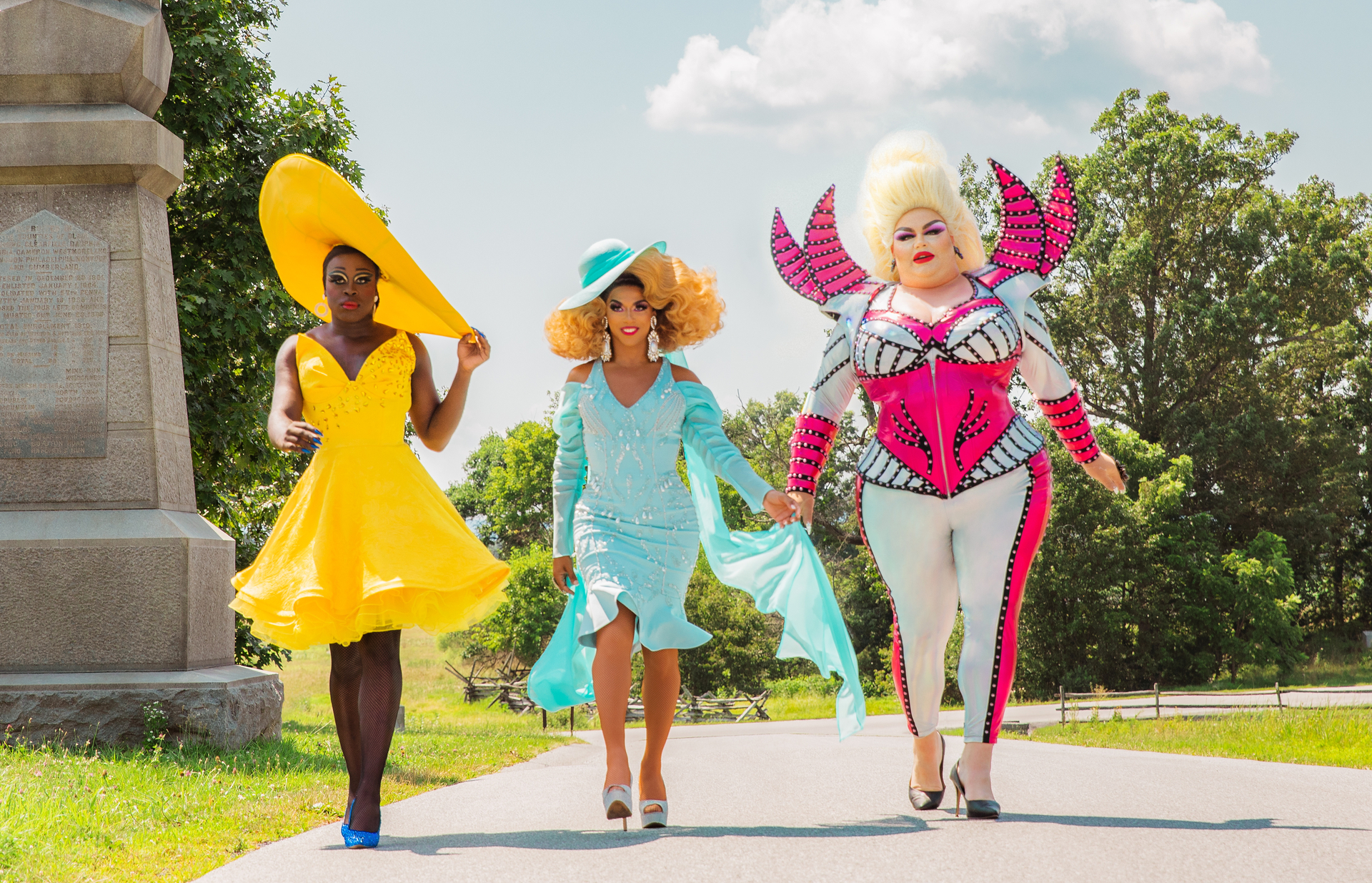 Say what you will about RuPaul, but he certainly deserves credit for bringing the art of drag into the mainstream. Yes, there have been drag performers in the past who had some fame from nightclubs and the occasional TV appearance, but RuPaul really helped make drag acceptable and accessible to people who otherwise may not have had the opportunity to see a drag show. RuPaul’s Drag Race has also been instrumental in bringing drag out into the open on television where a man in drag was usually straight and the drag was used as a derogatory punchline. Now shows like The CW’s Katy Keene has a series regular character who is a drag performer, and Riverdale recently paid homage to Hedwig and the Angry Inch, while Netflix streamed AJ and the Queen starring RuPaul. The TLC network aired a pilot last year titled Drag Me To the Altar in which four Drag Race queens helped a nervous bride prepare for her wedding day, and the show recently debuted as a regular series under the new title Dragtastic! And now HBO is getting in on the act with its new docuseries We’re Here.

We’re Here stars Drag Race Season 8 winner Bob the Drag Queen along with Eureka O’Hara and the irrepressible Shangela as they travel the country visiting small towns to help people in need regardless of how they identify. The series will run for six weeks on the premium cable channel with the first episode making its debut on April 23. HBO made the first three episodes available for review and they are wildly entertaining, informative and heart-tugging.

The first episode takes the queens to Gettysburg, PA where they meet young, gay makeup artist Hunter; an African American, straight college admissions officer, Darryl, who wants to tell a story of race in America while being a strong ally to the LGBTQ community; and Erica, a conservative Christian mother whose daughter recently came out as bisexual. In each episode, each queen takes on one of the subjects as their ‘Drag Daughter’ to help them work through their issues with the power of drag. Here drag is not a joke, it’s therapy. Hunter wants a better relationship with his dad and the challenge is talking dad into participating in a drag show with his son and the others. Darryl is completely open to being a drag daughter, but the toughest case in this episode is between Erica and her daughter, especially since Erica was one of those Westboro types who made it a habit of attending Pride events with her church group and telling everyone they were going to Hell. But her behavior caught up with her when her daughter came out and moved in with her father. Seeing how her own behavior affected their relationship, Erica wants to be in the drag show not only as an apology to her daughter but to the community as well. The question that hangs over it all is will her daughter show up?

The second episode moves to Twin Falls, Idaho, a predominantly Mormon community. Bob takes on three drag performers – Owen, Michael and Amelia – who are rough around the edges and only get together once every couple of months to prepare for their shows. Michael, aka Lucid Dreams, is probably the standout of the group and the one Bob spends the most time with. Michael’s story is that he’s left town a couple of times but has always come back to take care of his grandfather … who steals the spotlight by being completely opposite of what you’d expect. He fully supports his grandson’s ambitions and give the thumbs up or down on the outfits Lucid Dreams wears. These two have a wonderful relationship, but poor Michael is still so lonely in this town that it hurts his grandfather’s heart as much as it does the viewers’. You just want to jump through the screen and give Michael a hug. Other subjects in this episode are Clifton, a straight musician wanting to make amends for his past by testing the definition of masculinity, and trans man Brandon and his wife Mikayla, who are hoping for a wedding experience they didn’t have the first time due to the rejection from their ultra-conservative families.

Episode Three brings the queens to Branson, Missouri, the heart of the Bible Belt, and not a place that welcomes drag queens with open arms. When they arrive in town they are met with a lot of opposition when trying to find a venue for their show. This time they take on Tanner, a young musical theatre performer who identified as queer until he returned home to Branson where he found God and now identifies as Christian, which puts him at odds with himself and his non-believer mother. Then there is Charles, a classically trained dancer who wants the community to know he’s out AND proud, and Chris, a father with mental health issues who was always told by his father that real men don’t show emotion, but he needs to be able to have that emotional connection with his young daughter.

In each town, the queens set up camp with their own areas and put their subjects through drag boot camp, give them a bit of emotional therapy and try to connect with the family members who may also be at the root of their drag babies’ issues. Each of the queens is able to bring some tough love to the table, but they also show a lot of empathy, and for my money Miss Shangela is the standout among the three. She really seems to connect with her students and their family members, offering up real heartfelt advice to try and heal everyone’s deep emotional wounds.

Now this type of show isn’t reinventing the wheel. There have been plenty of shows through the years where a person or a team of people would swoop in to help someone in need (think Queer Eye for the Straight Guy). It’s interesting to have two series premiering in the same week that feature Drag Race stars helping people through drag. The biggest difference between the TLC and HBO shows is the tone. Like most of the TLC shows, like Say Yes to the Dress, the pilot for Dragtastic! felt a bit scripted and over-produced, complete with music cues to let you know when and what emotions to feel. We’re Here lets the people tell their stories with minimal use of music, allowing the queens and the viewers to really connect with them, to feel what they’re going through. No matter how you identify, there is probably someone here that you can connect to or see yourself in, and perhaps their journey through the episode will speak to anyone watching who needs that bit of encouragement to let themselves be out and proud or change the way they see LGBTQ people.

Each episode of We’re Here does conclude with a drag show, and you hope that each of the subjects will come away feeling better about themselves or about the family members they’ve hurt or been hurt by. Will each one have a happy ending? Well, you’ll have to tune in to find out. We’re Here has a great cast, they’ve selected their subjects with care, and the production never feels preachy, giving us honest and sometimes raw emotion, so you may need a tissue or two. I thoroughly enjoyed the first three episodes and I eagerly look forward to seeing the last three, and I hope enough people tune in to let them do it again for a second season.

We’re Here airs Thursdays at 9:00 PM on HBO, and will also be available on HBO Go and HBO Now.