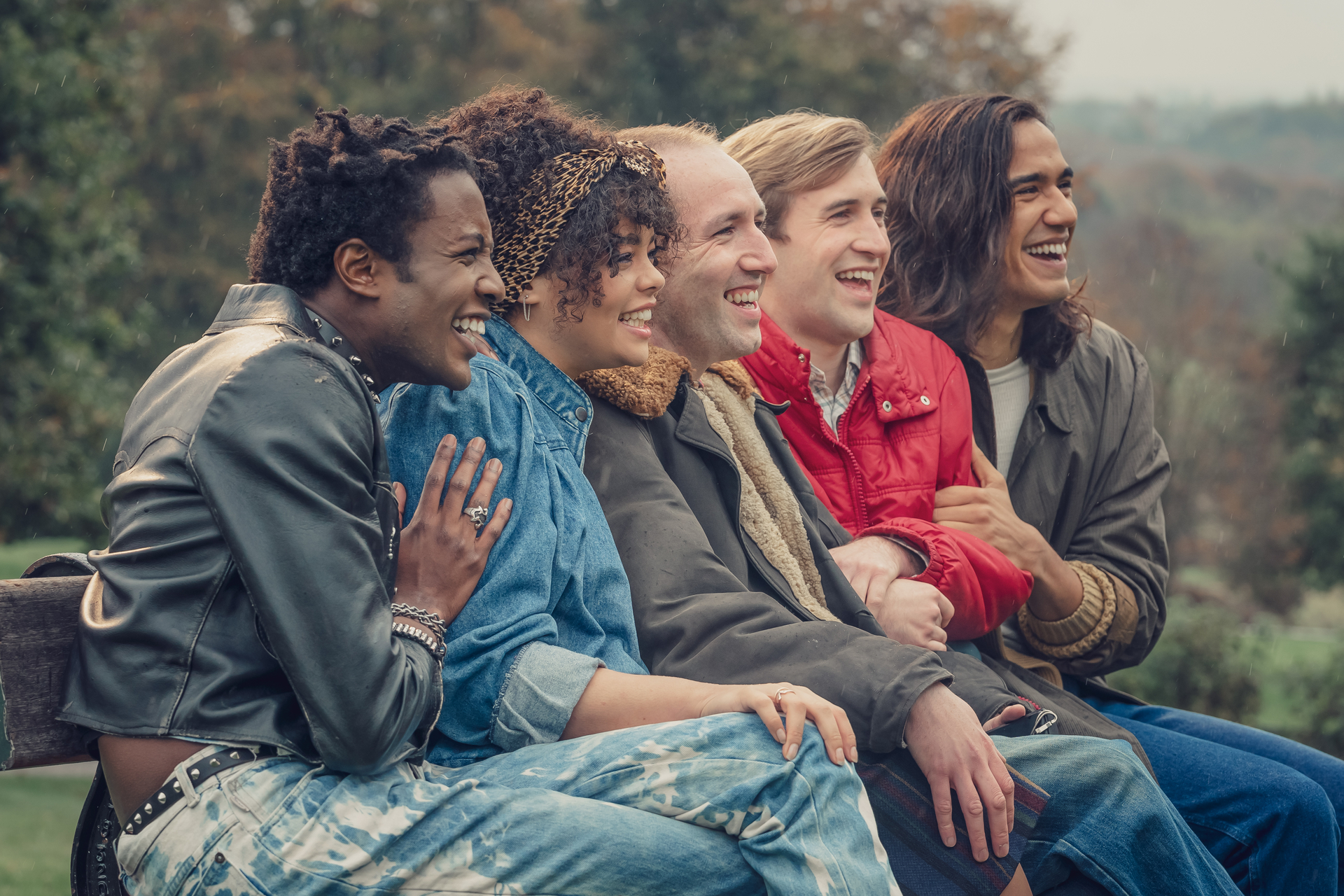 HBO Max has been making good investments when it comes to bringing TV shows from the UK to the US, and now they are presenting the critically acclaimed limited series It’s a Sin from Russell T. Davies, the man behind everything from the original UK Queer as Folk to Doctor Who and Torchwood, Banana, A Very English Scandal and Years and Years. Davies is known for bringing LGBTQ stories and characters front and center with grace and humanity, never sensationalizing the subject matter for prurient interests. And he’s done the same with his latest series.

The five episodes of It’s a Sin span a period of ten years, from 1981 to 1991. The first episode introduces us to the main group of characters — Ritchie, Ash, Roscoe, Colin, Jill and Gregory — before they meet each other and become fast friends. Ritchie and Roscoe, in particular, are leaving their family homes under different circumstances. Ritchie needs to leave the Isle of Wight for London so he can stop hiding his sexuality and pursue his acting career. Roscoe’s family discovers he’s gay and he leaves before things become volatile with his family. Colin is deeply closeted and comes to London for a job as a tailor’s apprentice. Everyone basically meets at a local club, Ritchie the most outgoing of them all, not only drawing in the people who will be his chosen family, but having more than his fair share of the boys in the bar.

It’s 1981 and everyone is carefree. There is talk of some mysterious disease sweeping through the gay community in America, but they’re in London and everything is fine. Until it isn’t. Over the next four episodes, the ‘gay cancer’ is beginning to spread, and while Ritchie is in denial about it, he does eventually have to face reality as more and more of his friends begin to die, including those closest to him. While Ritchie pretends everything is fine, his friends are becoming more and more active in AIDS activism, but Jill in particular — the only female of the group — begins to take on the role of caregiver as well, helping a stricken friend with food and chores, while taking time to visit both friends and strangers in hospital, seeing with her own eyes how almost all of them have been abandoned by their families. Things really cut close to home with one who is confined to a ward for the infectious with no one allowed in and the patient not allowed out, basically a prisoner left to die alone. It’s quite horrifying — and based on fact — and Jill springs into action to free her friend and make sure this never happens again.

It’s a Sin is a brilliantly crafted show that is incredibly painful to watch, especially if you’ve been one of those to have lived through the 80s and 90s, watching friends contract the disease and whither away. Several scenes in the series triggered me, especially the moment Jill gets a phone call that a friend has passed away. I had that same experience and all these years later it doesn’t get any easier to accept. So be warned, but don’t let that keep you from watching. Just have a box of Kleenex near by. Or two.

Aside from Davies’ excellent scripting and Peter Hoar’s masterful direction, not to mention the production design, costumes and hair, and excellent soundtrack of the top 80s hits (there are a lot more 80s songs here than in Wonder Woman 1984), It’s a Sin succeeds in its casting, and it’s astonishing to see that the majority of the main cast only has this or one or two other small parts to their credit. The casting team did a brilliant job of finding virtual unknowns and giving them this amazing showcase. There is not a false note among them.

Callum Scott Howells makes you fall instantly in love with the innocent Colin, and you really feel protective of him when it becomes clear that his boss at the tailor shop is a pervy predator, from forcing Colin to take of his shirt to wash his hands (supposedly to get all the tiny threads off) to coming on to him during a trip to New York City. Omari Douglas’ Roscoe may be the hardest character to like because, while his heart is in the right place when it comes to his friends, Roscoe is not above using others in power to do better for himself without realizing that one of those people is just using him too.

The real focal points of the series, the characters everyone else revolve around, are Ritchie and Jill. Olly Alexander has the longest list of credits of any of the main group, but this is certainly his star-making turn. From his yearnings to live his truth under a roof of oppression at home, to his wildly boisterous lifestyle in London, from the denial to the acceptance of the AIDS crisis, Alexander really has a complex character to play. Ritchie can be infuriating and annoying, but he can be vulnerable as well and Alexander plays the character to perfection, always keeping him interesting even when you want to shake him into reality.

The heart and soul of the group is Jill, played by Lydia West. Like Ritchie, Jill is also an actor and even books a part in a long running musical, so she has some sort of job security. Her personal life is firmly devoted to her friends. Ritchie often drags her home for emotional support, allowing his family to think she’s his girlfriend (even though she is quite blunt with them that she is not … but they prefer to side with their son). She and Ritchie manage to save enough money from their acting gigs to buy the flat they and their friends have been renting, which they call the Pink Palace, and she begins to take on the role of den mother. It’s Jill who has to get the boys to wake up to the reality of AIDS, and it is she who often has to either hand-hold or face the wrath of a parent who just discovers their child is dying. West is just brilliant as the glue that really holds it all together.

I need to give a shout out to Keeley Hawes as Ritchie’s mother Valerie. The character at first just seems to come off as a bit oblivious, either really unaware that her son is gay or simply in complete and utter denial. Later, she becomes a force of rage under some dour circumstances, directing most of her anger at poor Jill (and her husband), and making some terrible decisions in the end that leave Jill with her own anger and resentment towards this woman she’s always been on friendly terms with. Hawes is just ferocious, a true force to be reckoned with, and she just takes your breath away when her inner ‘Tiger Mom’ is unleashed.

It’s a Sin is a painful watch, but it’s necessary as well. Younger people today in the LGBTQ+ community don’t often know their history. That’s true for many young people who think that history only began when they were born. And with the advancements in medical research that has been able to produce new medicines that have held the scourge of AIDS at bay, we still need to be reminded that it hasn’t gone away. There are too many Ritchies in the world today who believe they are invincible, or who don’t think HIV is a thing anymore because it doesn’t get talked about a lot so they engage in irresponsible behavior. Aside from being a piece of entertainment, a dramatized document of an era long gone, It’s a Sin should be required viewing, to be used as a teaching tool to remind people that it only takes one careless act to put their lives in danger. Hopefully people will be drawn in by the craftsmanship of It’s a Sin and come away with a better knowledge of the era and apply that to the present.