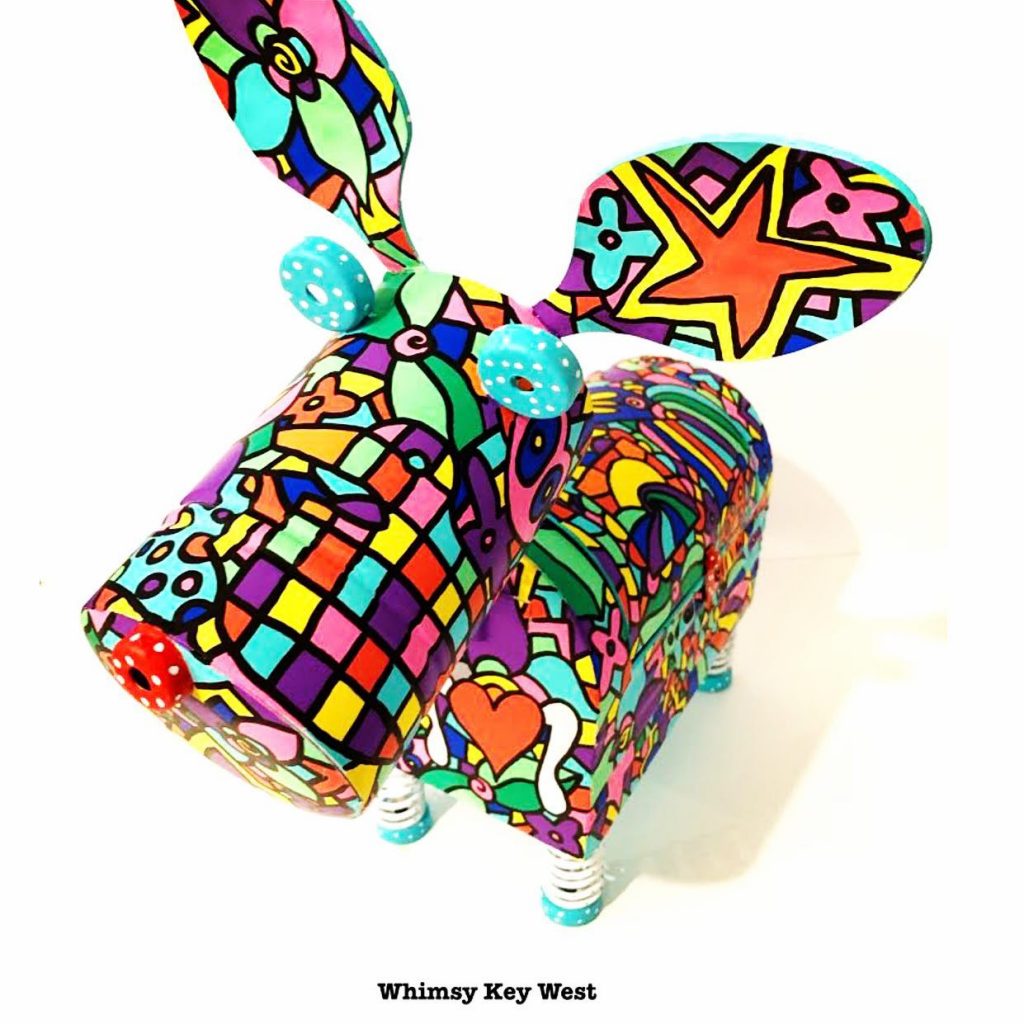 Kevin Assam: When life gives you lemons, is it your responsibility to paint them in even more vibrant shades and figures?

Barb Sage: Without a doubt. I’ve been through it all: divorce, parental death, being a single mom, my daughter’s drug addiction. The list goes on. If it wasn’t for this amazing island and a positive attitude I wouldn’t have made it this far. I’m not unique in lemons. We all have them. Life on life’s terms  –  lemons  –  brought art into my life.

What were the earliest objects you found yourself trying to rework or improve as an adolescent?

I have no clue. I was a drunken train wreck throughout my adolescence. I quit drinking when I was 21. I remember anything after that! [laughs]

Is part of the allure of alcohol the presentation and aesthetics? It can be a beautiful thing, right?

I’m sure that’s part of it for some. When I drank, it was Boone’s Farm Strawberry Hill, “Mad Dog” 20/20, and “Natty Boh.” I was young and was more looking for the effect. I loved bars and clubs in Baltimore and DC and that’s what the people I hung out with did.

I grew up in Annapolis, Maryland. My household was pretty normal. My parents were together. We lived in a nice neighborhood. My dad worked for Pepsi and my mom was a waitress. Dinner was on the table every night. Vacation was once a year. Everyone always hung out at my house because it was easy to sneak out. That type of thing. My first year of high school, we moved to Arnold to “keep me out of trouble.” That didn’t work out well for my parents, and after high school they moved to Severna Park and I kept going to Baltimore. I lived and bartended in downtown Baltimore until I moved to Key West around 1998.

What happened when you were at the edge of 17?

The edge of 17. Let’s see. My first DWI! According to the judge  –  since I blacked out  –  I was crossing a major intersection in Baltimore and stopped in the middle of the street. Foot on the clutch. Car in gear. Napping! They couldn’t wake me. Apparently, given the amount of alcohol in my system at 100 pounds soaking wet, I should have been dead but I woke up and was functioning. I don’t remember most of that. Probably should have been the first red flag, don’t you think? [laughs]

Is the idea of a domestic goddess outdated?

My house needs to be in order for me to think straight. However, I can’t cook to save my life.

How much of your kitchen related fiascoes do you imagine have harmed the environment?

Most likely all of them! Twice the fire department has come to my house because the oven caught on fire.

Tell me about these dirty audiobooks you frequently purchase.

Ahh, my books! That’s my guilty pleasure. I read a ridiculous amount. All dirty. At one point I’m sure I had the largest dirty book collection in the Florida Keys. Then I discovered the Amazon Kindle and found out I could have the next in the series, immediately! I love instant gratification. I listened to the audiobooks while I was working on my art at night or between guest houses during the day. I have about 600 audiobooks. That’s insane by anyone’s standards.

Was 50 Shades of Gray any good?

I read it in two days on a ferry on my way to the BVI’s. I liked it. Hated the movie though. WTF was up with those actors? I’ve seen more heat on HBO.

How idle were you when you launched Whimsy Key West?

[Laughs] No one would ever use the word “idle” for anything regarding me. I’m a go-er. I’ve been painting mannequins for a long time and started Whimsy Key West at the encouragement of two artist friends. I thought because I didn’t have an art background that I wasn’t considered an artist. I was doing commissioned fun stuff for people but not charging much because I didn’t feel worthy  –  or whatever nonsense I told myself. In February, I made my art public and went into it feeling that if people liked it, I will sell it. It’s been a period of discovering my worth and learning that the marketing for my art is very different from what I do during the day. There’s a reason people pay people for websites and social media because that’s a full time job! I’ve worked my day job and then come home and wanted dinner, showered, and worked in some form on Whimsy till 2 am almost every night since. There’s always something to do!

Do you paint your creations onto mannequins because you secretly feel alone and want the company?

[Laughs] No. I’m surrounded by people all day. I need to balance it with quiet at home. I started painting the mannequins because I got one at a yard sale and wanted to see if I could do it after I drove it around in my car for a week because that was too fun. Mannequins were easy to work on because I could work on one piece at a time. An arm here. A leg there.

What body part is the most difficult to paint?

Hands! Lots of cracks and crevices. The funnest are bent mannequins. Friends would walk in and see a lady with her ass in the air on my couch. My home is an interesting place!

All of Europe. England specifically because I love boys with British accents and taking a few months off to drive cross-country in an RV with no real plan.