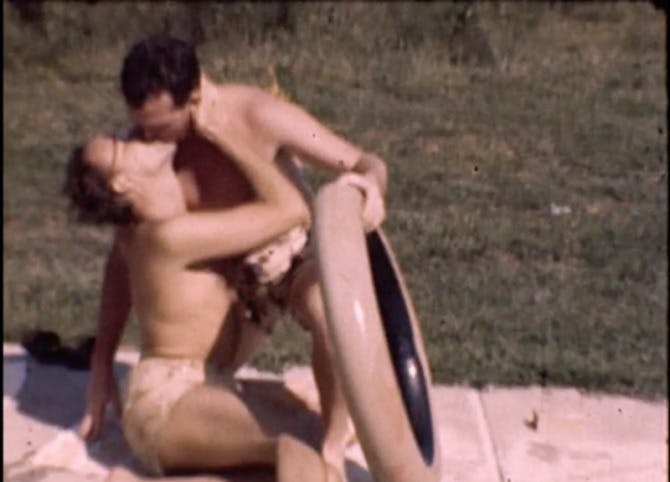 St Louis, – Footage of a gay pool party in 1945 surfaced online and it’s pretty incredible. The lost home videos were discovered by Geoff Story, a filmmaker from St. Louis. He tells Nancy Fowler at St. Louis Public Radio that he stumbled upon them 20-some years ago at an estate sale of the now-deceased Buddy Walton. Walton was often referred to as St. Louis’ “hairdresser to the stars” and did hair for everyone from Eleanor Roosevelt to Ethel Merman whenever they passed through town. He was known for throwing lavish pool parties at his property.

“These men are still in their 20s in the sun, swimming, like they always will,” Story says. “There’s a real sweet pain, and when you watch it, there’s a happiness but you can’t believe it’s so long ago and you can’t touch it–it’s gone.” Finding the footage sparked an idea for a documentary. Story set out to find gay men who were alive in the 1940s and talk to them about their lives and experiences.

His new film Gay Home Movie, which he’s currently working on, offers a rare peek into a largely invisible world when LGBTQ people were forced to live and love in the shadows. Story has high hopes for the documentary, which has already captured the interest of gay Hollywood exec Brian Graden, best known for his role in developing South Park. “It speaks to a wide array of people on a very deep level,” Graden tells Fowler. “What are the chances someone would go to an estate sale and pick up these canisters of old footage? It’s almost like these men are trying to talk to us from beyond the grave.” (Queerty – Graham Gremore at https://www.queerty.com/footage-gay-pool-party-1945-surfaced-online-pretty-incredible-20180118)