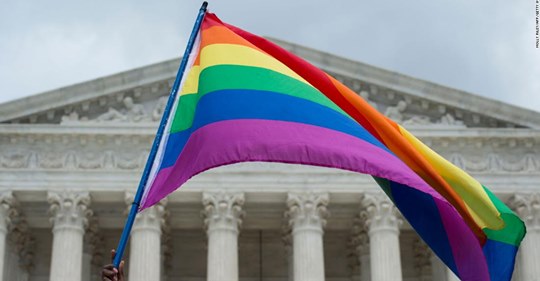 Washington, D.C. – The US Supreme Court has ruled LGBTQ workers are protected under federal law. The justices’ decisions came in three cases and will impact millions of LGBTQ workers. Two of the cases concerned employees who said that they were discriminated against based upon their sexual orientation. The third case was about whether an employer could discriminate against workers because of their gender identity. Although the ruling is a great victory for LGBTQ communities, two of the three employees died before their claims of unlawful employment discrimination were vindicated.

The court held that the Civil Rights Act of 1964, which prohibits sex discrimination, also applies to discrimination on the basis of sexual orientation and gender identity. The justices voted six to three in favor of the LGBTQ workers with conservative Justice Neal Gorsuch surprisingly ruling in favor of the workers and writing the majority opinion. He was joined by Chief Justice John G Roberts Jr, and Justices Ruth Bader Ginsburg, Stephen G Breyer, Sonia Sotomayor and Elena Kagan.

“Today, we must decide whether an employer can fire someone simply for being homosexual or transgender. The answer is clear,” Gorsuch wrote. “An employer who fires an individual for being homosexual or transgender fires that person for traits or actions it would not have questioned in members of a different sex. Sex plays a necessary and undisguisable role in the decision, exactly what Title VII forbids. Those who adopted the Civil Rights Act might not have anticipated their work would lead to this particular result. Likely, they weren’t thinking about many of the Act’s consequences that have become apparent over the years, including its prohibition against discrimination on the basis of motherhood or its ban on the sexual harassment of male employees. But the limits of the drafters’ imagination supply no reason to ignore the law’s demands. When the express terms of a statute give us one answer and extratextual considerations suggest another, it’s no contest. Only the written word is the law, and all persons are entitled to its benefit.” He wrote, that discrimination on the basis of “[a]n individual’s homosexuality or transgender status is not relevant to employment decisions. That’s because it is impossible to discriminate against a person for being homosexual or transgender without discriminating against that individual based on sex.”

Justice Samuel Alito, began his dissenting opinion, which was joined by Justices Clarence Thomas and Bret Kavanaugh, with a dart aimed at his conservative colleagues. “There is only one word for what the Court has done today: legislation. The document that the Court releases is in the form of a judicial opinion interpreting a statute, but that is deceptive.” He than notes that decades of attempts to expressly add sexual orientation and gender identity to the list of federally protective classes has failed. “For the past 45 years, bills have been introduced in Congress to add “sexual orientation” to the list,1 and in recent years, bills have included “gender identity” as well.2 But to date, none has passed both Houses.”

The ruling is a major victory for fairness and freedom from discrimination. In 27 states, LGBTQ citizens have had no statewide recourse if they are fired or otherwise discriminated against based upon their sexual orientation or gender identity. According to the Williams Institute, of the estimated 7 million plus lesbian, gay, and bisexual workers (ages 16 and older) in the US, half of them – 3.4 million LGB people – lived in states without protections against sexual orientation discrimination in employment. Approximately one million workers (ages 16 and older) identify as transgender in the US and more than half of them – 536,000 people – lived in states without express statutory protections against gender identity discrimination in employment. All of that has changed as a result of this landmark decision

The Williams Institute reports that a recent study found that between 2012 and 2016, 9,127 charges alleging sexual orientation or gender identity discrimination were filed with the US Equal Employment Opportunity Commission. About half of them included claims of discriminatory terminations and harassment. That study also found proportionately more allegations of serious discrimination issues, including harassment, discharge, and retaliation, in states without antidiscrimination statutes.

The three cases are, R.G. & G.R. Harris Funeral Homes v. EEOC and Aimee Stephens, Altitude Express Inc. v. Zarda, and Bostock v. Clayton County.  Aimee Stephens worked as a funeral director at R.G. & G.R. Harris Funeral Homes and was fired when she informed the funeral home’s owner that she is transgender and planned to come to work as the woman she is. She died earlier this year. Donald Zarda, a skydiving instructor who also has died, was fired from his job because of his sexual orientation. Gerald Lynn Bostock was fired from his job as a county child welfare services coordinator when his employer learned he is gay. Bostock joined an extra-curricular gay softball league which became known at work and eventually resulted in his firing.

“There are truly no words to describe just how elated I am,” said Bostock. “When I was fired seven years ago, I was devastated. But this fight became about so much more than me. I am sincerely grateful to the Supreme Court, my attorneys, advocacy organizations like the Human Rights Campaign, and every person who supported me on this journey.” Bostock continued, “Today, we can go to work without the fear of being fired for who we are and who we love. Yet, there is more work to be done. Discrimination has no place in this world, and I will not rest until we have equal rights for all.”

“Finally. Today, the law, justice and fairness are on our side. Our nation’s highest court confirmed what Lambda Legal has argued for years, that discrimination against LGBTQ workers is illegal,” said Kevin Jennings, CEO of Lambda Legal, in a statement issued on the Lambda Legal website. “We have a long way to go in securing the full and undeniable civil rights of LGBTQ people, especially those in our community who are Black, Indigenous and people of color for whom their sexual orientation or gender identity is only one of many barriers to equal opportunity in this country. . .  The overwhelming majority of people in the country understand that discrimination is wrong, and so we intend to build on the momentum created by today’s decision to push for the comprehensive federal protections contained in the Equality Act, passed by the House of Representatives more than one year ago.

“This is a landmark victory for LGBTQ equality,” said HRC President Alphonso David. “No one should be denied a job or fired simply because of who they are or whom they love. For the past two decades, federal courts have determined that discrimination on the basis of LGBTQ status is unlawful discrimination under federal law. Today’s historic ruling by the Supreme Court affirms that view, but there is still work left to be done. In many aspects of the public square, LGBTQ people still lack non-discrimination protections, which is why it is crucial that Congress pass the Equality Act to address the significant gaps in federal civil rights laws and improve protections for everyone.”

The Equality Act updates existing federal nondiscrimination laws—including the Civil Rights Act of 1964, Title IX, the Fair Housing Act and provisions of the ACA—to confirm that discrimination based on sexual orientation or gender identity is unlawful. In addition to confirming these sex discrimination protections for LGBTQ people, the Equality Act also adds protection against discrimination based on sex, sexual or gender identity in public accommodations and federally funded programs. In May 2019, the U.S. House of Representatives passed the bill. The U.S. Senate has yet to take any action on the Equality Act.      Yes, the fight for full rights continues. But for now LGBTQ folk can bask in this perhaps unexpected victory that set the Twitter world—atwitter as soon as the good news began to circulate.