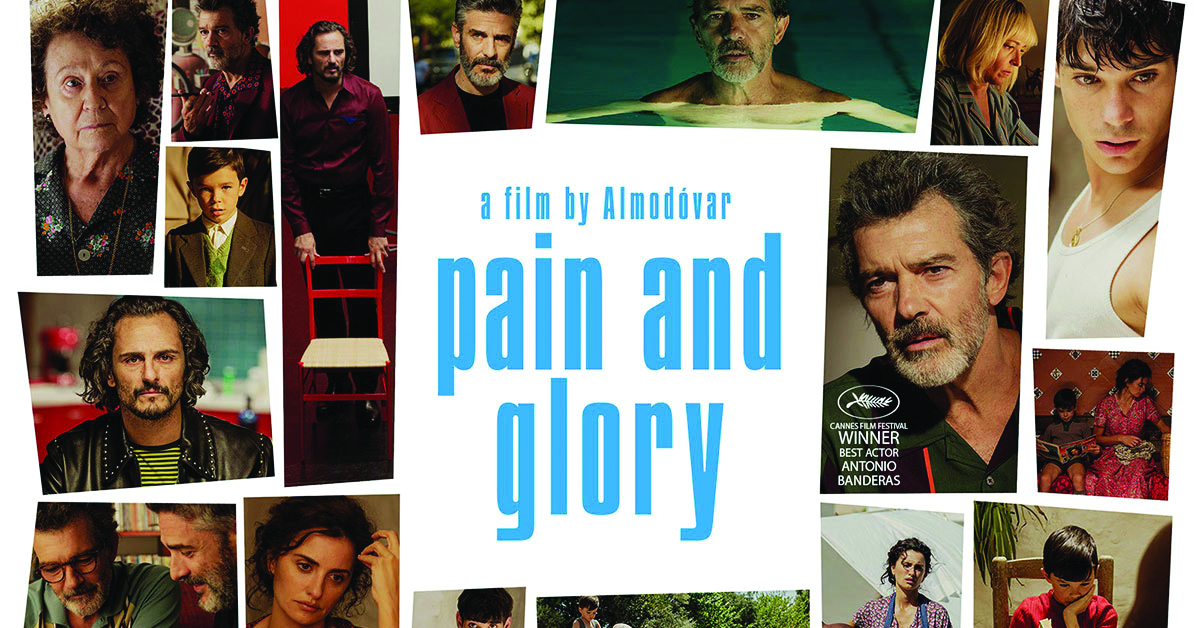 Even if you love Oscar-winning gay filmmaker (Pedro) Almodóvar (and who doesn’t?), you have to admit that his output in the 2010s (I’m So Excited! anyone?) has been less than stellar. Especially when compared to Volver (2006), All About My Mother (1999), or Women on the Verge of a Nervous Breakdown (1988).

With Pain and Glory (Sony Pictures Classics), Almodóvar has not only returned to his former glory, but exceeded it, as well. An intimate and personal amalgamation of several of the elements we have come to expect from an Almodóvar film (including a singing Penelope Cruz), Pain and Glory strikes the perfect balance between drama and comedy in ways that are unique to the writer / director in his marvelous portrait of gay writer / director Salvador (Antonio Banderas).

Flowing smoothly back and forth in time, from the present day where Salvador suffers from an array of debilitating physical ailments so painful that he has lost his passion for filmmaking to the past where young Salvador (Asier Flores) is doted on by his devoted and hard-working mother Jacinta (Cruz). Through these time transitions we watch Salvador develop from a bright. talented and precocious boy into a man who has lost his reason for living.

Just when he is about to give up, Salvador learns from actress Zulema (Almodóvar regular Cecilia Roth) that there is interest in a 30th anniversary screening of his acclaimed movie Sabor. This leads Salvador to reconnect with the movie’s male star Alberto (Asier Etxeandia), whose life revolves around smoking heroin. Salvador and Alberto, who had a tempestuous working relationship (due in part to Alberto’s drug use), make peace with each other. As a means of numbing his physical agony, Salvador begins smoking heroin with Alberto. As you might expect, this has a negative impact on Salvador’s life. Alberto, on the other hand, takes advantage of Salvador’s weakened state, logs onto his computer, and finds a piece of Salvador’s writing that he wants to adapt into a one-man show.

Further glimpses into Salvador’s childhood reveal that he often gave in to other’s whims, particularly those of his mother. On one such occasion, Salvador becomes the tutor of construction worker Eduardo (the muy guapo César Vicente) in exchange for work that needs to be done on the family’s catacomb residence. It is also during this time that we can see young Salvador developing his attraction to members of his gender.

Pain and Glory is also a movie about chance. For instance, Addiction, Alberto’s adaptation of Salvador’s story is playing to packed houses. One night, an audience member happens to be Federico (Leonardo Sbaraglia), the person about whom Salvador wrote the original story. In the midst of divorcing his wife, Federico reaches out to Salvador, the one and only man with whom he had a sexual relationship. They have a touching reunion, even sharing a passionate goodbye kiss. Another bit of happenstance occurs when Salvador’s manager Mercedes (Nora Navas) shows him an invitation to a gallery opening featuring Eduardo’s drawing of young Salvador reading a book. The various coincidences have a positive impact on Salvador, resulting in nothing less than a surprising happy ending.

Banderas is outstanding, down to his spiky Almodóvar-esque hair and scruff. There’s not a false note in his performance which ranks as one of his most Oscar-worthy. Cruz is also wonderful, as is longtime Almodóvar actress Julieta Serrano as the elderly Jacinta.