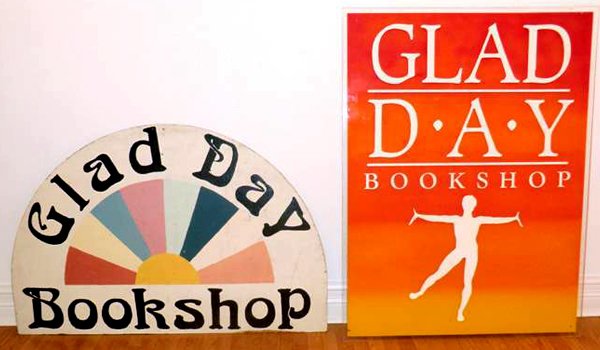 Toronto, Canada – David Hudson writes in Queerty that it’s sad to think that a couple of decades ago, there were dozens of LGBTQ bookstores around the world. Thanks to the internet, and rising rent prices, that number has dwindled significantly. Glad Day in Toronto, Canada, is believed to be the oldest gay bookstore in the world. Its history dates back to 1970 before there was much of an established gay scene in Toronto. It began life with activist Jearld Moldenhauer becoming a mobile library and hauling LGBTQ books around in a backpack to community meetings. In 1981, Glad Day took over a small, cramped second-floor space on Yonge Street. Despite the lack of space, it gained a loyal following who returned, again and again, to browse the books, magazines and comics, listen to readings, hold activism meetings or check the community bulletin board.

However, like other booksellers, the turn of the century brought fresh challenges. In 2012, 23 local LGBT community members pooled their resources to buy Glad Day in order to avoid closure. The new management and fresh injection of energy didn’t manage to solve all of the small store’s financial problems. In 2016, it was decided that a move to a new, bigger location was essential. It took over the former bar Byzantium at 499 Church Street. Although just a couple of blocks away from its current home, the premises are in the heart of the city’s gay district. The larger premises allowed Glad Day to offer more attractions, including a much-needed coffee store, bar, and performance space in the evening (many of the bookshelves are on wheels so can be moved to create more room). The move to the new premises proved successful, with the business now deriving 65% of its revenue through drink sales alone.

However, then Covid came along. Because of the pandemic, Glad Day has had to close its door for almost an entire year. Erickson says the impact of the last year has been “devastating.” “The rent in Toronto is very high, so we rely on our food and drink sales for the majority of our revenue. With the restrictions against bars as well as retail – we are left in a fragile and precarious position and look forward to a successful reopening and government support to keep us going.” The team have encouraged people to think about donating what they might have spent in-store each month, whether just for a coffee ($4.50) or drag brunch for four ($100). “Bookstores become like a home base for a lot of people’s journey of self-awareness,” Erickson recently told Thrillist. “It also ends up being a place where people can gather for free any time. The place where they can go where there’s a problem.” (Queerty – David Hudson at https://www.gaycities.com/outthere/53755/glad-day-north-americas-oldest-surviving-gay-bookstore/) [Ed. Note: As Gay bookstores proliferated in the 1970s and 80s, Glad Day opened a highly successful branch in Boston and was considering a store in Baltimore on the first floor of the Gay and Lesbian Community Center on Chase Street. Sadly, the plan fell through over an internal dispute at the Center. JB]