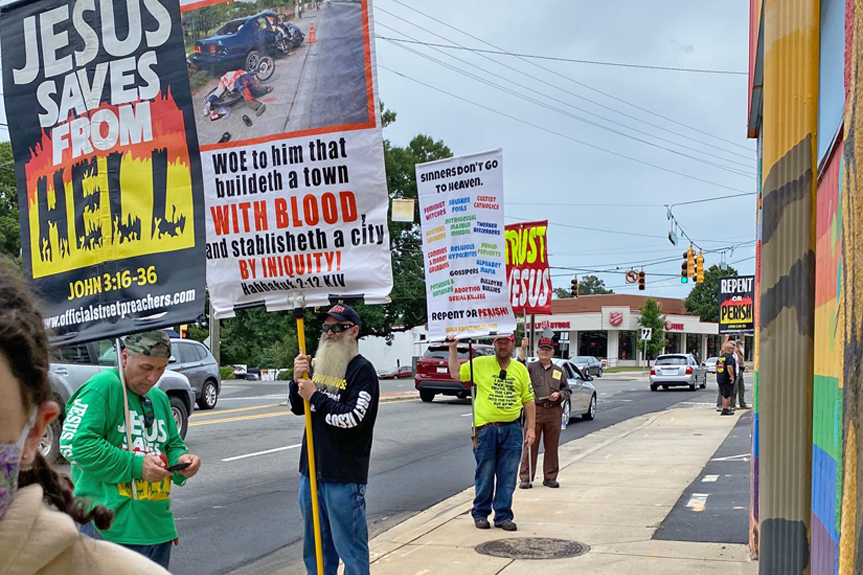 Charlotte, NC – On Aug. 25 around lunchtime, a group of mature white men with large signs of hate took to the sidewalk right in front of White Rabbit. Some of the man yelled at the top of their voices colorful words of hate and condemnation. They were extremely ugly to our customers and our staff. Then came the caring concern from our neighbors. The store’s neighbors poured out support for the store with love and compassion. A store employee described the scene.

Randi Salvatore said, “being from N.Y., things don’t scare me easily, and my self-confidence doesn’t make me doubt myself or ever feel ashamed of who I am. For that, I am glad that I was the person working . . .when at least nine older, white men showed up right in front of our store, White Rabbit, hollering, yelling and raising large signs with hateful, ridiculous words on them. They were loud and so full of hate, and spewing stupidity, such as “Repent, repent…you nasty perverts. Give God back his rainbow, faggots, you stole it a long time ago.”

The phone started to ring, and it was local neighbors that had driven by and saw this hateful display out front. These neighbors included mothers, straight people, businesses owners — and they all asked me if I was OK. They offered to come to the store if I needed them, or if I did not feel safe. I felt so amazing at the kindness, love and support that showed up! I was truly touched that at least 10 people called within 30 minutes to see if “we,” White Rabbit, were “OK” . . . while the angry men out front spewed “Lesbian you are going to Hell!” at me. I simply smiled, knowing that their actions were not very “Christian” and sure he was not agoing to get them to a better place. A mother and her daughter walked into the store next, and the mother looked at me and said, “we have never been in here, but we just wanted to come in and offer you some emotional support.” . . . They were straight, even better! They made a purchase to support the store. Next a man walked into the store saying to me, “I have never been here, and I am not even gay, but I saw this yelling out front from up the street, and I had to come down and make sure all were OK, and support you!” Yes! MORE LOVE! The hate was gone, but the love and support continued. (Q Notes Online – Randi Salvatore at https://goqnotes.com/67266/love-overcomes-hate/)