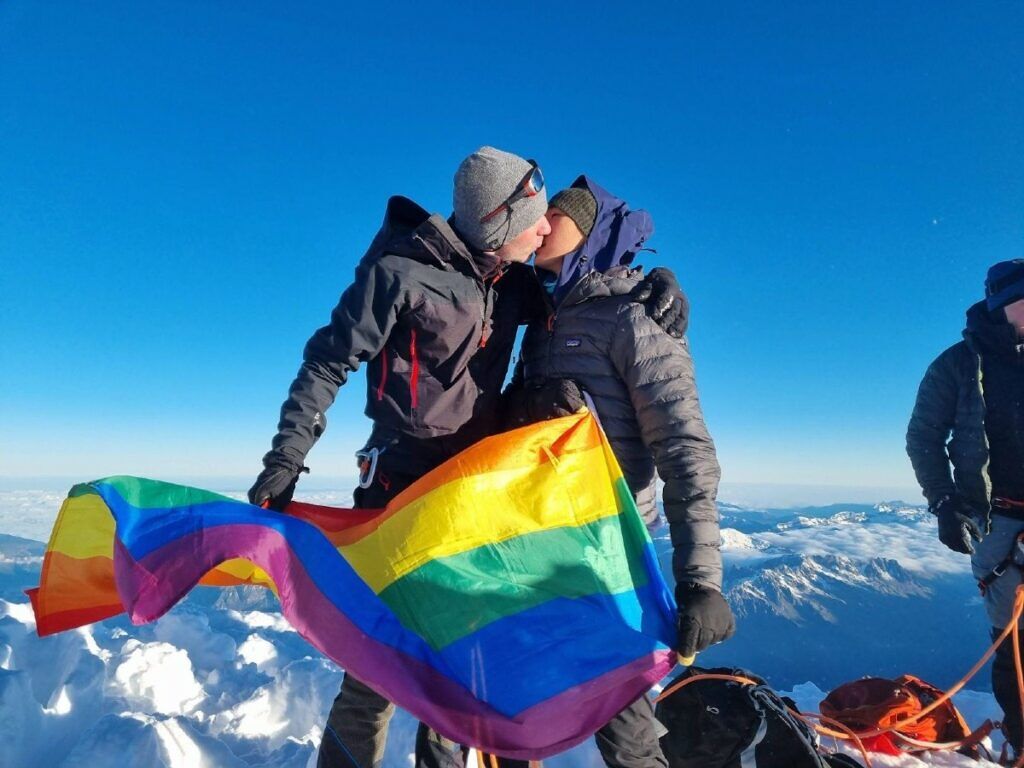 Courmayeur, Italy – David Hudson reports for Queerty that a group of queer mountaineers recently took photos of themselves waving a rainbow flag at the top of Mont Blanc. The mountain is the highest peak in the Alps and Western Europe. The display of LGBTQ pride, which took place September 21, is part of a visibility campaign called Pink Summits. The campaign’s aim is for mountaineers to carry a rainbow flag to the highest mountains of each continent, including Everest, the so-called Seven Summits. Besides caring the flag, the mountaineers document their journey, share their experiences, fundraise for local LGBTQ+ organizations and queer victims of violence, and offer youth mentorship across the globe.

It all began in August 2018, when the Pink Summits team climbed Mount Elbrus, the highest peak in Eastern Europe and Russia. In fact, while trying to cross the state border between Georgia and Russia, the latter’s secret services—the FSB—stopped and interrogated them. Dastan Kasmamytov, the founder of Pink Summits, told GayCities about the scary experience. Authorities detained him for around six hours and then thankfully allowed him and a fellow climber on their way. He and his companions have also climbed Mount Kilimanjaro, the highest point in Africa, and Mount Kosciuszko in Australia. In January 2022 they plan to climb Mount Aconcagua in South America, which is the highest peak on the planet outside of Asia. They also want to tackle Denali in North America next year. This is a long-term campaign as each climb can take months of preparation. The team aims to finish with the climb of Everest in 2025.

Dastan grew up in Kyrgyzstan in Central Asia and has long had a love for the wilderness. The country is notoriously conservative. He says his family made attempts to “cure” his sexuality, taking him to see a magician and various religious leaders. He took up rock climbing because he found peace and empowerment in the rough terrain of the Tien Shan mountains. Dastan came out publicly during a press conference about a Human Rights Watch report on police violence against gay and bisexual men in Kyrgyzstan. He subsequently received death threats, and the backlash forced him to move. Carrying on his love of adventure, he ended up cycling from Kyrgyzstan to Berlin, Germany—a distance of over 3,500 miles. He continued his studies in Germany and Norway. Dastan’s epic bike ride inspired him to seek new challenges, and the Pink Summits campaign was born. If you want to help support Dastan and the wider Pink Summits team, they’ve set up a GoFundMe and are welcoming donations. (Queerty – David Hudson at https://www.gaycities.com/outthere/56431/gay-mountaineers-take-rainbow-flag-worlds-highest-peaks/)