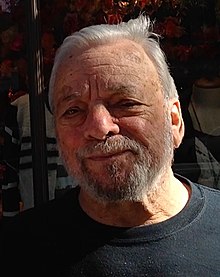 Roxbury, CN – The news on November 26 that Stephen Sondheim had died was sudden and surprising. Although he was 91, Sondheim was not reported to be in ill health and had just spent Thanksgiving with friends. The breadth of Sondheim’s musical oeuvre and concomitant genius will be written about extensively in the coming days and weeks — and for years to come — by music critics, musicologists and academics. I shall leave it to them to deconstruct his genius in those contexts, noting his many awards from Tonys to the Pulitzer Prize to Grammys. But for some of us mere lovers of his music and often dark vision, Sondheim’s singular voice touched us personally. His death is mourned with all the keening depth we would bestow upon a close friend.

It was among [the] albums [of my parents] that I discovered Carol Lawrence and Larry Kert singing the original Broadway cast debut of Sondheim’s and Leonard Bernstein’s “West Side Story.” Like many queer kids, I fell in love with the rarified world of dreams coming true that most musicals presented and which always seemed out of reach for us, for me. Out of reach except in Stephen Sondheim’s musicals, where things were never quite as they seemed and where outsiders were the main characters, not in the background or on the margins. Sondheim’s lyrics that told us “Somewhere, there’s a place for us,” and we could truly believe it because the characters who sang these words were outsiders like us.

Did Sondheim’s own outsider status as a gay man influence his by turns rapturous and defamatory writing about romance and relationships? Sondheim was a gay man who did not come out until he was 40 and did not live with a partner — dramatist Peter Jones — until he was 61. Sondheim married Broadway singer/actor Jeffrey Romley in 2017. Romley, 41, survives him. Sondheim’s own search for the love and acceptance he wrote about again and again eluded him often and long, and it has led the mainstream press to ignore the fact of his gayness and the role it played in his work.

The complicated nature of Sondheim on romance is part of his allure. There are few happy endings in Sondheim. Rather, there are epiphanies and self-awarenesses and even, at times, self-acceptance.

hem. And for all of the immensity of that passion he wrote out for us till his final days, we shall be forever in his debt. (Philadelphia Gay News – Victoria A. Brownworth at https://epgn.com/2021/11/30/stephen-sondheim-a-singular-voice/)