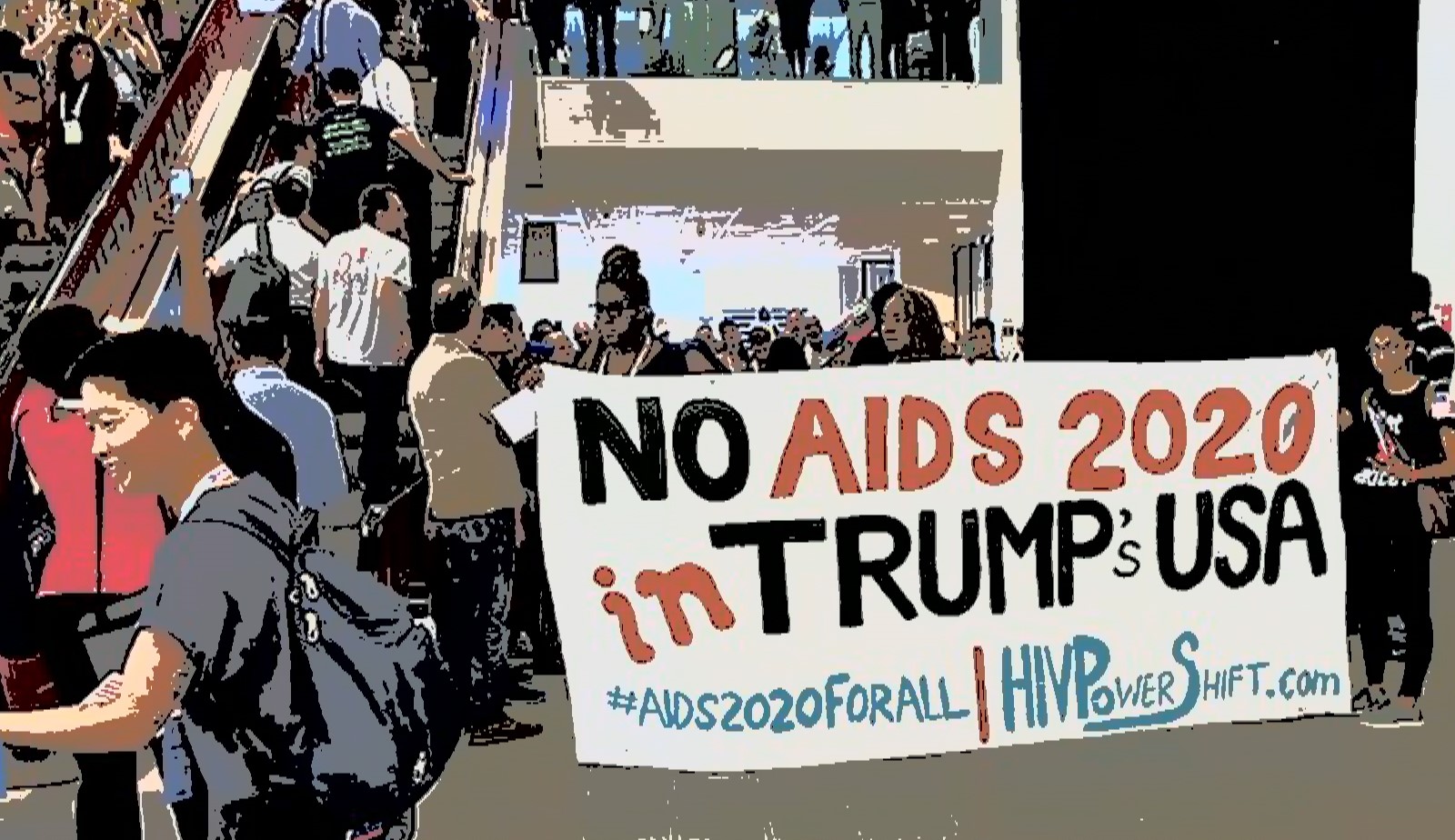 It is every bit as absurd as it sounds. The International AIDS Society (IAS) plans to hold their global AIDS 2020 conference in San Francisco – an insanely expensive and privileged city located in a country that has become dangerously inhospitable to the very populations the IAS claims to serve.

Thank goodness for a growing army of activists and organizations (under the banner of #AIDS2020forAll) who are demanding that the IAS remove the conference from the US. Maybe this all looks like inside baseball to you, a ruckus between factions, but I am here to tell you that this has everything to do with our value as people living with HIV (and the dismissal of our voice by elitists who believe they know what is best for us).

The bottom line is this: AIDS 2020 must be moved out of the US and this demand is coming directly from people living with HIV and our allies. There is plenty of time and historical precedence to do it. Let’s break down the many reasons why.

Trump USA is an obscene and dangerous place for AIDS 2020

International political leaders may be forced to stand with Donald J. Trump at photo ops, trying hard to keep a straight face while appearing beside a man who is systematically stripping basic human rights away from immigrants, asylum- seekers, LGBT people, and people with HIV. But that doesn’t mean we have to play along.

We are HIV activists. We stand up to the powerful. We tell the truth. If we are unwilling to take a stand against the Trump administration and its descent into fascism, who the hell will?

The White House Office of National AIDS Policy has closed its doors and the Presidential HIV/AIDS Advisory Council has been disbanded. LGBT issues have been wiped from governmental web pages. Transgender people have had their military service questioned, their access to healthcare imperiled, and their very lives threatened. The “war on drugs” – and people with addiction – has cranked up again. Immigrants face deportation, incarceration, and separation from the own children and families. White nationalists are marching (and murdering people) in the streets. You know the whole nauseating story.

The US of A does not deserve to host an international gathering of people who consider themselves compassionate toward the disenfranchised. And if attendees are not white and straight and cisgender (and don’t keep their mouth shut about their progressive views) we cannot guarantee their safety in our country.

The IAC and its new head, Kevin Osborne – the first IAS director who is openly living with HIV, in a sadly ironic twist – consider themselves sensitive to all of this. Let’s examine that.

AIDS 2020 only welcomes the right people.

The IAS was alarmed and offended by the ban against HIV positive travelers that once existed in the US. They actually moved their AIDS1992 conference out of Boston and to Amsterdam in protest (re-organized “in just one year,” the IAS web site humble brags). When the ban was lifted the conference returned to the US, in Washington, DC, in 2012.

Except this is not the whole story. Travel bans into the US are still in place for sex workers and people with drug addiction and crime histories – key populations that participate vigorously in the conference. The previous travel ban against people with HIV had real consequences for many scientists and researchers, and for those among the global elite. The IAS fought for them. When it comes to the remaining travel bans for these other key populations, however, the IAS has suddenly become circumspect, arguing that not that many people are affected.

So, now we know where the IAS draws the line. As long as the right people can get to AIDS 2020, they’re good.

Interestingly, the IAS points to the AIDS2000 conference in Durban, South Africa, as an example of the benefits of holding the conference in hostile territory (the South African president at the time was an AIDS denialist, questioning whether HIV caused AIDS). But the comparison between Durban in 2000 and San Francisco in 2020 end with having a wacko president in common.

Grassroots community advocates in Africa wanted the AIDS2000 conference to come to them. The Treatment Access Campaign, a community coalition in South Africa, was heavily involved with the conference planning and used it to advocate for real change.

In sharp contrast, every single coalition of people living with HIV in the US has signed a letter demanding that AIDS 2020 be moved out of this country. We simply do not want it here. Dozens of international organizations signed on, too. Oh, and you’ll never guess who has joined that list: The Treatment Access Campaign from South Africa.

This becomes, then, a gauge of whether or not the IAS actually listens to and values the positions of people living with and most affected by HIV. Thus far, not so much.

Who is for, against, or staying silent about AIDS 2020 in San Francisco speaks volumes.

Has whatever organization you support taken a stand on this issue, and what is it? The answer may well depend on all the usual things: money, status, and who is valued.

Take a look at the list of organizations that have signed on to the “No AIDS 2020 in Trump’s America” list organized by HIV Power Shift. It is a stunning collection of networks of people living with HIV, affected communities of various sorts, and some bold service organizations that still remember what it means to stick your neck out.

I’ll resist the urge to name some of them now. I’m glad some big marquee names have joined. I am even more inspired by all the grassroots groups that represent women and people of color and transgender people and sex workers. HIV activism has always been driven by those with the most to lose. I do wish the IAS would learn that lesson, at long last.

There’s an organization I don’t mind naming, though, and that is the San Francisco AIDS Foundation (SFAF), which enthusiastically supports AIDS 2020 coming to their city. SFAF does a lot of amazing work. They also appear to have made the calculation that showcasing their many successes on a world stage is worth turning their backs on populations around the world that are not unlike those they serve. Yes, most organizations born out of community activism like SFAF traded their legacies years ago for pharmacy services and Medicaid dollars, but still. It’s disheartening. The SFAF press release heralding AIDS 2020 coming to town (and their starring role in it) is so clueless about objections to the conference location that the entire statement is as worthless as it is maddening.

Meanwhile, several national HIV advocacy organizations have yet to weigh in. You know who you are. We all look forward to you finding your voice on this issue. The deadline to join the sign-on list is October 3rd, after which I think it is fair to start naming names.

Do not get me started about the inclusion of Oakland in AIDS 2020.

In a transparent attempt to avoid objections to AIDS 2020 being held in the most expensive city in the country, the city of Oakland has been included in the conference planning, as if attendees can just take a few steps and shazam! they’re in Oakland.

What a cynical ploy to exploit the struggling communities of Oakland. With a few notable exceptions, most organizations in San Francisco and Oakland have been silent or have offered muted support for the conference, and insiders suggest that these agencies simply don’t have the luxury of bucking global forces – or of crossing the San Francisco AIDS Foundation, the big kid on the block nobody wants to piss off.

Let’s move AIDS 2020 and get on with the real work of HIV advocacy.

The IAS will argue many things, such as the complexity of moving the conference (they moved it from Boston in less than a year), how no suitable, more economically depressed cities vied to host it (help them), or how they don’t know where else it could possibly go (Mexico, Morocco, South Africa, Cambodia, Thailand, Vietnam, Panama, Ecuador).

We have work to do as advocates, most especially in the months leading up to the 2020 elections. The politics of HIV demand the full attention of every advocate in this country during that critical time. The IAS clearly isn’t as scared shitless as those of us actually living in the US.

Instead, the posture of the IAS thus far has been to treat the concerns of people with HIV and our allies as a problem to be managed. Not for a moment have they publicly paused to consider moving the conference in light of our unanimous opposition. Instead, they muscle past us as they continue plans to mount a conference that is alienating and polarizing and exclusionary and privileged and tragically expensive.

The cost of which may be far more than they care to imagine.