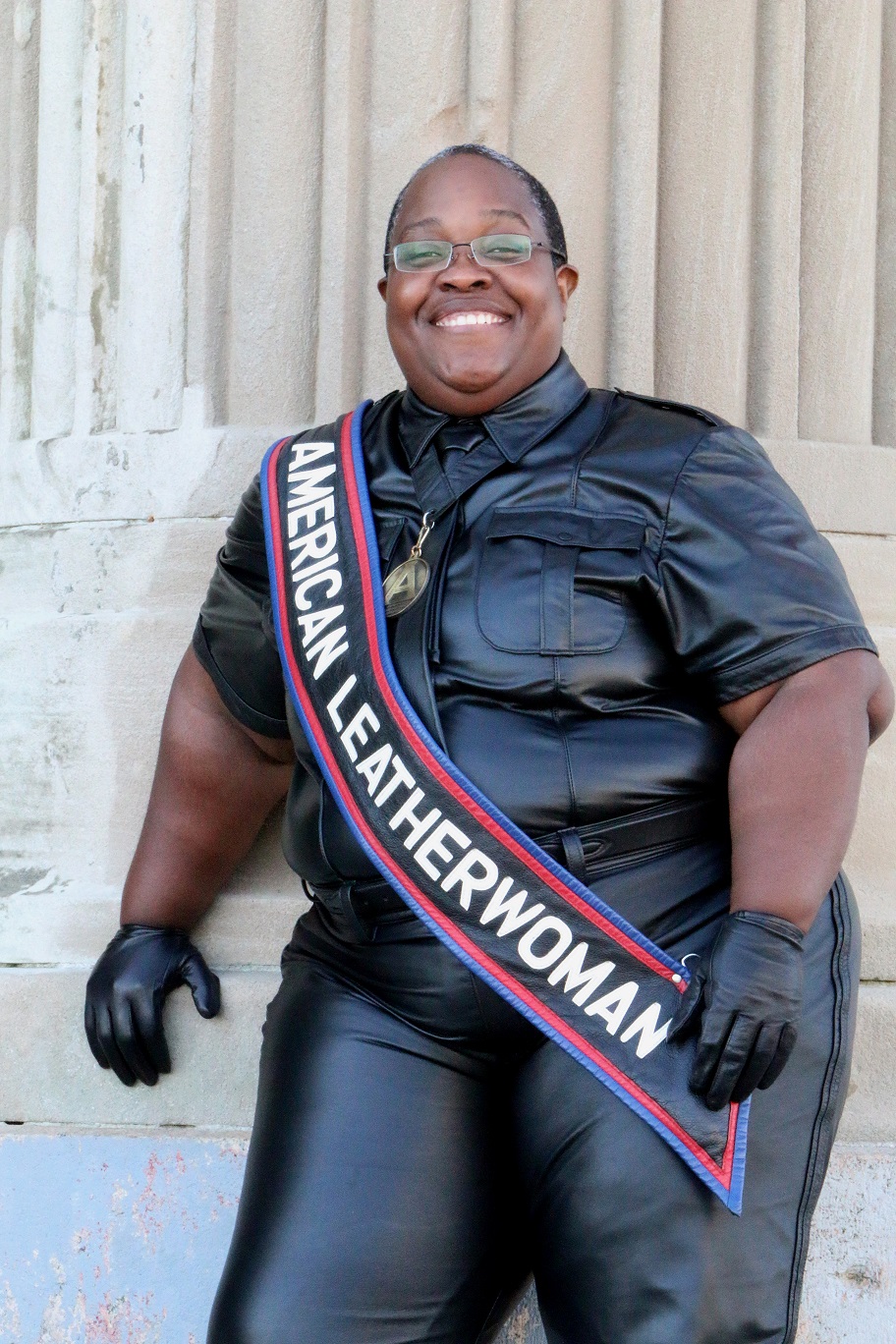 The last time I saw American Leatherwoman 2017 Jackie Thompson was in January of 2020. It was during the IML press conference that is held on the Saturday morning of Mid-Atlantic Leather Weekend in DC. She had just been announced as a judge for the International Mr. Bootblack 2020 Contest which is held over the Memorial Day weekend in Chicago as part of International Mr. Leather Weekend. She beamed as the audience cheered loudly that another hardworking local leather person would be a judge at the world’s largest leather event. Unfortunately, IML did not happen in May 2020 and IML 2021 has been moved to November 11th – 14th. Jackie hopes to still be at the judges’ table. Right now, everything is pending. 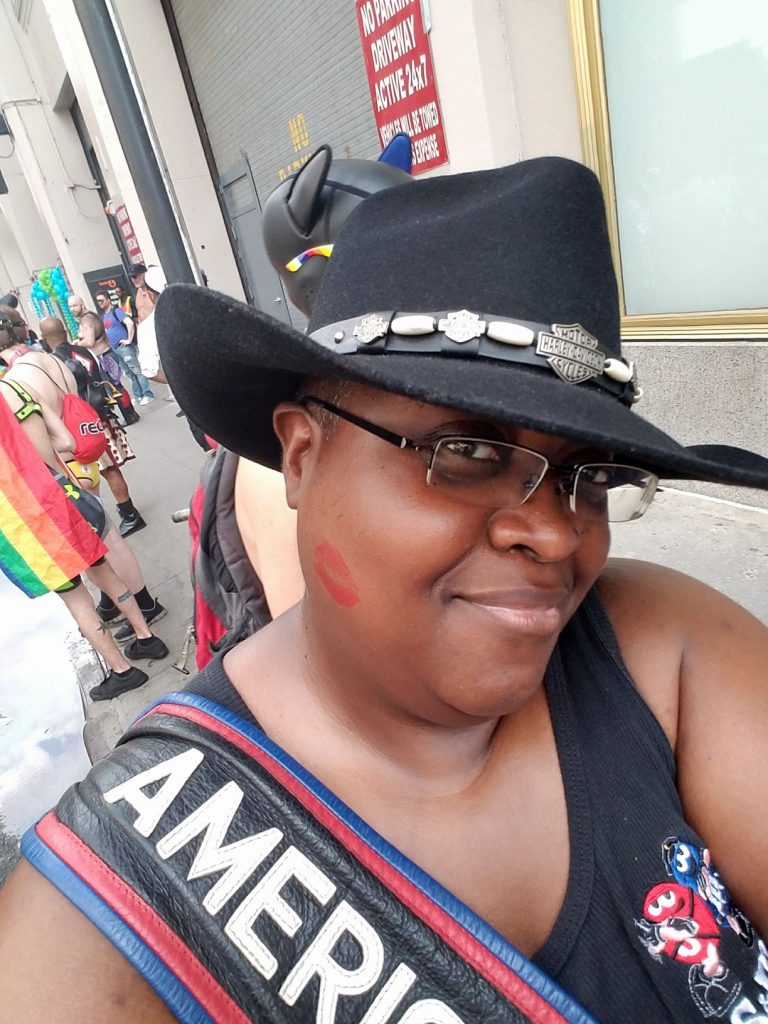 We have been friends for years and I was able to see Jackie again recently via FaceTime. It was not the same as seeing her in person, but it gave us a chance to catch up. So much has happen since MAL 2020. For most people the past year has been sad, but Jackie was able to find happiness with a small socially distanced wedding in July in the backyard of American Leatherboy 1997 Max Steiner that was broadcast via zoom. The wedding was not easy to pull off since Jackie’s wife lived in Canada and had to deal with a closed border. Although she couldn’t drive across the US / Canadian border to join Jackie in Maryland, she was able to fly in on July 4th and the couple spent quarantine planning their wedding. 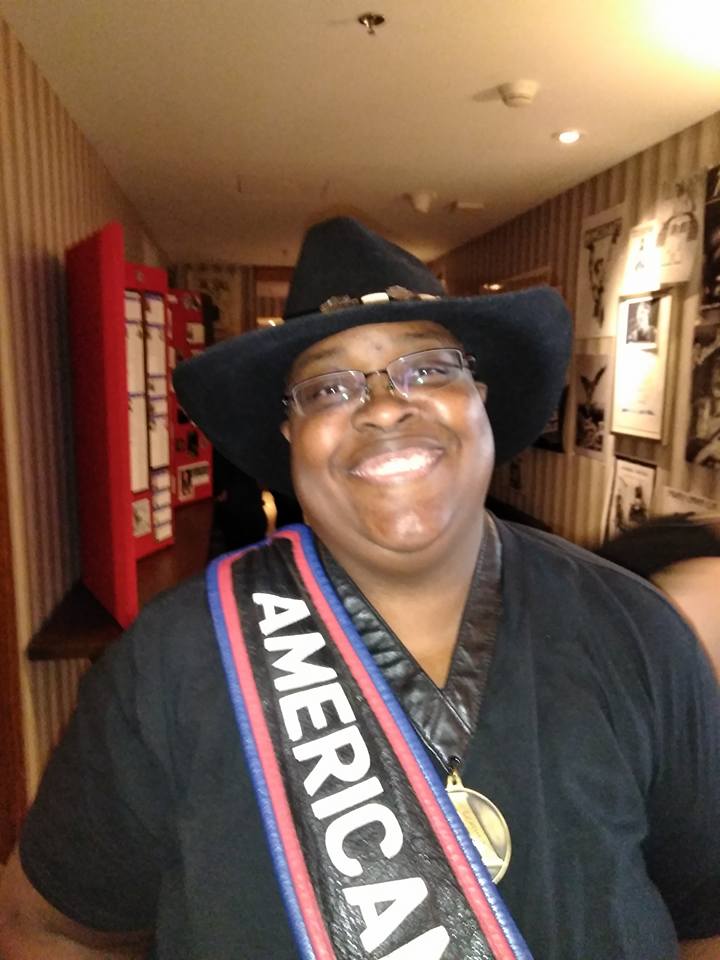 Jackie was born in Maryland in the rural community of Poolesville, that has now become a bedroom community for Washington, DC. She laughed as she explained that when she was growing up, “Poolesville had dirt roads and didn’t even have a traffic light. They did, however, have a stop sign! To get to her house you made a turn at the cows.”  It is a historic Black community that she learned had once been part of a plantation. Years later when she visited DC’s National Museum of African History and Culture, she saw pictures of her neighborhood.

Like most of us growing up, she had crushes on same-sex teachers. Once while traveling down those dirt roads, Jackie’s mother came right out and asked if she was gay. When she answered yes, there was not further discussion. When she grew older and was going down that same dirt road, her mother asked her if she was bi-sexual. She explained that she has both a strong male energy and a female energy and uses both pronouns “he” and “she.”  Jackie proudly added that her mother was able to attend the wedding to her wife in person and last Christmas gave them matching pajamas, a family tradition, and a three-foot rainbow Christmas tree. Jackie is thankful that her mother is so accepting and understands that many in the LGBTQ+ community are not as fortunate.

Jackie’s discovery of the leather community came by way of the International Gay Rodeo Association when she attended a gay rodeo at the nearby fairgrounds. As she sat there, she thought, “I can do that!” Although she tried and failed, she enjoyed the rodeo family that she met and became involved with the Atlantic States Gay Rodeo Association where she created brochures, sold sponsorships, was in charge of titleholders, and even served as the organization’s vice president. When she attended a “Dyke Night” at the DC Eagle bar, she discovered the leather community. Disappointed that some of the area’s leather clubs did not seem to have female members or people of color, she flirted with the idea of starting her own leather club, until she met the Highwaymen TNT. She joined in 2007 and brought the organizational skills she learned at ASGRA to the leather community.

By 2009 Jackie was ready to step up and do even more. She ran for Mid-Atlantic Leather Woman and finished first runner-up. “I bombed on my speech,” she explained. “I didn’t know what I wanted to say. My speech didn’t flow well.”  After much reflection, she ran for another title a month later, Ms. Capital Pride Leather 2009 and took home the sash. She had found her voice. She addressed her speech to “the people standing alone in the back of the room. Those who don’t know anyone and aren’t sure if they belong there.” She wanted to welcome them to the leather community. Although Ms. Capital Pride Leather was designed to be “just a DC Pride title,” she took it everywhere. Where her sash husband Matt Bamford took his Mr. Capital Pride Leather 2009 title to the stage of Mr. Mid-Atlantic Leather 2010, he won. Jackie put her title on the back burner and felt like she was Mrs. Mid-Atlantic Leather 2010 and worked with Matt. Matt, she explained, could be outspoken and she began to call herself the fire extinguisher, always putting out fires and reining him back in. They made a good team.

Years later when a relationship ended, she felt she was ready to step up again and run for a bigger leather title herself. She described it as her “year of yes.” Her friend Max asked her to be in a cowboy themed striptease skit at the International Ms. Leather Contest, and she said, “Yes!” When leather icon Vern Stewart was having heath issues, she was asked it she would help care for him and again she said yes. She gained lots of knowledge from Vern about leather history and running for a leather title. Jackie added that the older generation of the leather community has so much to offer and it is important that we learn from them. With the rising cost of attending leather events, perhaps some of these older leather leaders, many who live on fixed incomes, could be given a discount so they could attend and share their wisdom. Vern gave Jackie a video of an old American Brotherhood Leather Contest. She had it digitized and when she went to Chicago to compete for American Leatherwoman 2017 along with Leather Man of Color 2011 and fellow Maryland resident Rod McCoy, they had lunch together and before the contest brought all the contestants together to watch the video. They even struck poses from the video later when they hit the ABW stage. Rod would bring home the title of American Leatherman 2017 and Jackie was proud to be sashed American Leatherwoman 2017. Again, she took her sash everywhere, even wearing it on Broadway when she took her godson to see “Wicked.”

With the pandemic putting a stop to traveling, I find myself living vicariously and enjoy hearing about the fun trips that others took in those pre-COVID times. Jackie had wonderful stories about Folsom Europe 2019 in Germany. She also spoke about the great honor of being selected by contest producer Vern Stewart to judge the Mr. Eagle NYC 2020 Contest, a contest that usually does not have a woman as a judge. Unfortunately, Vern had passed before the contest was held, but she knew that having Vern ask her to judge was his way of saying: “I see you and I respected you.” She is also very proud to have had the opportunity to march with a group of leather titleholders in World Pride 2019 in New York.

Jackie has done so much for the leather community. From stating the popular Capital Bus Crawl, a charity event that takes people on the ultimate bar hop from DC to Baltimore, Philadelphia, and sometimes even New York to starting “Kink” a play party for women and trans people at SIGMA. She has come a long way from those dirt roads and her journey is far from over. Don’t underestimate the Black woman in the cowboy hat. She is working hard to make sure that no one feels alone in the back of the room.