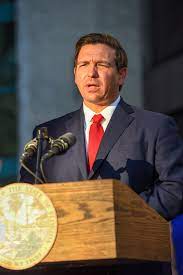 Tallahassee, FL – In yet another spate of anti-LGBTQ activity in a Republican-controlled southern state, Florida governor Ron DeSantis has upped his efforts with a crazed crusade on the second day of Pride Month by vetoing all funding for LGBTQ programs from the state budget. Canceled funding includes money earmarked for mental health programming to support survivors of the Pulse Massacre, to house homeless LGBTQ children, and for Orlando’s LGBTQ Community Center. After signing the Transgender Youth Sports Ban into law June 1, Gov. DeSantis has now turned his attention to stripping funding for mental health support from survivors of the Pulse Massacre just days before the five-year remembrance ceremony. The 2016 mass shooting was one of the worst in United States history, and targeted Central Florida’s LGBTQ and Latin communities, claiming the lives of 49 people.

“Let’s be clear about what this is: Gov. DeSantis has declared war on Florida’s LGBTQ community.” said Brandon Wolf, media relations manager for Equality Florida and survivor of the Pulse Massacre. “Before the 2019 Remembrance Ceremony, Governor DeSantis stood on hallowed ground, steps from where I escaped the building in 2016, and promised me that he would always support those of us impacted by the Pulse nightclub shooting. Today, almost two years later to date, he vetoed mental health services for us.

“I am disappointed … DeSantis has vetoed funding for the LGBTQ community, specifically those affected by the Pulse tragedy.” said Dr. George A. Wallace, Executive Director of the LGBT+ Center Orlando. “Some of Central Florida’s most vulnerable citizens rely on The Center Orlando to provide lifesaving services, such as case management, navigation, and critical mental health counseling. The [Center Orlando] directly serves those impacted by the 2016 Pulse tragedy. We now must find funding [elsewhere] to continue serving Orlando’s LGBTQ community at the same level as we had planned for the upcoming fiscal year. Yesterday marked the first day of Pride Month and … DeSantis has again proved he is one of the most homophobic and transphobic governors in the United States.” In a year of a record budget surplus of 6.6 billion dollars because of the American Rescue Plan, DeSantis’ cruel budget also targets homeless LGBTQ youth. “This money would have helped LGBTQ+ youth facing homelessness, bullying, isolation from their families, physical and sexual abuse, and drug abuse.” said Heather Wilkie, Executive Director of the Zebra Coalition, a network of organizations that provide direct services to LGBTQ+ youth ages 13 – 24. (Q N0tes Online – Michael Womack at https://goqnotes.com/70494/more-anti-lgbtq-activity-from-the-gop-as-florida-governor-cuts-all-gay-funding/)