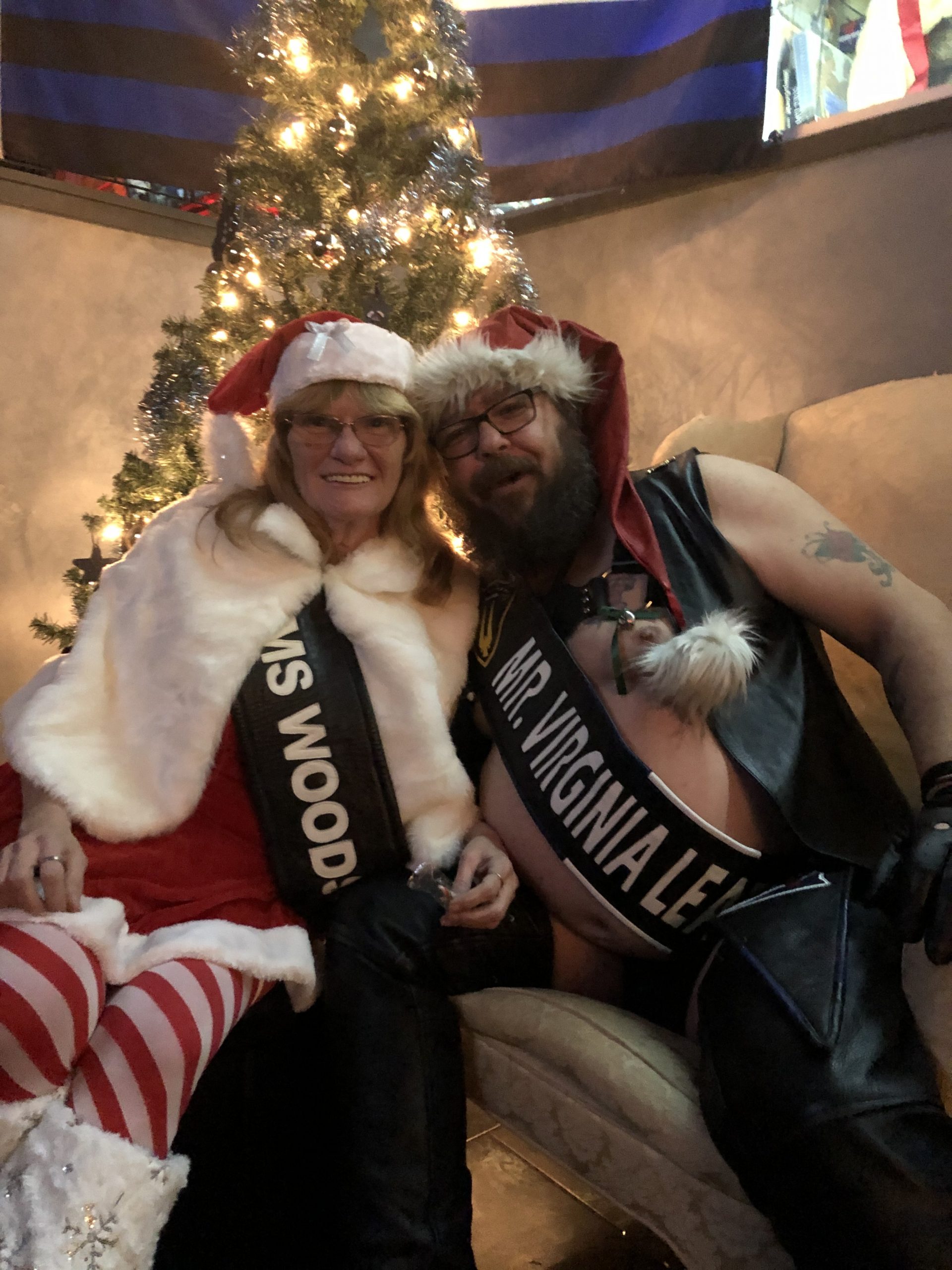 I know that I am not the only one who feels this way, but the holiday season can be a rollercoaster of emotions for me. Sometimes “the most wonderful time of the year” makes me sad thinking about the friends and family who are no longer with us or my fantasy dreams of a perfect holiday season that doesn’t measure up to reality. Although Sir Steve and I have been together since 2001, we have never been together during the holiday season. For many years he was working out of the country and now that he is retired, he flees to Florida to escape the winter chill. It is at these times that I am most thankful for the Mid-Atlantic leather community and those three local holiday traditions that never disappoint. Thanks to these events I am once again able to find that holiday joy.

In Baltimore the first Thursday of December brings the annual lighting of the Washington Monument in Mount Vernon Place. As it has for 48 years, this beautiful Baltimore landmark that started construction in 1815 becomes the city’s largest Christmas tree. I start the evening with happy hour with my friends at Leon’s. (I like to be lit before the monument.) It is only a short walk from the bar to the festivities. Unlike the tree lighting in Rockefeller Center, where they just turn on the tree and that is it, Baltimore puts on a show with fireworks and lights. There is also lots of music and tents representing local restaurants filled with food and drink. It is a beautiful Baltimore holiday event that puts me in the holiday mood. Plus, I always seem to make new friends. This year I met two bears who recently moved to Baltimore from Atlanta. I invited them to my second holiday event, and they were there.

For 30 years the first Saturday of December brings the ShipMates’ annual Daddy Christmas. Started at the Galley Bar (where the ShipMates leather club was founded in 1974) this annual fundraiser has been held at various locations throughout Baltimore and has raised money for Chase Brexton, the Baltimore Transgender Alliance, Healthcare for the Homeless, the Don Miller House, and many other wonderful charities in the area. This year’s Daddy Christmas was held at the Baltimore Eagle and benefited Chana, an organization that helps victims of violence and abuse (Chanabaltimore.org). The ShipMates had a wonderful 2019 and added ten new members who brought new energy to Maryland’s first leather club. Also helping make this year’s Daddy Christmas a big success were Mr. Virginia Leather 2020 Prince Tristian and Ms. Woods Leather 2020 Donna Marie who filled in for Mr. and Mrs. Santa Clause. It was also wonderful to see all my friends from Leon’s, including the bartender, show up for Daddy Christmas. There was a silent auction, $2 drafts, Jell-O shots, and one lucky person won a large wagon of cheer for just a dollar! It was a really fun night.

The second Saturday of December brings the biggest holiday event in Baltimore’s LGBT community, the annual 12 Days of Christmas variety show. This event started by Rik Newton-Treadway was originally planned as a one-time fundraiser during Rik’s title year as Maryland Mr. Drummer 1999. As he opened the show Rik joked that a baby born during the time of the first 12 Days show is now legal to “do stuff in all 50 states!” The 21st 12 Days of Christmas benefited AIDS Action Baltimore, B & Dee’s Baltimore Love, Mid-Atlantic Deaf Interpreter Fund, and Trans Lifeline. At a time when so many people in the community stay home on their computers and phones, what can you say about Rik and his organization Hooker & Boys who have entertained the community for 21 years while raising thousands of dollars for local charities? Talk about the true spirit of the holiday season! As the show began, I was deeply honored to be presented with the Millard Barnes Murphy Community Service Award. During intermission I had a wonderful conversation with leather icon and historian Vi Johnson regarding mentors. She reminded me that she knew me long before I started writing this column in 2005. She said that people in the leather community should be asked, “Who is your family?” Those who do wonderful things in the leather community do so because they were raised well. I have always been grateful that I had good mentors, such as Rik to inspire me to keep going. As Rik always says, “It is what we do.”

The 12 Days of Christmas show has always brought the leather community and drag community together – an idea that was revolutionary in 1999. Once again, this year’s show was filled with all kinds of titleholders. I cannot begin to tell you about each one. Emceed by Shawnna Alexander, Sarha Shauback, and David Allen, the sold-out room was treated to everything from International Mr. Leather 2019 Jack Thompson working a candy cane and some whipped cream to the tune of “Pour Some Sugar on Me” to International Ms. Leather 2016 Lascivious Jane performing “Be Good to Momma.” The Mid-Atlantic ONYX Pearls had the crowd going wild with their energetic dance to “We are Family” and the FIST leather club handed out lollypops as they performed to the Jonas Brothers’ hit “Sucker.” Some performers sang live such as Mr. DC Eagle 2016 Grey Owl ONYX and Ms. New Jersey Leather 2016 Christy Lee. Three of the afternoon’s performers had appeared in the show every year: Shawnna Alexander, Rik (who continued the tradition of closing the show with his amazing Cher impersonation), and Mr. Baltimore Eagle 1997 Rich Geisendaffer (“Rosie”). Chasity Vain was a wonderful Dolly Parton, Brie Devine really worked the room, Jay Mirage Cruz gave it his all, and Marshall Roberts almost showed it all in his version of “Santa Baby” / “All I Want for Christmas is You.” Those are just a few of the performers this year. There was a large silent auction, photos with Santa and Mrs. Claus (FIST member Butch Lee and Mid-Atlantic Leather Woman 2020 Treasure), cakes and cherry bombs by Belton Moore, and a balls-to-boots raffle sold by Mr. & Ms. New Jersey Leather 2020, Bobby Basset and Gretchen Bennet. It was a fantastic afternoon filled with the spirit of the holidays.

This can be a stressful time of year, but when I attend my three favorite holiday events, I know I can find the joy again. Have a wonderful holiday.