In the movie From Zero to I Love You, writer and director Doug Spearman takes audiences on a rollercoaster ride as the lives of characters Jack Dickinson and Pete Logsdon intertwine.  The LGBTQ film allows audiences to explore what happens when a one-night stand turns into a once-in-a-lifetime love for both characters.  Spearman recently chatted with Baltimore OUTloud regarding his inspiration for the film, what he’s most proud from the work, and his Maryland connection. 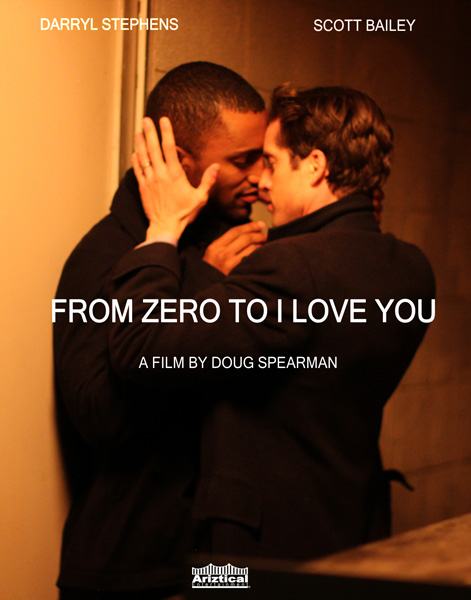 “I have a very emotional, personal attachment to this film,” began Spearman, who grew up in Hyattsville, Maryland. “This is because [the film is] based on good chunk of my life and my relationships.”

As the film opens, Jack (Scott Bailey, Guiding Light, Prayers for Bobby) has what every man would want; a beautiful and successful wife, two smart and pretty daughters, a big house on Philadelphia’s Main Line and a great job in a publishing house. He also has a secret that has been eating him alive for most of his life. Like many men and women, Jack choose the path of ‘normalcy’ to the American Dream rather than face the fact that he’s attracted to men. He tries as hard as he can to be the faithful husband and good father until one night, he can’t do it anymore. Pete (Darryl Stephens, Noah’s Arc, Boy Culture) is just a guy in Philadelphia who happens to have a history of getting involved with married men. His father (Richard Lawson, Poltergeist, All My Children) and his soon-to-be stepmom (Leslie Zemeckis) are on him to find someone who’s actually available and to settle down. A chance encounter at a party leads Jack straight to Pete who will change his life forever and upend everything Jack has built.

“At its heart, From Zero to I Love You is a modern love story about two guys who’ve been told over and over again that society and their families have very clear expectations of them.  Then they meet each other, and those expectations go right out the window. Even though they both try to do the right thing, given where they come from, they find in the end that love has other plans.”

Spearman’s inspiration for telling this story began all the way back in 1991.  “I wrote From Zero to I Love You originally as a novel.  It was just something that came to me.  I knew the whole story, and it started with ‘I love you.’  Literally, that was the first thing that came to me.  And then I ‘saw’ Jack and Pete in my head.  Then I started with the story because all through my twenties, and deep into my thirties, I would find myself in relationships with men who were partnered. Sometimes they were married to women. I’d meet a guy and it would turn out I would start something, fall in love, and then found out he had a wife. And then, sometimes, I would find out they had a boyfriend, or they would end up going back with their ex.  This was happening with such regularity that it felt like a curse.”

While writing, Spearman actually told the story from a different perspective.  “I wanted to see why this situation kept happening to me over and over again, so I wrote it from Jack’s perspective – the married guy.  I wanted to see if I could understand his side.  In doing so, what I really did was start to understand myself a lot better.”  In 1998, Spearman decided to see if he could write a screenplay, and it was easier for him to adapt something he’d already written into that format.  “When you go from a book that was 504 pages long to a screenplay that was 110 pages, you find that you have many edits. Believe it or not, this screenplay had 48 different drafts written over the course of 20 years.”

“I’m not the kind of writer that believes I create all this stuff,” explained Spearman, “but I believe that I’m the radio that’s tuned in when the story wants to be told.”  Spearman explained that many of the scenes began to resonate with him off the page.  “There’s this scene between the characters of Pamela and Ron, who are based off my sister-in-law and my father/brother, respectively. In the scene they say, ‘What’s going on with you? Why can’t you settle down?’ and then they both yelled that Pete had a fear of commitment.  At that point I stopped typing and I thought, ‘Do I have a fear of commitment?’  While writing this story, and having these characters speak to me while I’m trying to type, I definitely learned a lot.  The piece is definitely based on me, and Jack is based on several different guys.  Everybody in this film is based on somebody.”

The film was phenomenally casted, showcasing the acting prowess of many of the film’s performers, especially actors Scott Bailey and Darryl Stephens.  “I knew Darryl specifically because we were friends and then casted together in Noah’s Arc. In my very first movie, Hot Guys With Guns, Darryl played the villain.  So, when it came time to do my second move, From Zero to I Love You, Darryl was an easy pick.  Even though our personalities are very different, and the way we walk is different, I knew that Darryl had the emotional depth and just layers and layers of stuff that he could bring to this film.”

It was while scrolling through IMDB (Internet Movie Database) that Spearman came across Scott Bailey’s resume reel.  “I reached out to [Scott] and told him that I had this idea for a story.  We met for coffee at Jerry’s Deli on Ventura Boulevard on a Sunday.  He walked in, handsome as hell, and he sat down as I pitched the story to him. He agreed to read the script.  He then wrote me this very personal, deep letter telling me how much he loved the character, and why he though it was important that he played this character for all the ‘Jacks’ in the world.”

After bringing Bailey and Stephens together, Spearman saw that their chemistry was immediate.  “You know, it’s a very dicey thing when you have a story with a guy who’s having an affair on a woman with children.” Spearman went on to explain that it was while filming one of the scenes in the movie that he knew he was in good shape with balancing that issue. “It was probably one of my favorite scenes in the movie, where Pete and Jack are talking on Pete’s front doorstep.  They’re both talking about books, and it’s the sexiest conversation you’ll ever see about literature in a movie.”  Spearman went on to explain that there were three women standing around him behind the scenes.  “They kept saying, ‘Yeah, no I completely get it.’  They saw that it was so apparent that these two characters were so in love that you couldn’t fight it.  So it was then I knew we were in good shape.”

Spearman also added, “Here’s the thing about hiring great actors – you get out of their way and let them show you who the characters are.  I gave them as little direction as I possibly could unless there was something I wanted to pull out or tease out some more.”

Overall, Spearman is very proud at the end result of this film.  “The film is very personal for me.  It’s so personal that some places of the film are almost exact scenes from my life.”  Spearman added that the movie owes a great debt to his mother.  “This film doesn’t necessarily fit the modern narrative of what a love story is because I’m kind of an old-fashioned romantic.  My mom was significantly older when she had me – she was in her 40’s.  I remember a time when old moves were on the television all the time and she would keep me home from school to insist I watch a great old movie.  She loved these great, old love stories from the 1940’s – what used to be called women’s pictures.  A lot of those old movies that my mother made me watch really informed how I shot From Zero to I Love You.  A lot of times in a gay film it is usually just two guys in one location, with no outside influences for a short span of time.  I really wanted something that had scope, and in order to have scope we had to show that our decisions don’t just affect us or the person in front of us. They sometimes affect 10-12 people.  And we were able to really show that with this amazing cast.”