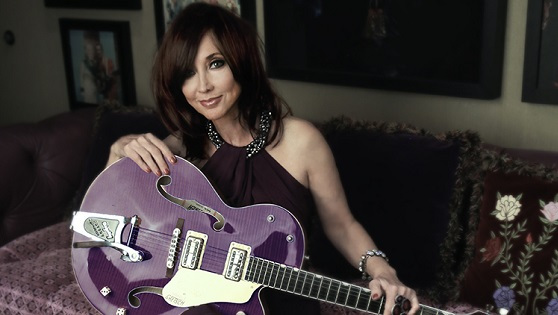 Pam Tillis is country music royalty. The daughter of country music legend Mel Tillis, Pam has had her own lengthy career as a singer/songwriter with hits including “Maybe It Was Memphis”, “Cleopatra, Queen of Denial”, “Spilled Perfume” and, of course, “Mi Vida Loca (My Crazy Life)”. Looking for a Feeling (Stellar Cat), Pam’s 11th studio album and first solo album in more than a dozen years, is the kind of comeback we’ve been waiting for. A compelling combination of modern and traditional country tunes, featuring outstanding originals including the title track, “Burning Star”, “Karma” and “Last Summer’s Wine”, as well as knockout covers including “Dolly 1969” and “Dark Turn of Mind”. Pam was kind enough to take a break from some doing therapeutic gardening in the middle of the COVID-19 pandemic to answer a few questions.

Gregg Shapiro: You co-wrote six of the 12 songs on your new album Looking For a Feeling (Stellar Cat), including “Karma”, “Burning Star” and “Last Summer’s Wine”. What qualities do you look for in a songwriting collaborator?

Pam Tillis: I think freshness. It helps if somebody knows how to craft things, but they don’t have to. If somebody brings great ideas to the table, that’s everything.

GS: When it comes to the cover tunes on the album, including Gillian Welch and David Rawlings’ “Dark Turn of Mind” and Matraca Berg’s “Demolition Angel”, what can you tell me about your song selection process?

PT: It’s somewhat random [laughs]. If something grabs me. It’s just like any kind of art, it’s all subjective. A song that might grab you the one day, might not the next. In the case of those two songs, they came to me at two different times. But they fit the themes of the album. I had “Demolition Angel” for a long time. If you cover a song, I’ve always said it has to feel like it could have come out of your diary.

GS: When you were putting together the theme, the concept for the album, what was the first inspiration for the theme?

PT: Every time somebody asks me about it, I’m also looking at it and trying to analyze it from a different perspective. It’s always something new coming up for me and I realize things about the album that I couldn’t see when I was in the middle of it. I don’t know where this comes from, but there’s some part of me that struggles with the idea of needing to do things perfectly. I’m not saying that I’m Type A, it’s just a part of me. But it rears its head at the most inconvenient times. I think perfection is so overrated. I feel like there is a theme on the record of imperfection. That’s why I like “Demolition Angel”. That song’s about creative destruction. That’s why I like “Dark Turn of Mind”. Especially in this era of social media, a lot of people are trying to present this façade. I’m going, “What if I don’t have it together [laughs?” Are you going to love me then?

GS: You have to take people warts and all!

PT: Yes, especially somebody who’s been in the public eye a long time. I love the book Trick Mirror by Jia Tolentino. It was so fantastic! She encapsulated some ideas that were free floating around in my head. She talked about how the public or culture likes to tear down strong women and then build them up and then tear them down and maybe redeem them. It’s like you’re a yo-yo; there’s a certain weariness with that. That’s why I put in “Looking for a Feeling” and “Better Friends”, with all of these spiritually adrift people. “Burning Star” talks about it’s a trick bag because there is an element of radical acceptance of the human condition and all of our imperfections.

GS: One of my favorite cover tunes on the album is your rendition of Bob Regan’s “Dolly 1969”. What was it about that song that appealed to you?

PT: I’m a sucker for imagery. I love songs that are mini-movies. It (the lyric) comes from a real picture taken by Jim McGuire, which I found out after cutting the song. I’ve always cited Dolly as one of my biggest she-roes. I’ve traveled a lot of that road. It’s funny, but I’m more of a character. I’m traveling back in time to the young me, that wanted to get on board with Dolly and learn from her. A little bit of time travel there.

GS: I also love when a singer speaks during a song, that narration.

PT: That’s a classic country tradition and I’ve always loved it. I’m one of those people who has never particularly loved my speaking voice; I’m glad I can sing. But you get to act. Any text, when there’s no melody, you can read it 100 ways. I spent a long time trying to capture the nuance of speaking that.

GS: It really comes across. Talking about Dolly reminded me about your being a judge on RuPaul’s Drag Race in 2012. What was that experience like for you?

PT: It was really kind of surreal. Especially when the drag queens sang “Mi Vida Loca”. That song has taken me some really interesting places. RuPaul is a beautiful person, inside and out. He’s just so brilliant. And tall [laughs]. He said a funny thing to me, he said, “If you know how much I loved your music, you’d be afraid of me” [laughs].

GS: That’s kind of the ultimate compliment! Your first album was released almost 30 years ago, and in that time the country music world has seen the rise and fall and rise of the Dixie Chicks, as well as out country artists such as Brandy Clark, Ty Herndon, Lil Nas X and Brandi Carlie. Being a country music veteran, what do you think about the evolution taking place in Nashville?

PT: God, it’s slow [laughs]. Really slow. Welcome to the party, everybody! I recently participated in a documentary, Invisible: Gay Women in Southern Music, about the untold story of that in country music. Nashville wouldn’t be the same without that talent. You want to say, “Let’s just hurry up and get to a time when it’s not even a topic. The same thing with race. I’m glad country music is getting more open. That really is wonderful, but it’s just taken a long time. Hate and racism and sexism and ageism – none of that is going to go away, but you can tip the scale and things can be nicer, and they are nicer than they have been.

GS: I recently interviewed Rosanne Cash and a few years ago I interviewed your frequent collaborator Lorrie Morgan. All three of you are country music legacies and it made me wonder if there is any kind of club where the offspring of country music legends get together to share stories and give each other support when needed.

PT: Not officially. It’s a loose confederacy. Not too long ago, I was at an event for the Lifetime movie about Patsy (Cline) and Loretta (Lynn), and both Patsy’s daughter and Loretta’s daughter, Patsy, and her granddaughter were there. It’s like you know each other already. You understand each other so well. There is a comfort level there. Speaking of LGBTQ people, I want to recognize someone with my new single, the album’s title track. Waylon Payne (who co-wrote the song), his story is totally amazing. He wrote some songs for Miranda’s (Lambert) last album. He’s an amazing singer and songwriter. He’s got an album coming out. We wrote together and it was magic. He’s the son of Sammi Smith (“Help Me Make It Through The Night”).

GS: Looking For a Feeling is being released in late April 2020. The interview is taking place in early April, and the world is still in the grip of the deadly coronavirus and we’ve been told to shelter in place. What have you been doing to keep yourself sane and healthy during this time?

PT: Oh my gosh! I don’t suppose I can send you a picture on my phone, can I? You’re going to laugh your ass off [laughs].

GS: You said you were gardening, right?

PT: Yeah! This project is a mother! I had to build the bed up so high to keep the rabbits out. We got roving gangs of ravenous rabbits in town. All this dirt has to be shoveled in a little higher. You’re not working at ground level. You have to shovel it waist high. It’s like working on the chain gang, but I’m determined to get it done.

GS: When things return to normal, which we hope will be soon, will you be embarking on a concert tour?

PT: Yes. I don’t even know how to contemplate a world where that’s not feasible. When you’re onstage at a big festival and everybody’s singing along – not to go woo-woo – you’re kind of a shaman. It’s all about the energy of it. When it’s all happening and the music is right and the people are unified, it’s like church. We need those kinds of gatherings. The virtual thing is great. I’m trying to embrace that and do a few things online. My sister told me people are doing hilarious things online that are all kinds of cobbled together, warts and all. The humanness of it is what makes it so appealing. That’s all good and we can stay connected during this period of social distancing, but we need to get back together as soon as we can.