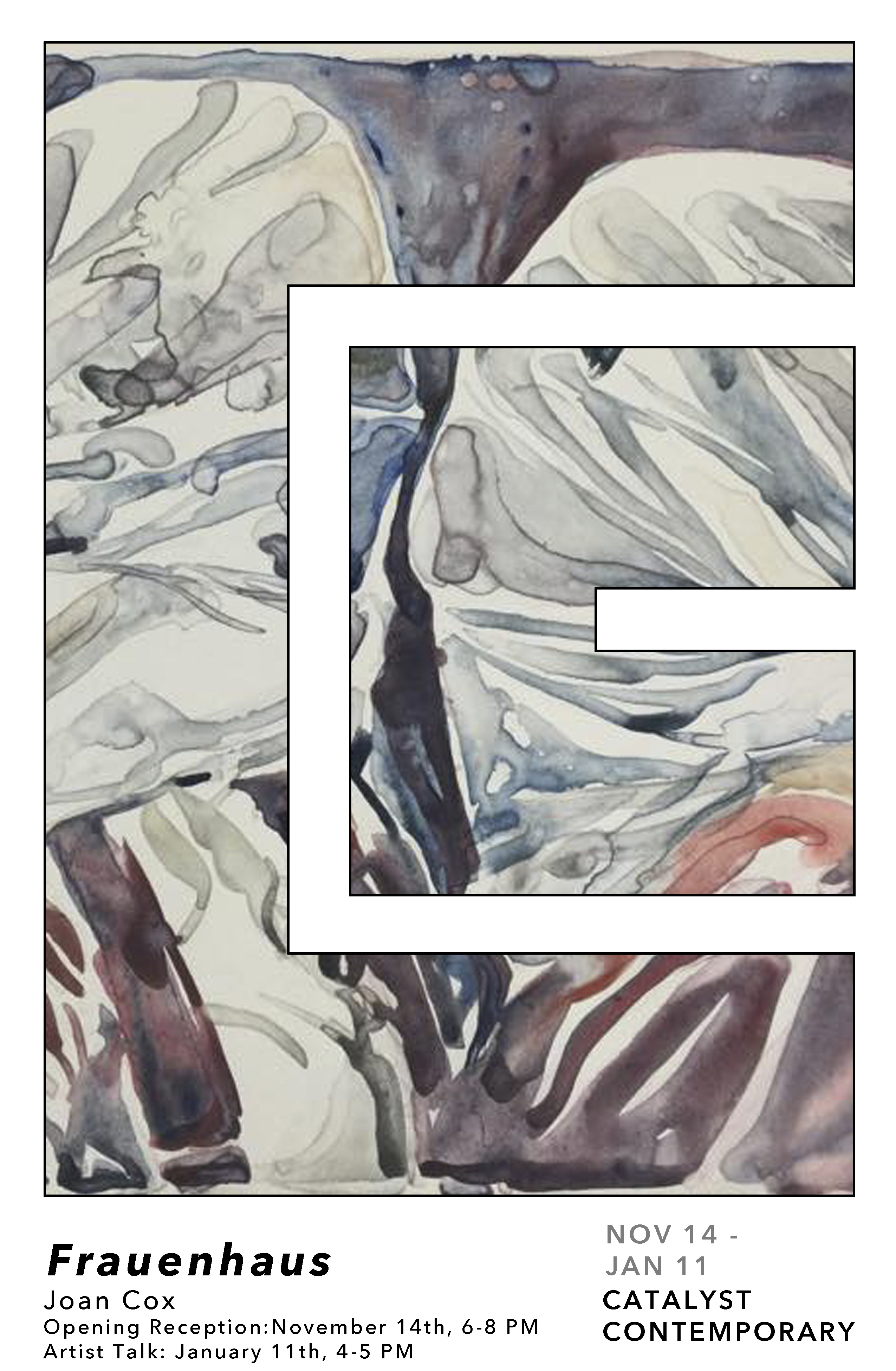 The selections featured in the show highlight narrative portraits of lesbian relationships and references their lack of presence in Western art history even though visibility and accessibility of the community has increased. Cox’s entrancing portraits, a mixture of large scale oil paintings and unique watercolor monotypes, with some rendered painstakingly realistic and others drifting towards the abstract, delivers her characters as archetypes of women as domestic partners. At times, the rendered actors are placed within the context of recognizable historical artworks, imbuing new meaning within the classic works and creating an idealized timeline in art history where indeed same sex couples have a place in the Pantheon of greatness.

Another facet of Cox’s work is the allusion to the lesbian community often overlooked due to societal dismissal, even enmity of these intimate relationships. For example, two abstracted female figures walking on the beach and holding hands could merely be friends or relatives. Societal thinking shies away from the fact they could be and are, in this case, lovers, willfully assuming the former description, even when evidence is presented otherwise.

Featured in Cox’s solo show is new installation work, which moves beyond the plane of the canvas and into a three dimensional consideration of motherhood in same sex couples. Demonstrating the true complexity of the archetypal figures in the bulk of the show’s inventory are sculptural installations in the darkened, second room of Catalyst. These installations of light, shadow, and paint present dramatic images of children. Stacked outward from the wall and delicately constructed, images of swings, strollers, and wagons, contained by empty gold-gilt traditional frames hanging in mid-air, attempting to frame the suspended image of an infant or toddler painted in soft white and pink tones on mylar. A light passes through the translucent material, projecting the child figure onto a stroller or wagon. When the viewer moves around the piece, the frame fails to contain all the images. Instead, the work seems as if the traditionally two dimensional space has been exploded, each layer viscerally separated from the last. These works speak to innate feelings of motherhood within a shared female experience, making whole Cox’s somewhat self-reflective intention within her work to create a truly domestic portrait – a safe home and family space.

The German term frauenhaus traditionally refers to a womens’ house and place of refuge. Within Cox’s real and imagined pairings – some taken from the lives of women in her own life, the “womens’ house” is redefined and extended to include a place of balance and acceptance, normalization, and shared female experiences, a meaningful and purposeful description originating from Cox’s own stay at the “Frauenhaus” in Berlin, a Lesbian-specific bed and breakfast, followed by her participation at a 2009 artist residency held in Traunkirchen, Austria. Moving beyond the conceptual aspects of the title, the gallery itself is transformed into a sanctuary in which the intimate relationships of female lovers is unremarkable and where viewers can envision the potential mundanity of these domestic lives. Frauenhaus seeks to create a space carved out specifically for these relationships in an effort to normalize, acknowledge, and elevate both societal and viewer acceptance that a woman may love another woman.”

CATALYST CONTEMPORARY is a fine art gallery focusing on contemporary art that tells stories. Located in Baltimore’s Mount Vernon neighborhood – the cultural heart of the city, Catalyst forges relationships between artists, collectors, and both creative & civic minded individuals. The gallery will represent artists nationwide that tell dynamic and powerful stories and have mastered the Baltimorean art of storytelling.