Now that some states have legalized marijuana use, it is a good idea to take a look at where things stand legally when it comes to it’s use in the workplace. Company leaders have had discretion when deciding whether to subject employees to drug testing, either pre-hire or during employment. Recently, a federal court affirmed this when it found that a New Jersey company did not have to waive a post-accident test for a worker who was a registered medical marijuana user. This decision means in the state of New Jersey, businesses can still dictate the terms of employment to include drug testing. Pot use is still illegal under federal law, and New Jersey state courts have generally found that private businesses may require workers to pass a drug test, noted Judge Robert Kugler of US District Court of New Jersey.

Courts in other states have sided with employers on drug testing, too. For example, in 2015, the Colorado Supreme Court found that, even though a worker was permitted to use medical marijuana under state law, his firing was justified because pot is still illegal under federal law. In contrast, in 2017, a Rhode Island court ruled in favor of a job candidate who was not hired because she disclosed that she was a medical marijuana cardholder and would fail a pre-employment drug test. In addition, the Massachusetts Supreme Judicial Count held that employees have the right to seek a reasonable accommodation for medical marijuana under the state’s disability law.

Employers are never required to tolerate on-the-job impairment. According to Myrna Maysonet, attorney with Greenspoon Marder, If you are a medical user and abiding by the rules, you may have some protections under state law.” However, there are no employment protections for workers who use medicial marijuana recreationally, even in the states that have legalized such use.

Working in healthcare myself, it has been especially interesting to watch how various states have reacted to legal marijuana use either recreationally or medically, to see how this has impacted the workplace. From my perspective, the concern is that the ability to perform one’s job while under the influence may have a horrific outcome for a patient. I know I would not feel secure knowing a surgeon, nurse, or other staff involved with my care are using marijuana, even if prescribed.

Advice provided by Bob Capwell, chief knowledge officer at Employee Background Investigations says “Employers need to review their company policies as they relate to changing legislation and where they provide services. States that have reasonable accommodation laws for medical marijuana cardholders are problematic and a concern for employers with blank prohibitions on medical marijuana users. Legal issues arising out of marijuana uses must be addressed on a state by state bases and specifically within approved medical marijuana states … there is no blank answer to this one.”

Taking this advice from Mr. Capwell, I think we will all need to keep our eyes on court decisions as they arise. For now, while the federal law remains unchanged, the variation of state law may leave employers confused as to how to comply, especially if they are multi-state employers. 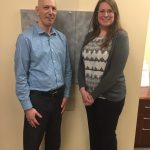 Lauren Lynch
Lauren Lynch has a collective 13 years of experience in Human Resources. She completed her undergraduate work at Arcadia University where she earned a Bachelors in Sociology with a double minor in Psychology and Anthropology. While earning her degree she also worked as an intern in Human Resources. Lauren has worked in HR under various industries to include Cable Communications, Technology, and Healthcare and has had a hand in recruitment, coaching and training, onboarding, employee events, benefits, policy, performance management, employee relations, etc. To continue her education Lauren completed her executive education at the University of Notre Dame. The 12-month program included certification classes to elevate skills in leadership and management. This is Lauren’s first time writing business articles and is eager to continue sharing the knowledge she has gained from her experiences.