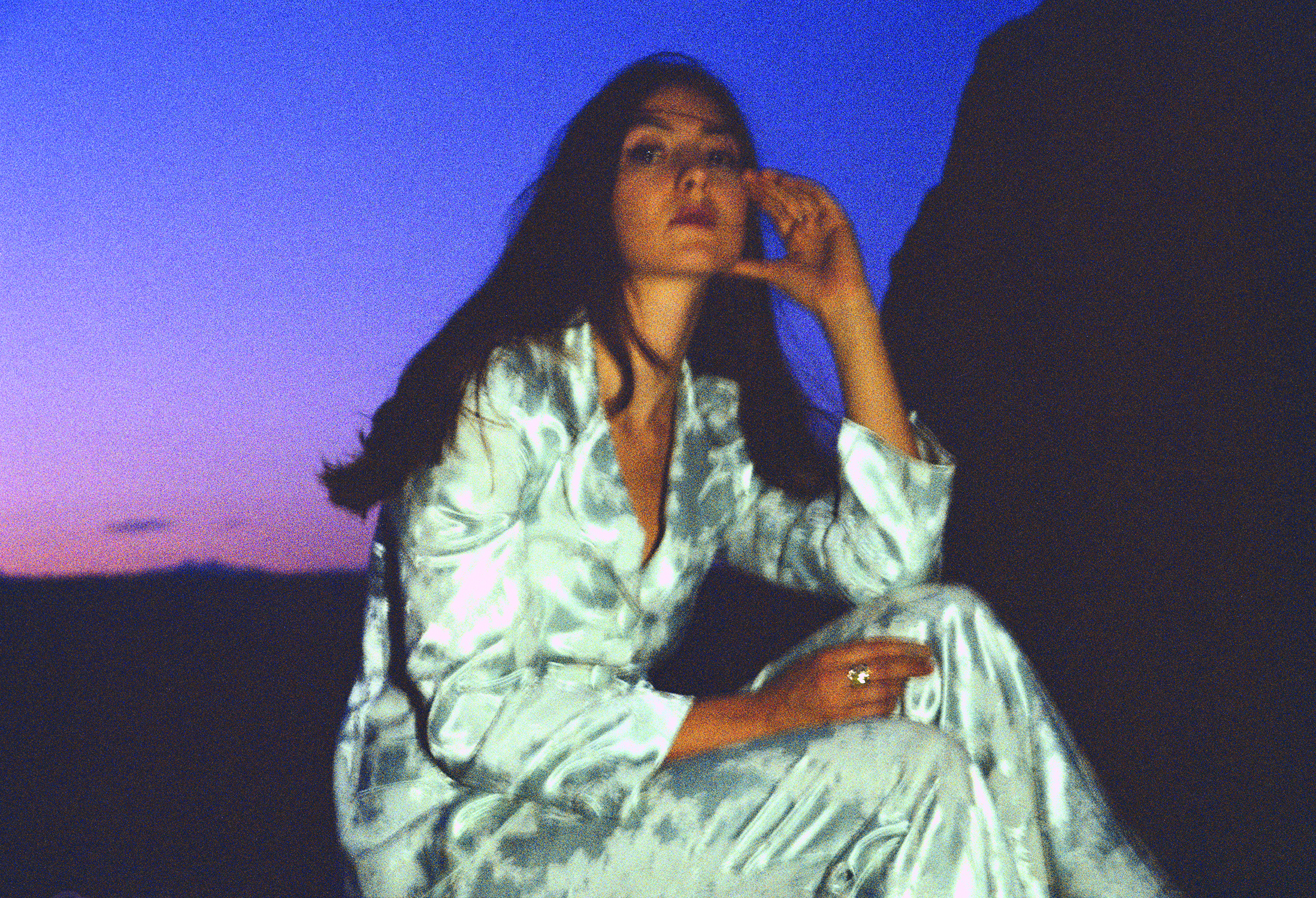 There aren’t a lot of musicians who have a backstory as fascinating as Jenny Lewis’s. A child actress who appeared in the camp/cult flick Troop Beverly Hills (alongside Shelly Long!) and the CBS series Brooklyn Bridge (alongside Marion Ross!), she went on to form the indie pop band Rilo Kiley. Her solo albums, in particular the amazing The Voyager (from 2014) and her new one On The Line (WB) put her in league with brilliant songwriters such as Aimee Mann. On The Line feels like an intentional companion piece to The Voyager and Lewis’s ongoing development as a songwriter of note shines through on “Hollywood Lawn”, “Heads Gonna Roll”, “Wasted Youth”, “Party Clown”, “Dogwood”, “Taffy,” and the title song.

From the first dramatic notes of “I Told You Everything”, and then the “holy shit” lyrics, you know that Remind Me Tomorrow (Jagjaguwar) by Sharon Van Etten is going to be unlike anything you’ve ever heard. A breathtaking achievement from start to finish, Van Etten, like contemporaries Mitski and Angel Olsen, is rewriting the singer/songwriter handbook. In terms of sheer musical variety alone, Remind Me Tomorrow never fails to dazzle, from the aforementioned modern balladry of “I Told You Everything” and “Jupiter 4” to the dance-floor anthem “Comeback Kid” to the futuristic pop of “You Shadow”, “Seventeen,” and “No One’s Easy to Love”, Sharon Van Etten has created one of the best albums of 2019.

Equal in its incomparable nature, Reward (Mexican Summer) is not only Welsh singer/songwriter Cate LeBon’s most accessible album, it’s also her best. This is immediately clear on the radiant opener “Miami”, that is as minimalist as it is abundant. A daring and thrilling pop album buoyed by tunes such as “Home to You”, “Mother’s Mother’s Magazines”, “Daylight Maters”, “You Don’t Love Me” and “Sad Nudes”, Le Bon’s aptly titled album is extremely rewarding indeed.

At the dawn of this decade, a British singer/songwriter named Rumer burst onto the scene and created a stir for the way she sounded remarkably like Karen Carpenter. On the incredibly sumptuous Titanic Rising (Sub Pop), Weyes Blood (aka Natalie Mering) pulls off a similar feat. Effortlessly constructing a nostalgic 1970s sound crossed with a 21st century mood, the songs on Titanic Rising soar. There’s not a false move on this magnificently accomplished ten-song album, making it difficult to choose favorite songs, but “Something to Believe”, “Everyday”, “Picture Me Better”, “Andromeda”, and “A Lot’s Gonna Change” definitely deserve to be mentioned.

Even if you dig Banks and got hooked on her beginning with her 2014 eponymous debut album, you have to admit that you had slog through more than half the record to get to the good stuff, on songs such as “Beggin’ for Thread”, “Change”, “Warm Water”, “Under the Table”, “Fall Over,” and “Bedroom Wall”. That’s less true of her new, third album III (Harvest), where she wastes little time in doling out attention-grabbing songs. Banks fattens up the sonics with atomic beats and synths on “Stroke”, “Gimme”, “Look What You’re Doing to Me”, “Till Now”, “Alaska”, and the gorgeous “What About Love” (on which we can hear the string arrangement by queer musician Owen Pallett).

This year seems to be the one in which several female singer/songwriters, such as Soak and the previously mentioned Cate Le Bon, are making tremendous forward leaps in their music. New Zealand’s Aldous Harding is another good example. Her exceptional new album Designer (4AD) is full of all sorts of aural surprises and delights, ranging from the title cut to “Zoo Eyes”, “Fixture Picture”, “Pilot”, “Damn”, and “Weight of the Planets”.

Originally released 25 years ago, and newly reissued in an expanded edition including nine bonus tracks, Garage Orchestra (Omnivore) by Cindy Lee Berryhill sounds like it could have just been written and recorded this week. The album’s timelessness is to Berryhill’s credit and a pleasure for listeners. Berryhill, whose first album Who’s Gonna Save The World? was released to acclaim in 1987, suffered from the sophomore slump with the follow-up and then redeemed herself with 1994’s Garage Orchestra. The album is full of Berryhill’s unique performance style and perspective, both of which come through on “Song For Brian”, “Radio Astronomy”, “Gary Handeman”, “Father of the Seventh Son,” and “Every Someone Tonight”.

On Solutions (Night Street / Interscope) her third full-length album in five years, K Flay (aka Kristine Flaherty) continues to straddle the worlds of pop and hip-hop. For the most part, Solutions does lean more towards pop and songs including “DNA”, “Ice Cream”, “Sister”, “I Like Myself (Most of the Time),” and “This Baby Don’t Cry” have the potential to help her reach a wider audience. Additionally, “Good News”, K. Flays’ first full-fledged dance track could earn her a following in the queer and club music scenes.

A skilled debut that is a raw and powerful breakup album, Ada Lea’s What We Say in Private (Saddle Creek) also features some of the singer/songwriter’s visual art in the accompanying CD booklet. Both audio and visual components combine for a distinctive experience. Lea balances experimentalism and accessibility and the outcome is compelling, especially on “For Real Now (Not Pretend)”, “What Makes Me Sad”, “Mercury”, and “180 Days”. With the right remix, “The Dancer” is sure to have everyone on their feet and dancing.

Those in-the-know may recognize the name Julia Shapiro from her band Chastity Belt and side-project Childbirth. A fierce feminist voice for her generation and beyond, Shapiro was notable for incorporating biting humor and wit into her songs with those bands. Perfect Version (Hardly Art), her solo debut is something else altogether, more serious and intimate. It’s a respectable move on Shapiro’s part, best represented in the songs “I Lied”, “A Couple Highs”, “Parking Lot,” and “Tired”.

Katie Toupin, like Julia Shapiro, is best known as the member of a band. In Toupin’s case, it’s her former band Houndmouth. Questionable album cover art aside, Toupin’s solo debut Magnetic Moves (Katietoupinmusic.com) will attract listeners on the strength of her voice and songwriting abilities. Knockout numbers include “The Hills are Calling”, “In Your Dreams”, “Lost Sometimes”, the retro “Someone To You”, and the title cut.

Led by the divine Davina Lozier, Davina and the Vagabonds may be based in the Twin Cities but its sound and style are pure New Orleans. Sweet and sticky as a warm beignet, Sugar Drops (Red House) picks up where Fitz & The Tantrums left off, but with the benefit of Davina’s dynamic pipes. Delectable original tunes include the title cut, “No Matter Where We Are”, “Little Miss Moonshine”, “Devil Horns”, “Deep End,” and “Magic Kisses”. The deluxe edition of the CD features five bonus tracks, including a cover of Nina Simone’s “I Want a Little Sugar in My Bowl”.

Weyes Blood performs on September 11th in Philadelphia at The Met and September 25th in Baltimore at Ottobar.