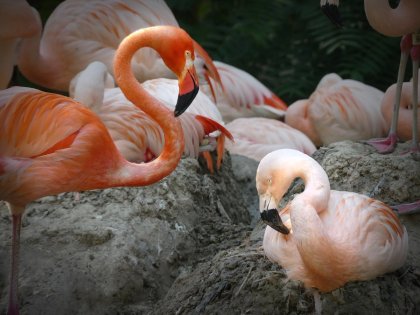 Denver – CBS’s local station reports that with just a few days before Denver’s PrideFest celebrations, the Denver Zoo is sharing the love story of a same-sex pair in their flock. The flamboyant flamingos are named after two LGBTQ icons – ’N Sync band member Lance Bass and Queen frontman Freddie Mercury. Among the nearly 80 birds in the exhibit, birdkeeper Brittney Weaver says the two have always been the standouts. “They have plenty of choices to choose from so we can’t really control what they choose,” she said.

Freddy Mercury is a Caribbean flamingo brought to the zoo in 1970, and Lance Bass, a Chilean flamingo, hatched in Denver in 2001. “So this happened in 2014 that we started noticing them hanging out and spending a lot of time together then we saw them participating in all those courtship behaviors, and then when they finally built that nest we knew,” Weaver said. While the male-to-male pairing is rare, it is not unheard of. The two species coming together, she says, is unique.

As far as their names, Weaver says 14 years with the flock and her passion for music just took over. “All the flamingos are named after musicians,” she said. “But these guys we wanted to name them appropriately for their relationship.” The real Lance Bass shared the story on Facebook, writing: “This is the best!! I hope Lance is the one with the frosted tips!!!” Denver Zoo officials responded, “Hey Lance, Freddie’s on the left and flamingo Lance is on the right, so he kind of does have dyed tips!” Zoo officials also said they are planning a special flamingo-themed event in August and invited Bass to attend. (Denver CBS4 at Denver.cbslocal.com/2019/06/11/same-sex-pair-flamingos-denver-zoo-lance-bass-freddie-mercury)