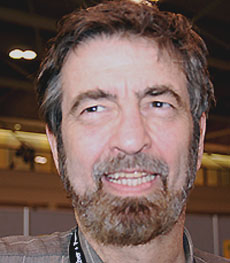 Boston, MA – David Scondras, who embodied the Boston Gay community’s dream of political power when he was elected to the City Council in 1983 and was later caught up in sex scandals involving young men, died October 21 of polycystic kidney disease, with his partner of 42 years, Bob Krebs, by his side. He was 74.

A Harvard graduate, Scondras was the first openly gay person elected to the Boston City Council during a time when LGBTQ people across the country had almost no political representation or legal protections. At that time, AIDS was ravaging the gay communities. In this climate, the charismatic Scondras immediately became a de facto leader of the gay community after he won election. As an openly gay man with a public profile, his refusal to closet himself in any way was an on-going act of political rebellion, and he always included his partner Robert Krebs, whom he later married, when he talked about his family.

Scondras successfully introduced a Human Rights Ordinance to protect gay and lesbian people from discrimination in the city. He also waged a long battle to gain passage of an ordinance providing domestic partner benefits to city employees. His work as a city councilor was informed by his earlier work as a community activist and organizer in the 1960s and 70s. in 1971, He was co-founder of Fenway Community Health Center — known today as Fenway Health — to provide free health care to those in need. In 1993, he lost his campaign for re-election and afterwards devoted his attention full-time to Search for the Cure, a nonprofit focused on the development of HIV/AIDS therapies that he founded in 1987. He also joined national advocacy efforts in support of the North American Man/Boy Love Association (NAMBLA). In 1994, organizers of national efforts to recognize the 25th anniversary of the Stonewall riots voted to ban groups such as NAMBLA and Scondras defended the organization on free speech grounds.

Boston fair housing activist Helen Cox remembered Scondras as a progressive with diverse portfolio. “We all knew David from what he did in the Fenway before he was elected to the Boston City Council in 1983 — going back to the late 60s & early 70s, when he was delivering meals to the elderly. He worked in the late 70s in conjunction with STOP (Symphony Tenants Organizing Project), which helped break an arson-for-profit ring leading to the indictment of 33 individuals, including landlords and city officials,” she said.

In 1996, Scondras was charged with indecent assault and battery for allegedly groping a 16-year-old boy in a movie theater. The youth reacted by beating up Scondras requiring his hospitalization. The charge was dropped after the boy refused to testify. In 2006, Scondras fell victime to a vigilante sting operation. He was arrested in the parking lot of a charter school after arranging via the internet to meet a 15-year-old boy there for sex. The person was actually a 20-year-old posing as a 15-year-old. Scondras pled guilty to child enticement and received 18 months’ probation.

Scondras is survived by Krebs, his husband and partner of 42 years, and his family in the Lowell area, where he grew up. At this time and according to David’s wishes, there will be no formal events taking place to honor his life. (Adapted from an obituary in Bay Windows by Sue O’Connell at http://www.baywindows.com/David-Scondras-1945-2020)

David’s 1983 campaign was exhilarating, a turning point in Boston politics as Mel King became the first person of color to make the mayoral run-off, and David became the first openly gay person — and Democratic Socialist — to be elected to the city council

David gained fame as an anti-arson crusader and affordable housing advocate. Progressive political leadership and hard work from tenant organizers meant Boston boasted rent control, won condo conversion bans, and came tantalizing close to just-cause eviction protections; it was in his office I learned that democracy could be an antidote to wealth’s privilege.

I also had a wake up that year as a middle-class white boy:

The destitute elderly mugging victim injured in the attack who was told Medicaid wouldn’t cover her “cosmetic” jaw surgery since she could still manage to eat … the trans prostitute beaten by police, with only her word against that of three cops … the uninsured PWA left on the street to die … a troglodyte city councilor whose campaign workers threatened to drag me and the bf behind their pickup …

And no one would have imagined the Boston City Council of that era to pass a gay rights bill on a 12-to-one vote! David understood that moral suasion only went so far, that raw power mattered, and used the city’s gay bars to organize a letter-writing campaign (from the “riff raff” ignored by previous efforts) that bulldozed his colleagues into line.

David’s visionary politics also meant I got to meet some political heroes: Jane Fonda, Cesar Chavez, John Lewis, Geraldine Ferraro, and managed to listen in on a phone call to Managua as David visited with Daniel Ortega. I also met, as co-workers, two lifelong political inspirations, Gary Dotterman and Tony Watson, both now global activists using their Boston-gained skills for justice around the world; David was the also first, and for years the only, councilor to hire Spanish-speaking staff, Elena Rivas, who taught me political idioms that I dare not repeat!

I also learned: never, EVER, cross a picket line.

David hosted regular weekly meals at his Fenway home, a chance to chinwag with other activists; it was there in his basement he “lent” me (I still have it …) Stephen Jay Gould’s first collection of essays, an introduction I still treasure.

David’s partner Robert Krebs was appreciated as a steadying influence on the councillor’s sometimes mercurial nature; I remember Robert introducing me to Will Rogers’s on-target quip, “I am not a member of any organized political party. I am a Democrat.”

David’s outside-the-box-thinking often reminded me of the quote attributed to RFK: “Some see things as they are and ask why, I dream of things that never were and ask, ‘why not?’”

French Wall was an aide to David Scondras in Boston’s city hall and later was editor of the longstanding Boston-based gay magazine, The Guide.