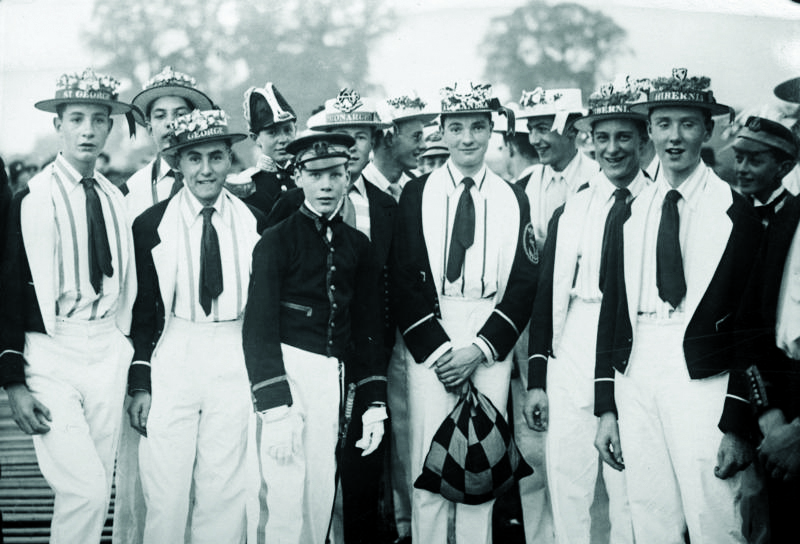 What happens when a teenage schoolboy at England’s storied Eton College grows enthralled with a dashing young teacher fresh out of Oxford? For the rest of the story, read Edmund Marlowe’s pot-boiling novel Alexander’s Choice (available on Amazon).

Eton has produced 19 British prime ministers and writers such as Orwell, Shelly, and Huxley. With their privileged all-male inmates scaling adolescent hormonal peaks, the likes of Eton or Harrow – England’s great public schools (that would be “private schools” in Americanese) – have long been hothouses of homoerotics, tolerance of which has waned and waxed along the decades and centuries. Still, the teacher-student dalliance at the center of Alexander’s Choice would have raised eyebrows and wagged tongues probably at any point over Eton’s half-millenium. Amidst the anti-sex hysteria of Margaret Thatcher’s 1983, however, the year Marlowe’s novel unfolds, the ramifications of forbidden love soon ripple far beyond school gates, magnified through warped lenses of the characters’ class strivings, self-doubts, and ideological zealotry.

At the novel’s center is Alexander Aymler, a 13 year old just starting at Eton, blessed with a solid family (dad’s a judge), keen wits, a sensitive character, and dashing blond looks. His sexual awakening comes with his first orgasm, from self-pleasuring under the covers in his dorm room, leading to a “a spasm of delight and joy purer than any he had imagined could exist.”

From his first arrival at school, Alexander had caught the eye of Julian, another boy, a few years ahead. Julian’s footing at Eton is far less secure than Alexander’s. The son of a Jewish scrap dealer who’s scrimped to save up tuition fees, Julian is besotted by desire for Alexander – which he struggles to hide from his peers as much as his mother’s Cockney accent. An act of gallantry on Julian’s part sets the two boys up as fast friends. Alexander’s readings of Greek history (particularly the male amours of his legendary namesake conqueror) have inflamed the boy’s erotic imagination, and he’s more than up to taking his friendship with Julian to a new level. In a tragicomedy of ill-luck and adolescent awkwardness, however, lip and cup (or rather, cock and bum) fail to connect.

Meanwhile, after he hands in a superb short story for homework, Alexander catches the eye as well of a new English beak (“teacher” in Etonion patois), Damian Cavendish, fresh out of university, who invites his star student, quite innocently, for extra tuition in his lodgings.

Both teacher Damian and student Alexander come to their eventual entanglement from prior hetero experience or fantasy. Suddenly alive to the joys of sex after his first orgasm, Alexander starts thinking about the rarest commodity at Eton: girls. “He longed more than anything to see a naked one, or just a picture of one….” Damian’s virginity was lost at Oxford with co-ed Dashka, who becomes his lover until graduation, when she decamps for the foreign service. The growing bond between Damian and Alexander takes them both unawares, before carrying them to shores neither had ever imagined.

Marlowe’s finely-wrought human drama effectively conjures the webs of friendship, rivalry, and crushes among the boys, who range from about ages 13 to 18. Their relationships are set against the solicitous backdrop of their teaching masters and house mothers – usually the boys’ socioeconomic inferiors – who aim to guide their charges into the firmament of UK’s upper crust while not unduly risking their own careers.

When the pseudonymous Marlowe’s book first came out, it made a splash in the British press. Eton looms large on the domestic landscape, and the author’s knowledge of the school’s Delphic Mysteries left no doubt he was a graduate. “The 422-page potboiler is being hailed as the Etonian version of Fifty Shades of Grey,” gushed the UK Daily Mail, which went on to quote writer (and Old Etonian) Guy Walters, “It paints an incredibly racy picture of gay sex at Eton. Put it another way: it’s really dirty.” A blogger at the London Review of Books praised the novel, noting “the sex scenes are thrillingly frank. And there’s fun to be had … in ‘trying to identify who the people in the book might be in real life.’”

Like the surprising art house hit Call Me By Your Name, Alexander’s Choice celebrates male homosexuality as a chocolate nut cluster fully capable of sharing the Whitman’s Sampler with heterosexuality’s strawberry crèmes. Such admixture is certainly how homosexuality has thrived under radar in most times and places, fueled by young male sexual exuberance. But such mingling of flavors goes against the grain of LGBTQ’s preference for clear, abiding categories.

Call Me By Your Name was a crossover hit with straight audiences – a friend tells me he saw a middle-aged woman sobbing at one Manhattan showing – while garnering surprisingly lukewarm reviews in gay papers. In the same vein, the British gay magazine QX panned Alexander’s Choice, saying it “smacks of delusional innermost fantasies transposed into a novel’s form.” But maybe, rather, both works are emblems of a new maturity in handling homosexuality, welcoming same-sex eros sans the burden of gay identity.

One of the fascinating highlights of Marlowe’s novel is the evidence it musters that public acceptance of gays has actually reduced the chances for males to share intimacy. At one point, Julian gets to read the “House Books” – write-ups for posterity by the class captain of every boy in his house. The House Books, going back centuries, are off-limits even at Eton, except to members of the “Library,” a tiny elect in each class. Julian finds – and presumably Marlowe has done homework only an Old Etonian can do – that up until the mid-70s, the books were filled with gossip about which boys were in love (or rutting) with whom, and which were the hottest numbers.

Marlowe’s account jives with what a British man, who finished prep school in 1969, told me. It was his last year, and he was a prefect overseeing a dorm of new boys. At the start of term, at lights out, the usual game of musical beds began – boys tucking in with their favorites for sex and solace – just as he remembered from his own cohort a few years prior. Then in the dark one boy suddenly called out, “Stop it! That’s gay.” And there was no more nighttime sex play in that dorm again. Social movements are not ends in themselves but vehicles for human well-being. In its stupendous success, has LGBTQ become a straitjacket? At the close of Goethe’s Faust, the Devil is distracted from taking Faust’s soul to Hell by the beauty of three boy angels. Last month, the Schwules Museum, Berlin’s LGBTQ archive – oblivious to the Nazis’ burning of Magnus Hirschfeld’s library in 1933 – turned over a donor’s collection to the police because some of his erotica looked underage. Meanwhile, Thefederalist.com has just declared it’s time to ditch Oscar Wilde as gay icon for his dalliances with London teenagers. Works like Alexander’s Choice and Call Me By Your Name push back against LGBTQ’s now straitened boundaries to point our gaze to broader human vistas.