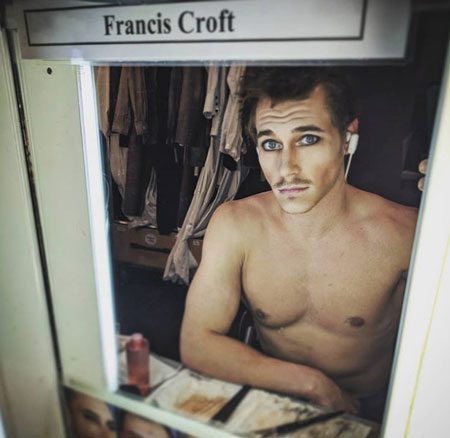 Cirque du Soleil’s Corteo runs from July 3rd to 7th at Royal Farms Arena – allowing audiences young and old to “get carried away with life” in the aftermath of the passing of clown Mauro. His spirit, happily, is still with us. Instead of mourning, the funeral cortege celebrates the here and hereafter with laughter and exuberance. Regret and melancholy retreat in the face of a cavalcade of lively recollections of a life gloriously lived. Baltimore OUTloud recently chatted with performer Francis Croft.

“Corteo is a very special show because it portrays a bit more diplomatic side of circus,” explained the Canadian native. “The subject of the show is a funeral, but it’s interesting because it’s more about celebrating the life of that clown. It’s very interesting because there are parts of the show that are told both in the present and the past. Audiences will have a difficult time figuring out if we are in the imaginary or reality. It’s a show for all ages because even if the subject seems deep, it’s a very joyful moment with beautiful images and acrobatics that Cirque is known for.”

Croft, who began gymnastics at the age of five, joined Cirque in 2017. A gymnast for over 15 years, Croft has worked on Corteo since its creation in 2017. “I’m very lucky because I’m part of two very interesting acts. They are both very high-energy – a bed jumping act and ‘Tournik.’” The Tournik act from Corteo marries horizontal bar techniques with circus arts. The artists perform on a central cube-shaped structure, with two additional bars on each side of the cube. The various parts of the structure turn, sometimes all in the same direction, sometimes in opposite directions … just to keep everyone on their toes.

Croft says he enjoys travelling around and seeing the world with the Cirque du Soleil road show. “It’s a very nice opportunity to perform in this production,” he says. “I’ve learned a lot about myself and it’s been so very lovely.” t