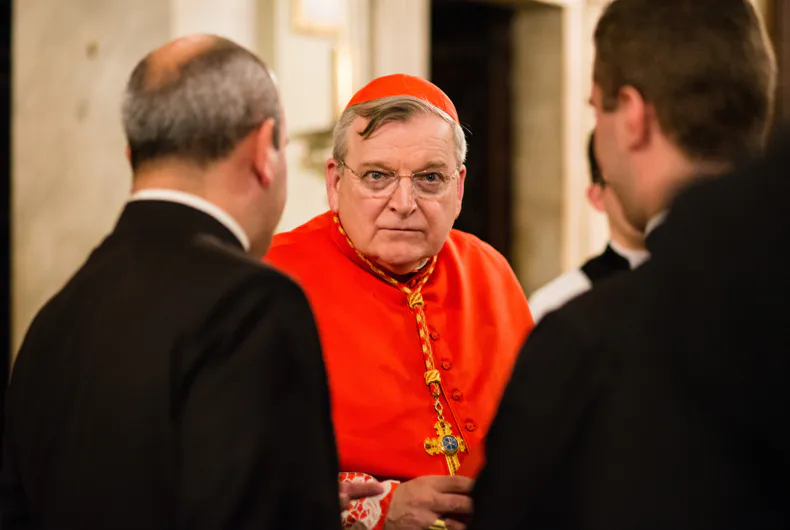 The Vatican – David Hudson writes for Queerty that Catholic Cardinal Raymond L. Burke has been hospitalized with Covid and placed on a ventilator, according to a Tweet on his official Twitter account. The 73-year-old, who has previously spoken out against social distancing and expressed skepticism regarding vaccines, announced August 10 that he had been diagnosed with Covid. He said in a Tweet that he was “resting comfortably and receiving excellent medical care.” However, on August 14 his communications team said he had been moved to a hospital in Wisconsin, where he previously served as an archbishop, and was on a ventilator. On August 21, his team reported that he has been removed from a ventilator but remains hospitalized.

It is unknown if Burke has been vaccinated, but he is known for speaking out against restrictions to slow the spread of coronavirus. Last year, echoing former President Trump, he referred to it as the “mysterious Wuhan virus” and said that certain forces were using the virus to “advance their evil agenda”. In May 2020, speaking at the Rome Life Forum, he spoke out against the idea of mandatory vaccine programs, saying “it must be clear that vaccination itself cannot be imposed, in a totalitarian manner, on citizens.” In the same speech, Burke made reference to groups who suggest, “a kind of microchip needs to be placed under the skin of every person, so that at any moment he or she can be controlled by the State regarding health and about other matters which we can only imagine.” He said such a notion “violates the integrity of its citizens.” Burke has also criticized the church for not doing more to demand that church services continue in-person during the pandemic.

Burke has made headlines for his conservative views and has been a vocal critic of Pope Francis. In 2014, while Cardinal Prefect of the Supreme Tribunal of the Apostolic Signatura, Burke was asked by Life Site News whether parents should allow a gay son to bring his male partner to a family gathering where grandchildren were present. Burke said same-sex relationships are “intrinsically disordered”, and therefore, children should not be exposed to them. Shortly after these comments, Burke was demoted by the Pope and switched to the far less senior post of patron of the sovereign military order of Malta. Burke has continued to speak out against LGBTQ rights, criticizing Ireland for legalizing same-sex marriage. He has also said he would not give communion to pro-gay lawmakers and earlier this year questioned whether President Biden is a real Catholic. (Queerty – David Hudson at https://www.queerty.com/anti-gay-catholic-cardinal-vaccine-skeptic-hospitalized-covid-20210816?utm_source=Queerty+Subscribers&utm_campaign=49a6dcb205-20210816_Queerty_Newsletter&utm_medium=email&utm_term=0_221c27272a-49a6dcb205-431876119)