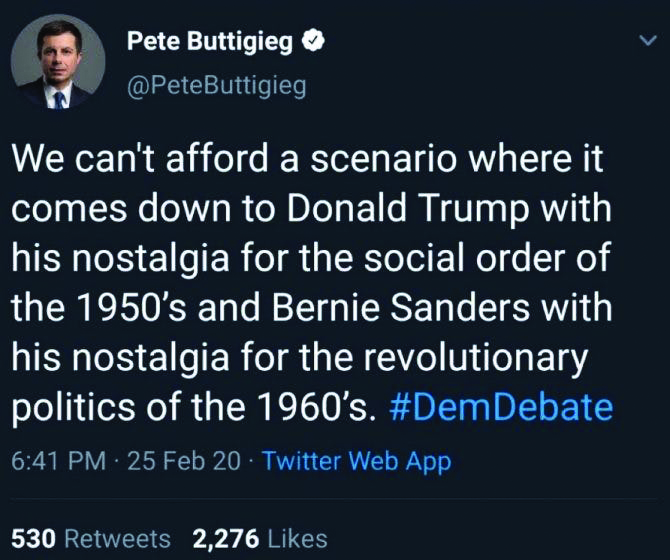 Columbia, South Carolina – Sometimes oratory – a flair for a good soundbite – can be dangerous and revealing, as former presidential candidate Pete Buttigieg found out after the South Carolina debate. As Queerty reports. during the debate Bernie Sanders became a popular target among the remaining field of candidates and Buttigieg prepared a zinger to go after Sanders’ reverence for the “revolutionary politics of the 1960s,” and it’s not sitting well with many queer voters. “I am not looking forward to a scenario where it comes down to Donald Trump with his nostalgia for the social order of the 1950s, and Bernie Sanders with a nostalgia for the revolutionary politics of the 1960s,” Buttigieg said at the debate, drawing what many view as a false equivalence between the fear-driven nationalism Trump exploits and the passion of the left to affect change. Buttigieg was clearly pleased with the line, as evidenced by him repeating it on Twitter:

Obviously, Buttigieg realized the oopsie on that one. The people that were offended definitely have a point. Pete has to be careful about attacking the past generations. They are the ones that actually show up to vote and they did live through the battles. (Queerty – Dan Tracer at queerty.com/gay-twitter-lot-say-deleted-tweet-mayor-pete-20200227)