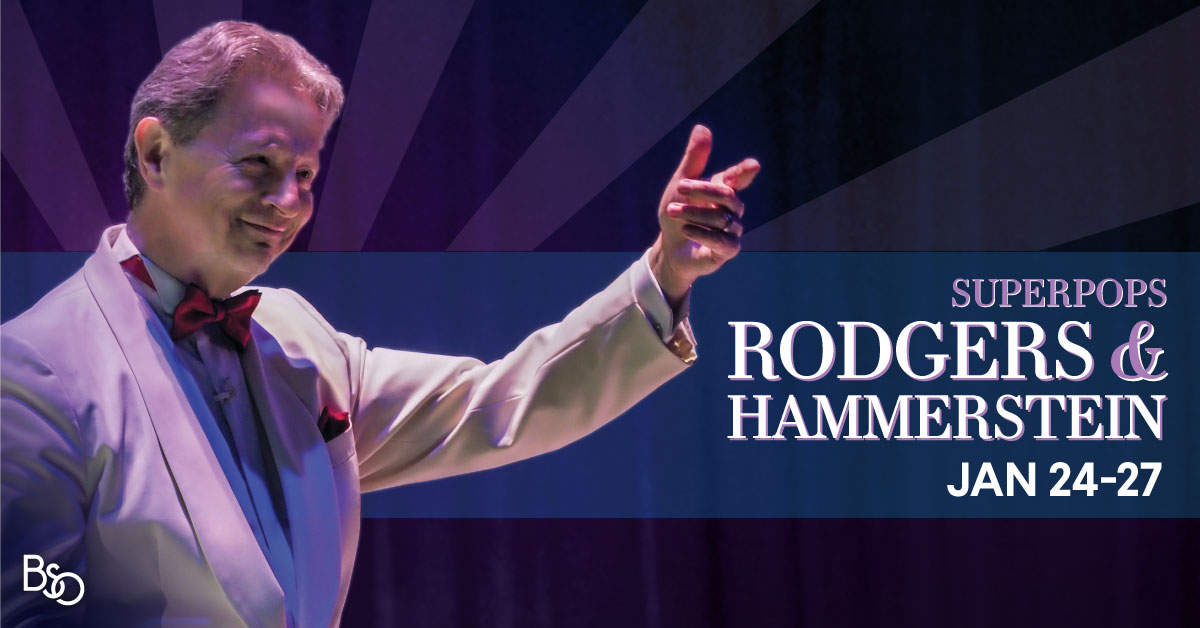 Spend an enchanted evening listening to the music of Rodgers and Hammerstein on January 24th – January 27th. Led by Principal Pops Conductor Jack Everly, the Baltimore Symphony Orchestra (BSO) will perform musical classics from The King and I, South Pacific, The Sound of Music, and more. Broadway stars Ben Crawford, Ted Keegan, and Ashley Brown as well at the Baltimore Choral Arts Society will join the BSO for this captivating performance.

“The music of Rodgers and Hammerstein speaks to people of all ages and tastes. Some of the songs that we’ve come to know and love were written over half a century ago, and not only do they still hold up musically, the messages behind the music continue to move and inspire listeners,” says BSO VP & General Manager Tonya McBride Robles. “As a creative team, they had a huge influence on the musical genre and pushed the subject material in musicals beyond where it had been previously. Whether it’s coming of age, overcoming cultural differences or finding love in places you might not have expected, the themes that we find in the works of Rodgers and Hammerstein ring true to this day and will continue to do so for generations to come.”

The iconic music of the musical duo could not be in better hands than with those of Jack Everly and the BSO. “We are very fortunate here at the BSO to have the fantastic Jack Everly as our Principal Pops Conductor. Maestro Everly has extensive and impressive roots in Broadway – he conducted Carol Channing in Hello, Dolly! hundreds of times,” says McBride Robles. “If you’ve never been to a show led by Jack, you really should come and see him in action, and the Rodgers and Hammerstein performances are the perfect opportunity to do that. Jack’s fun and engaging performance style and the way that he interacts with both the musicians on stage and the audience really bring the crowd to life and allow us to put our own unique spin on these classic works.”

Rodgers and Hammerstein will be an evening to remember. “Audiences for the BSO’s Rodgers and Hammerstein performances are guaranteed to have a great time and to go home singing all the incredible songs that are featured on this program,” says McBride Robles. “For these concerts, we will also be joined by three amazing Broadway singers – Ben Crawford, Ted Keegan and Ashley Brown, and their vocal talents and stage presence bring a whole new level of entertainment to the performance. Whether you are a seasoned fan of Rodgers and Hammerstein or a first-time listener, this is truly an event that you won’t want to miss.”

Rodgers and Hammerstein will be performed at the Music Center at Strathmore on Thursday, January 24th at 8pm and at the Joseph Meyerhoff Symphony Hall on Friday, January 25th at 8pm, Saturday, January 26th at 8pm, and Sunday, January 27th at 3pm. For ticket information, visit BSOMusic.org or call the box office at 410.783.8000.