Betty Who’s gay fans love her and she loves them right back. With a voice as big as Australia (that’s 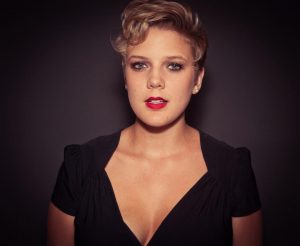 where she was born Jessica Anne Newham), Betty Who is someone who knows the value of an anthem. After all, she packed both her 2014 debut Take Me When You Go and 2017 follow-up The Valley with memorable ones. One such tune, “Somebody Loves You,” figured prominently into a viral Youtube video, featuring a dancing flash mob, in which a gay man proposed to his boyfriend in a Home Depot in Utah. Known for including LGBTQ Pride festivals as part of her multi-city concert tours, you can be sure she’ll be singing “Somebody Loves You,” as well as her other hits, wherever she’s performing. I had the pleasure of speaking with Betty Who about her music and much more.

Gregg Shapiro: What is the genesis of the name Betty Who?

Betty Who: It actually came from a song I wrote forever ago. I had named the song “Betty Who” because it sort of just felt right. Then a year or so later when I was deciding on a stage name, that name popped back up and I tried not to overthink it! If it feels good, just go with it.

What can you tell me about your ink?

I have ten tattoos now, I think [laughs]! I don’t even know anymore. I’m fairly precious with my body and what I want to put on it so I have tried to not go too crazy. But you know what they say, once you start you can’t stop [laughs]. My favorite one actually makes a cameo on my album cover for The Valley. It’s coordinates of places I’ve called home over my lifetime.

Your cover of Donna Lewis’ “I Love You Always Forever” on your recent album The Valley is a good example of the `90s influence on your music. Who are some of the other artists you admire from that decade?

Britney Spears is one of my favorite artists ever. I could teach a course in the study of pop just based on her first three albums. Her and Usher, particularly his 8701 album, were very important in my early years of music.

In September 2013, your song “Somebody Loves You” was incorporated into a Youtube flash mob video, which went viral, in which Spencer Stout proposed to his boyfriend Dustin at a Home Depot in Salt Lake City. What did that mean to you?

It still, to this day, means the world to me. Every time I watch it I don’t just well up with tears, I actively sob! It’s such an honor to be included in somebody’s life story like that. To have written the song that is the soundtrack to this massive moment in someone’s history is all I could ever hope for as an artist.

Were you invited to the wedding and did you attend?

I was and I did! I actually sang “Somebody Loves You” as they walked down the aisle, although I feel like I didn’t see a lot of the wedding because I was so emotional I had to sort of shield my eyes so I could still sing!

How many other same-sex weddings have you attended?

I’ve only attended a handful of weddings in my life, but I have been invited to more same-sex weddings than I can count [laughs]!

Prior to this happening, had you been aware of LGBTQ folks being interested in your work?

It was fairly clear to me that I had this very passionate, underground LGBTQ following from my first show. Truly it was a shock when it started happening, I couldn’t believe anybody at all wanted to come to my show, let alone an entire room full of gay men. I was so happy to have anybody at all show up [laughs]!

Your songs are often cited for their messages of inclusivity, self-love, and body positivity, with the song “Beautiful,” from The Valley, being one of the best examples. Please say something about those kinds of messages in your music.

I struggle just as much with confidence and body dysmorphia as the next girl. Particularly in my line of work; it gets really hard to find your way out of darker moments when everybody looks to you to be a certain way. So, songs like “Beautiful” are as much for me as they are for my fans. Sometimes I think I still need to be reminded to be kind to myself.

Speaking of “Beautiful,” you embarked on the Beautiful Summer Pride Tour in 2017 in which you performed at Pride Festivals in Kansas City, Buffalo, Milwaukee, Des Moines, Albany, Columbus, Knoxville, San Francisco, Provincetown and Reno. How did this concept come about?

I have played at least a hundred Pride festivals over the last five years. Every summer I embark upon this never-ending circuit of fabulous shows and humans celebrating the most wonderful parts about themselves. We named the tour “The Beautiful Tour” because it felt the most appropriate for the energy I wanted to bring. I know there is a lot of hate and judgment being thrown around and I wanted to create an environment of safety, a place anybody can come and say, “This is who I want to be today, and I’m okay with that, so you should be okay with it, too.”