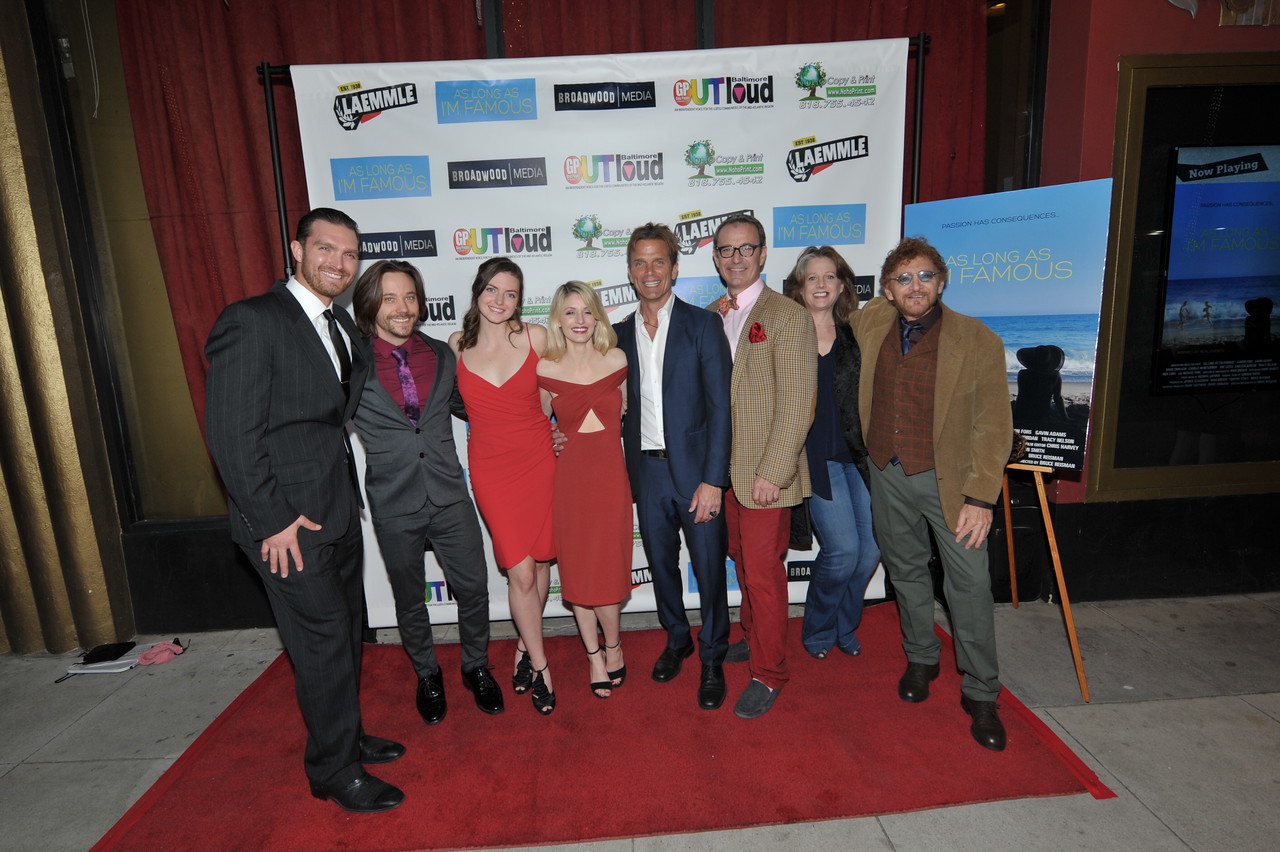 On Saturday, March 16th, as the lights of the Ahrya Fine Arts Theater in Beverly Hills, CA slowly dimmed, audiences cheered and clapped as the premiere of Broadwood Media’s “As Long as I’m Famous” danced across the silver screen.  Baltimore OUTloud was there as Hollywood’s glitterati graced the Red-Carpet event for the film whose ending was met thunderous applause.

These names may not be familiar to movie audiences of today, but the story of forbidden love, mental illness, and the creative process has been presented in a witty, often heartbreaking journey led by the young “Sid” as he walks among his yesterdays.  Director Reisman also pays homage to several movie genres, from classy-sassy Geroge Cukor’s “Dinner at Eight”, Bob Fosse’s “Chicago”, the black and white noir boxing pictures of John Garfield, and the more recent “Marvelous Mrs. Maizel”, evoking another time and place, whose virtues and humor are as accessible today as they were in the 40’s and 50’s.

As Reisman’s story of life ‘behind the curtain’ unfolds, the chemistry between actors Aaron Fors (Sid Lumet) and Gavin Adams (Monty Clift) smoldered on screen. Fors’ star-making performance really holds the film together.  The intimacy between these two, rugged men depicted a love that was both romantic and normalized in its very existence.   The fiery passion also exuded between actor David Chokachi (Gene Tunney) and actress Camille Montgomery (Nedda Logan).  Chokachi’s performance in the film was a career-defining change of pace for the actor who showcased his acting prowess.  Chokachi was equally matched with bombshell Montgomery’s vivacious interpretation of Nedda. The beautiful and brilliant Chelsea Jordan portrayed Sid’s blind girlfriend, the scrappy Hannah, who turns the story on its ear.

The wit and style of Reisman’s script is an intellectual’s veritable candy store that audiences will find gratifying. Under his direction, Reisman was able to pull out powerhouse performances from his cast.  The film’s cinematography, under the eye of artistic Ryan Brown, is positively mesmerizing, set against composer Gordon Smith’s original music score. The film larger-than-life locations, which are astounding for a ‘small’ film, takes audiences through the urban streets of New York, costal locations, the Hollywood Hills and opulent interiors of The Golden Age of Film.    The uniqueness of the film’s style and the way these characters interact with each other, are what will fascinate audiences of all ages. Its 1948 issues are more relevant and honest than ever now in 2019. The astonishing chemistry between the cast and crew exuded both on and off-screen.  This camaraderie was emphasized on the red carpet.

Actress Cheryl Hines (“Curb Your Enthusiasm,” “Suburgatory”) and husband Robert F. Kennedy, Jr. both greeted fans as they walked the red carpet.  Actor Brian Krause (“Charmed”) also came out to lend his support for the film, which takes audiences through a compelling, romantic and witty homage to Broadway and Hollywood legends of the Golden Age.