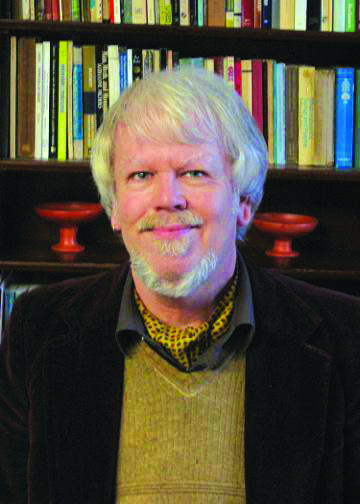 On November 21st 2019, a right-wing student activist tied to anti-gay Republican Texas politics launched an effort to fire a tenured, openly gay University of Texas, Austin, classics professor for his academic work on Ancient Greek and Roman sexuality. In short order, her campaign was hijacked by violent left-wing radicals, who attacked the professor at his house. There was a brick thrown his window, slanderous graffiti spray-painted on his Austin home’s facade, and a mob attack that forced him from his home under police escort.

“Students for Safety” put out a call before Thanksgiving for Prof. Hubbard’s “immediate removal from his position as a professor,” based on academic work he has published on Greek and Roman homosexuality, whose major form was courtships by men of adolescent boys. This research – published in major classics journals and by the University of California Press, among others – made Hubbard, the group claimed, tantamount to one “who advocates for violent crime against teen boys.”

A handful of protesters disrupted a large lecture class by handing out flyers to all his students and teaching assistants as they entered the auditorium. Four non-students in the auditorium tried to initiate a walk-out, but none of his actual students followed them.

The press contact for “Students for Safety” was given as sophomore Sarah Blakemore. Anyone who looked up her Facebook page saw that she lists her interests as “Republican politics, gun rights, and modelling,” and posts a picture of herself with a high-powered rifle and dead deer. Her father is a prominent Republican political operative close to Lt. Gov. Dan Patrick, well-known for his aggressive anti-LGBT agenda, as exemplified in his quickly withdrawn tweet after the 2016 Orlando gay bar massacre that “God cannot be mocked. A man reaps what he sows.”

The effort to get Prof. Hubbard fired was related to a broader campaign to fire three other professors, who had already been disciplined by administrators for minor violations of the school’s sexual conduct rules. A demonstration outside the Austin campus’s famous tower on December 6th drew some half-dozen protesters with a banner and was essentially ignored by the student body who walked on past trying to ignore them.

The initial right-wing effort to get Prof. Hubbard fired was hijacked and escalated by left-wing “Antifa” vigilantes. Using tactics out of the Klu Klux Klan playbook, left-wing radicals associated with the self-avowed communist splinter group “Popular Women’s Movement” (formerly the “Student Revolutionary Front”) and its apparently connected website Incendiarynews.com orchestrated a mob attack on the professor at his Austin home. A cinder block was thrown through his window at 3:30 am on the morning of December 9th and the house defaced with slanderous graffiti bearing the group’s signature hammer-and-sickle tag. A nearby optical shop was spray-painted with the threat “Pedo Hubbard, watch your back.”

On the evening of the same day, after leafleting the professor’s neighbors and spreading inflammatory falsehoods about his sexual orientation, a mob of some 15 to 20 vigilantes, most covering their faces with masks, trespassed onto Prof. Hubbard’s yard, and gathered at his house, pounding on his front window and door, and shooting video of his home’s interior through his window – all footage the group live-streamed on Twitter. Amidst the overt threats of violence, Hubbard was escorted away from his house by police, while the mob taunted them as “pigs” and tried to blind them by shining torches in their faces.

According to an article in Incendiary News, the “home demonstration against Hubbard was intended to take the fight out of classrooms and directly to the doorsteps of these men, showing them that they are not safe anywhere.”

In the wake of Prof. Hubbard being forced from his house, university spokeswoman Shilpa Bakre, termed the protesters’ behavior “unacceptable.”

But despite the vigilantes’ amply documenting their threats and harassment, as the news site College Fix noted in its headline on December 13th, “Students stalk professor over his scholarship on ancient sexual practices. University does nothing.”

Reporter Greg Piper wrote, “What will the University of Texas do if you stalk a professor and harass him at home because you’re offended by his scholarship? Nothing of substance, if the taxpayer-funded university’s response to student harassment of Thomas Hubbard is any indication. … The Monday night protesters, working under the moniker Fire the Abusers, documented their illegal harassment and called Hubbard a ‘known pedophile.’ That slander, based on nothing more than Hubbard’s scholarship, provides the professor grounds to sue for defamation if he wishes.”

The attacks on Prof. Hubbard from both the anti-gay right and left “Antifa” vigilantes point to the perilous state of academic freedom on today’s campuses. “Universities have the job of taking the long view and the big picture, testing questions of vital social import against evidence from specialized and maybe unexpectedly relevant fields,” said one gay academic who didn’t want to give his name. “Vigorous disagreement is absolutely allowed – but descent into harassment, slander, stalking, and assault threatens the possibility of free inquiry on which universities – and a democratic society – depends.”