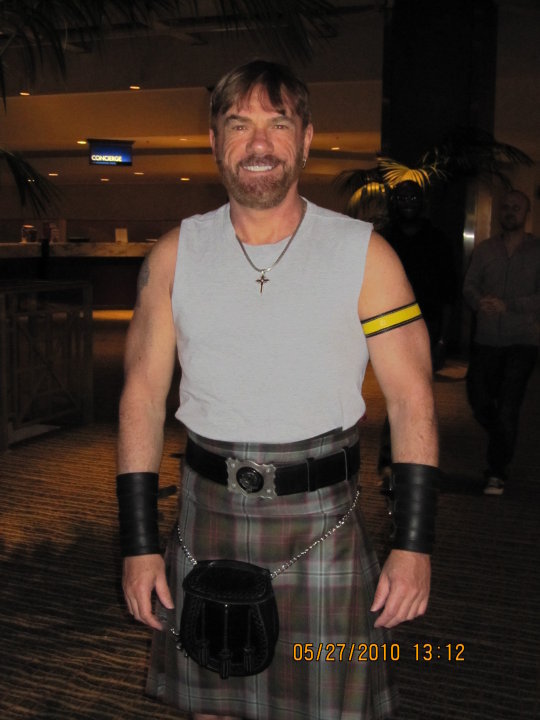 Since I started writing this column in 2005, I interviewed many Mr. Maryland Leather titleholders. Recently I sat down with one that I missed. I was excited to finally tell his story because he is also a dear friend. Allow me to introduce you to Lord Stephen J. Cather, Mr. Maryland Leather 2005. (Since Steve owns a very small piece of land in Scotland, he has officially been recognized by the Scottish Parliament as a lord.)

Born in Aberdeen, Maryland, and raised in the state’s Cecil County, Steve has resided for many years in Baltimore City. All through school his family thought of him as “artsy.” He didn’t label himself as gay, but even in college he knew that he was not interested in dating women. Although he never officially came out to his family, one of his uncles Googled him in 2005 and discovered that Steve was a contestant for the International Mr. Leather Contest. The response he got from his family was: “Good for you!” Steve is happy to say the he paved the way for his cousin’s kids who came out as gay.

Like many men in Baltimore in the 1980s, he discovered the leather community when he walked into the Gallery One bar on Maryland Avenue. Although it is still there today, at that time it was a dress code leather bar. He confessed that he had met a man on “the block” (a part of Baltimore known for adult bookstores and strip clubs) who told him about the Gallery. There he discovered the leather community and found a crowd that would accept him. He soon joined a Monday night gay men’s group. In the group he met a man who was a member of the Spartans MC (motorcycle club) who taught him that there were gay leather clubs. When the Baltimore Eagle opened in 1991, Steve bought his first pair of leather chaps there and became more involved in the leather community

By 2000 people started asking him to run for a leather title. Having dyslexia, he wasn’t sure if he was ready. Plus, he did not own very much leather beyond that pair of chaps. In 2002 he traveled to Chicago to attend the International Mr. Leather Contest (IML) and to get a feel for what it was all about. The Mr. Maryland Leather 2003 Contest was held in February and not the traditional November. It ended up being held during a big snowstorm and was not a financial success. Steve hoped to run in 2004, but the Mr. Maryland Leather Contest was not held that year. He ran for Mr. Maryland Leather 2005 and was thrilled to have been selected. In a nod to his proud Scottish heritage, he wore a kilt on stage. Although many leather titleholders now wear kilts, it was not looked on kindly by many leather folks at that time. He was advised to not wear a kilt in Chicago when he competed at IML and he didn’t. He regrets not being true to himself at IML. Although he had attended IML before, he was not prepared for how intense it was behind the scenes as a contestant. He put what he learned to good use years later when he mentored other Mr. Maryland Leather contestants at IML.

When asked what advice he would have for someone who wants to run for a leather title, he quickly stated, “Work on your resumé. Make sure it reflects some community service and is professionally written. The application is the judge’s first impression of the contestant. Make a good first impression.”

During his 2005 title year, he was also made a member of the COMMAND MC leather club and was later elected vice president. When the club’s president resigned, he became president. As president he presided over three successful big events: the club’s anniversary dinner (which was attended by three IML judges), the club’s Maryland Leather Weekend, and the first ever Leather Ball – a dance at the Club Hippo.

During Steve’s Mr. Maryland title year, COMMAND MC decided to have a new sash made. The sash that was presented to Steve on stage was huge. In fact, it was two sashes chained together. The first wide sash read “Mr. Maryland” and the second sash read “Leather.” It was so large that it wrapped around even Steve’s large chest. At the large formal leather cocktail party during Mid-Atlantic Leather Weekend in DC someone came up to Steve and asked if he was Mr. Mary Leather (the “land” was wrapped behind him.) Vern wrote in his leather column that “Mr. Maryland Leather’s sash is so big that he is looking for a bigger suitcase to take it to Chicago!” Steve resolved the problem and designed the beautiful Mr. Maryland Leather stole that the winner wears today. The stole design, which goes around the shoulders, was a change from the traditional leather sash the hangs across the wearer’s chest. Many new contest producers have now adopted the stole design. They are easier to wear and photograph beautifully. (Steve retired the large sash. The last time I saw it, he had it hanging in his basement like a sling.) When Steve wore the Mr. Maryland Leather stole for the first time at American Brotherhood Weekend (ABW), he made sure Vern was the first one to see it. He approved.

When asked about the high point and low point of his leather title year, Steve had no trouble with his answers. During his contestant interview, one of the judges asked him to do something which he refused three times. After the contest, contestants are given their judge’s score sheets complete with comments. One judge wrote: “You need to get over your disability and get a life!” Steve’s first thought was: “Why is my disability more of a problem for you than it is for me.” This rude comment gave him a backbone which made him work even harder. Towards the end of his title year he was approached by a newly sashed female leather titleholder. She beamed and told Steve that she had dyslexia also. He had inspired her to run for a leather title. In that moment his title year was all worthwhile.