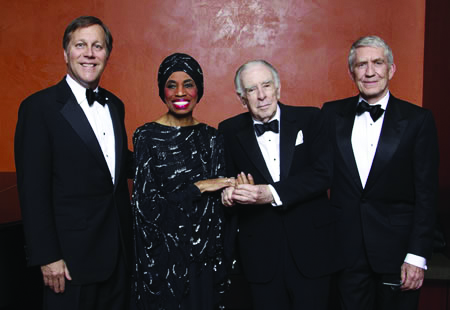 The Annapolis Opera presents Carlisle Floyd’s tragic American opera, Susannah, on Friday, March 13th at 7:30 pm and Sunday, March 15th at 3 pm. Based on the biblical story “Susannah and the Elders,” the 1954 opera is set in rural Tennessee and is rich with Appalachian folk melodies. Its plot centers around a beautiful and virtuous 18-year-old girl who has inadvertently incited the lust of her church elders, who accuse her of being a seductress and turn the entire town against her. When the new pastor, Reverend Blitch, urges her to repent her alleged sins, she refuses, inflaming the reverend’s own desires – with disastrous consequences. While the opera clearly connects to the McCarthy era in which it was written, its themes of men in power behaving badly and rumors trumping facts are as relevant as ever.

Adding to its importance, the production will be the last for retiring Artistic Director Ronald Gretz, and Stage Director Braxton Peters, who have served the company for 37 and 27 years, respectively. “We are extremely excited to bring Susannah to the stage as it is the most-performed American opera second only to Porgy and Bess,” said Kathy Swekel, the opera’s general director. “We believe that the Opera Insight Series leading up to the performances will allow audience members to gain a deeper look into this uniquely American work and understand why it is still relevant to us today. Because of these timely themes, it’s especially apt to present this opera during both Women’s History Month and Maryland’s declared ‘Year of the Woman.’”

The performances will take place at the Maryland Hall for the Creative Arts, (801 Chase Street, Annapolis). For more info, visit Annapolisopera.org/susannah.