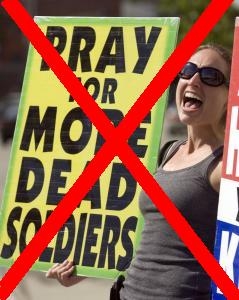 If this article makes absolutely no sense to you then I pray that when you are finished reading you pass it on to someone else to figure out and keep passing it on until someone understands it.  Maybe that person will be able to explain to me exactly what it is I’m trying to say because for the first time in my life I am truly at a loss of words.

Some of the things that have been said to me while working in retail make the signs the WBC uses look like Hallmark cards.

It makes no sense and yet is perfectly logical that the Supreme Court ruled, in an 8-1 verdict, in favor of the Westboro Baptist Church’s appeal.  The basis of the verdict is under the first amendment right of freedom to speech and protest.  In her biography of Voltaire, Evelyn Hall summarized Voltaire’s ideals of free speech stating,  “I disapprove of what you say, but I will defend, to the death, your right to say it.”

I cannot say that I completely agree with that sentiment I can say that it helps me to understand the Supreme Court’s ruling.  Unfortunately it does not help me understand exactly how we’ve allowed this country to get to this place.  I believe we’ve become complacent with the direction our moral standards are heading in.  In their place we’ve concerned ourselves with petty causes, stupid vices and money.

It makes no sense that the WBC is allowed to conduct themselves in a manner with no censorship or compassion for their fellow man.  However, for those of us who work in a customer service-related field we must censor ourselves each day to avoid unemployment and maintain our scrap of a paycheck.  If you’ve ever worked retail then you know that the general public is straight up rude.  Some of the things that have been said to me make the signs the WBC uses look like Hallmark cards.

Why are we trained to “coddle” the customer?  For money.  As long as someone is buying it doesn’t matter to corporate that you’ve had your dignity handed back to you completely shredded and dissolved.  So what does this do to our nation?  It creates a culture that negates compassion and glorifies self-indulgence.  Who cares if you just made someone cry, you got what you wanted and that’s all that matters.  Right?

The American story no longer reads like a fairytale but rather has become an instruction manual, complete with diagrams and keys, on how to out-do, out-buy, out-live, out-sell even out-eat your fellow man.  Of course, if you’re like me then you are questioning what language the script is written in and have probably been on hold with the support line for well over an hour.

I am appalled that some punishment is not being inflicted on the WBC.  While I understand that they were within their legal rights as American citizens I don’t understand where we draw the line between what is legally right and morally wrong.  Our family, friends, neighbors and peers are allowed to die fighting for our country but we can’t even offer them the dignity of a respectful funeral service.

It makes no sense!

I know I am not the only one upset by this action.  If the WBC is allowed to preach hate than why aren’t we out there preaching love?  It’s not enough to roll your eyes and say, “Oh geeze America, come on get it right,” then flip the channel to Jersey Shore.  It takes action.  We have to acknowledge the struggles and victories of those around us.  As well, we have to take personal responsibility for the demoralization of our country.  We have allowed it to become such a dark place.  Something has got to give, and I hope that this verdict has caused enough of a rift to wake us up.