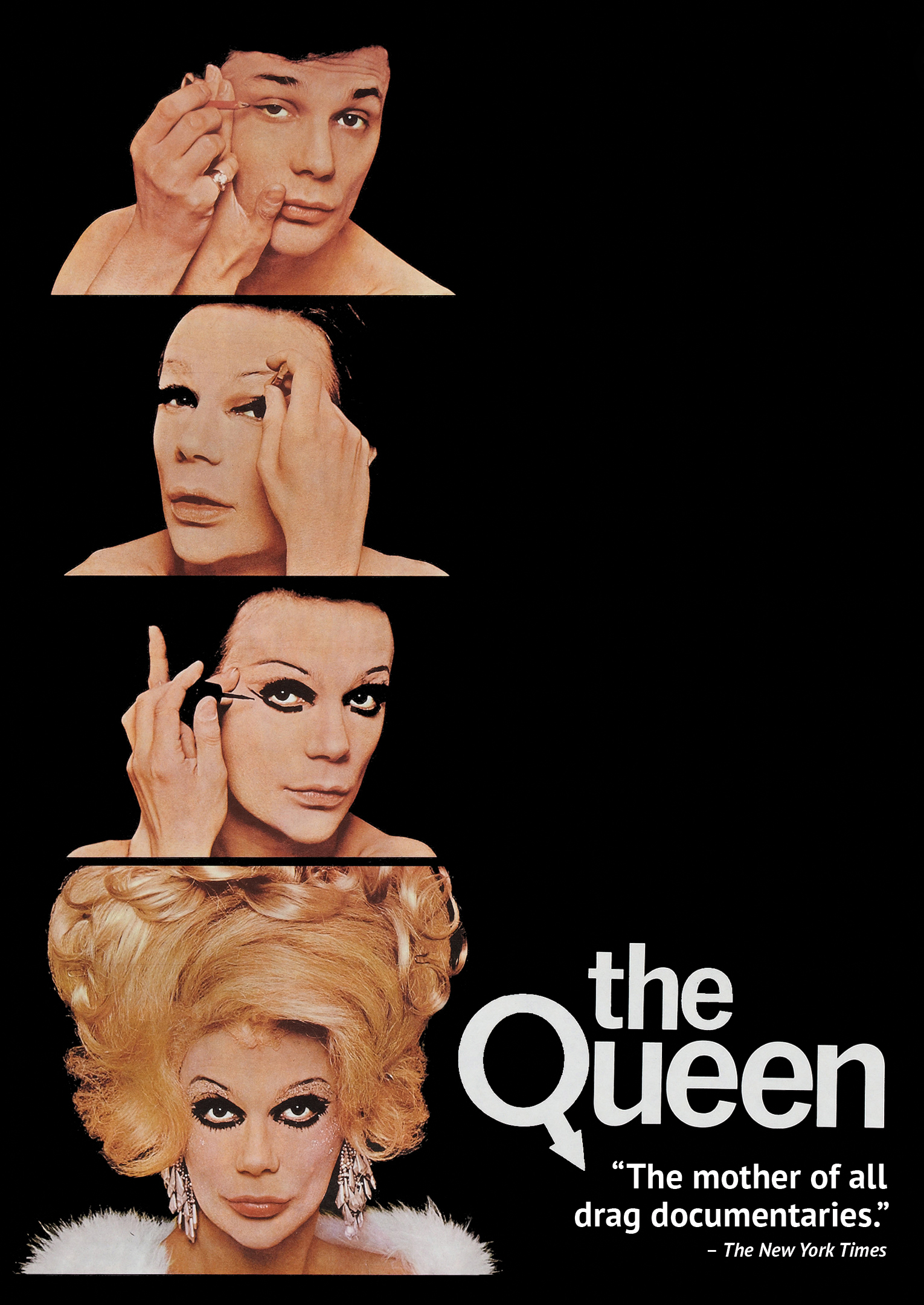 It may be hard to believe today, but laws known as Masquerade Laws — some dating back to 1845 — declared it a crime to have your ‘face painted, discolored, covered, or concealed, or [be] otherwise disguised… [while] in a road or public highway.’ This was typically aimed at farmers who would dress up like Native Americans to fight off tax collectors, but as fear and panic over LGBTQ people increased in the early 20th century, these laws were applied to people dressing up in clothing of the opposite gender, even though the Masquerade Laws never specifically mentioned the type of dress that was illegal. It simply became a handy way to criminalize cross dressing at a time when homosexuality was already illegal (and considered a mental health issue). It took the Stonewall riot in 1969 to make arrests of drag queens and kings become a thing of the past. Which is why a film like The Queen is so remarkable as it was filmed in 1967 and released in 1968, pre-dating Paris Is Burning and RuPaul’s Drag Race by several decades.

The Queen is a visual document of The Miss All-American Camp Beauty Pageant, which was dubbed on the show’s flyer a ‘A Satirical Happening’. Spearheaded by Jack Doroshow / Flawless Sabrina, the event was similar to a typical Miss America pageant except all of the contestant were men in drag. That such an event could take place in 1967 is incredible, but the fact that it was held at a large venue in New York City called Town Hall to a packed audience is all the more incredible. Judges for the pageant included screenwriter Terry Southern (Dr. Strangelove, Easy Rider), lyricist Jerry Leiber (of Leiber & Stoller fame) and artists Jim Dine and Andy Warhol. The film’s main focus is on Doroshow and company getting the contestants together and rehearsing the various group numbers, and it also takes a look at the contestants as they gather together in their hotel rooms counting down to the big night (and the challenge of finding a hotel with enough rooms that would allow the men to stay there was another challenge). It’s interesting to note many of the conversations are about the military draft and how the men were excused from duty for being gay. One says he was escorted out of the draft office and replied with a ‘thank you very much’.

While it’s all a very interesting look at a bygone era, where the film generates its drama comes in the form of a contestant from Philadelphia named Harlow. Harlow comes off as a young diva who pitches a fit when a wig goes missing, and it’s explained that while all the other contestants have had to work their way up to the top, Harlow entered her first pageant and won so now she’s pulling a diva attitude. The film also generates some heat from a disgruntled finalist, Crystal LaBeija, one of the founders of the New York City Ballroom scene, who lets out an epic read on Flawless Sabrina, the judges and the winning queen, claiming the fix was in. That the film all just happened to lead up to this moment really makes it worth watching. While Sabrina suggested Crystal address the judges at the after-party while affirming she had no idea who most of the judges were or had even talked to them beforehand, that footage is not included in the documentary itself. Still, like Paris Is Burning, The Queen is a valuable document of an era of repression and danger that many take for granted today.

Kino Lorber’s Blu-ray is derived from a brand new 4K restoration of the film produced by Bret Wood from materials preserved at the Harry Ransom Center at the University of Texas at Austin with assistance from the UCLA Film & Television Archive and Outfest UCLA Legacy Project. Considering the age of the film and the budget at the time (and the film actually went over budget due to music rights), it looks probably as good as it ever has. Because of the probably inexpensive film stock, there is a moderate film grain pattern to the image that some who expect sharp, clear 4K video may object to. It’s film, so it’s supposed to have grain. It’s not an issue. Where real objections may arise are at the fault of the filmmakers not keeping the camera in focus at all times so some scenes are a little blurry but that is no fault of the video presentation on the Blu-ray. The sound is what it is, also no fault of the Blu-ray presentation but while it may not be reference quality, it is clear and well-balanced. Considering the original condition of the material, there is nothing to complain about with the Blu-ray presentation.

The Queen is packed with bonus features that make this Blu-ray even more desirable. In addition to silent footage of the after-party (and Crystal apparently did not make an appearance to read the judges), there is an audio commentary by artist and producer Zackary Drucker (Transparent) and author Diane Tourjée, a featurette with Doroshow watching the outtake footage for the very first time (before his death in 2017), an interview with producer Si Litvinoff, a featurette on Flawless Sabrina, and the short film Irma Vep: The Last Breath starring Drucker and Flawless Sabrina. Most interesting is the short film Queens at Heart. This is another remarkable document from 1967 featuring host Jay Martin interviewing four drag queens and asking them all kinds of very personal questions about everything from their jobs to their sex lives. Martin points out that at that moment, all four of his guest are breaking the law by dressing as women and ends the segment reminding everyone that homosexuality is a mental condition that needs psychological treatment (it would take another 20 years before homosexuality was no longer classified as a mental illness). Interestingly, all of the subjects Martin spoke with were undergoing treatment and hormone therapy for ‘sex change’ operations, whereas in The Queen when the subject comes up, none of the men in the contest had any desire to change their gender. This short film has been stunningly restored from faded film elements and often looks even better than the feature. The disk package also comes with an informative booklet essay by Joe E. Jeffreys.

June is designated as Pride Month across the US, and The Queen Blu-ray is a great item to add to your home video library as a piece of important LGBTQ history. With the restoration and the plethora of bonus material, Kino Lorber has done a great service to the LGBTQ community with this Blu-ray release.