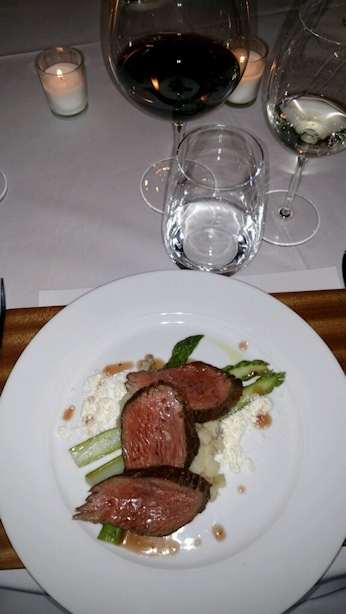 When Nick and I were invited to the Underground Kitchen launch in Baltimore earlier in the week, we had no idea what fun and adventure was in store. The Underground Kitchen is a secret supper club that hosts pop-up dinners in various locations. The idea originated in Richmond, Virginia, and later expanded into the Mid-Atlantic. On March 20th and 21st, the Underground Kitchen, the “ultra-luxe, super-secret, pop-up dining society featuring buzzed-about chefs, unconventional locations, and tickets that routinely sell out within minutes” came to Baltimore.

Dinners are based on themes in keeping with the season or the chef’s culinary direction. Our theme was “Spring Fling” and the dinner was held at the 1840s ballroom located in Baltimore’s 1840 Plaza, home of the historic Carrolton Inn. What a fantastic setting for such a phenomenal meal! As we walked into the dining hall, we were personally greeted by staffers of the inn and Underground Kitchen, and offered our first of many glasses of wine. The idea of Underground Kitchen is to meet new people. The reception provided us an opportunity to get to know others before sitting down to dine.

There were no more than 25 attendees at our dinner, so three tables were set. We were fortunate to have with us some of the management from the inn, Jakob (from Czech Republic), and two self-proclaimed millennials . At our table, we each had a menu card describing what was planned for the evening. Each course was accompanied by a different wine.

Before the palate cleaner was served, our host presented the chef, a young culinary genius named Timothy. Timothy explained the science of the palate cleanser, which is described as Butterly Tea “Snow.” By squeezing fresh lemon juice into the glass and stirring for a minute, the “Snow” changed color from yellowish to a purply-raspberry color. Once completed, a guzzle or two of snow served its purpose, and it was time to move on to the fourth course, a Chilled Mint Pea Soup with herb salad, served with Alain Corcia Bourgogne Reserve Grade Classe. The final and fifth course was Lamb jus with herb biscotti, served with Borges Porto Tawny Port. Timothy explained the dinner theme of spring being, “In like a lion, out like a lamb.” All courses were spectacular. Between courses, we got to know our table-mates, and found some wonderful new friends.

After dinner had completed, we were provided a tour of the plaza and the inn. We visited one of the rooms, and as advertised, each elegant guest room captures a theme from the life of Charles Carroll of Carrollton. There are a variety of suites and luxury rooms available, featuring whirlpool tubs and fireplaces. Guests are able to enjoy the tranquility of the charming garden courtyard or a night on the town. The inn is just one block from Little Italy, and nearby the Inner Harbor.

Each quarter, Underground Kitchen partners with a nonprofit to donate partial proceeds from the events. The Underground Kitchen gives members access to a one-night only, five-to-seven course pop-up dinner in an undisclosed location with a top chef. A limited number of people get a ticket, but everyone can register to receive the invitation to purchase tickets. Our event was priced at $150 per person. In the invitation to purchase tickets that is sent out a few days before the event, three pieces of information are revealed: the date of the dinner, the date and time when tickets become available for purchase, and a clue about the location of the event. The location is kept secret until a few days before the event. Tickets are all-inclusive (meal, wine, and gratuity), and prices do vary per event.

To learn more about 1840s Carrollton Plaza and Inn, please visit 1840sPlaza.com. For the Underground Kitchen, tickets for upcoming dinners can be found by visiting this link: Theundergroundkitchen.org/foodie-reigstration. For those who enjoy fine food and wine and wonderful surprises, I highly recommend the experience. I was reminded of the many meals I had experienced while living in Europe where dinner was an event to be shared with enjoyable conversation and plenty of wine to go around. For a Monday evening, we had a tremendous adventure!