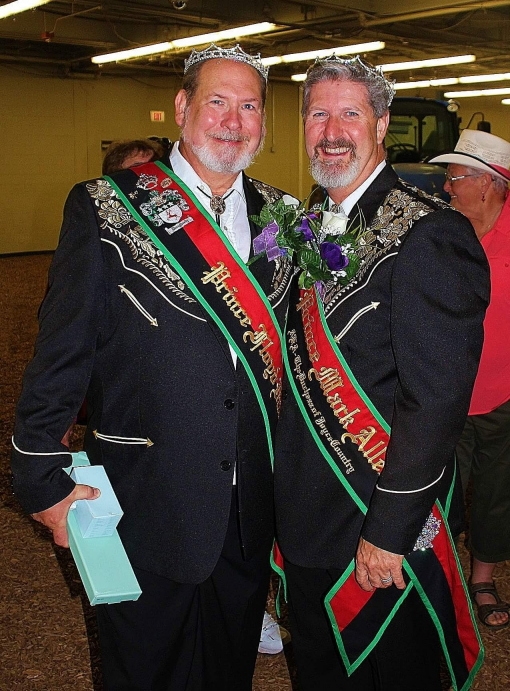 Once upon a not-so-very long time ago, in the arena of the Inaugural Keystone State Gay Rodeo, two cowboys declared their love for each other. As the glittering assemblage of cowboys, cowgirls, and rodeo royalty looked on, the wedding of Floyd and Mark Zwiers was celebrated with thunderous applause. Chatting exclusively with Baltimore OUTloud, both Floyd and Mark reflected on how they met, their ties to the Keystone State Gay Rodeo (KSGRA) and their recent June nuptials.

“Originally, I’m from Michigan, but I’ve been involved with gay rodeo since 1992,” Floyd explained. “Back around 2008-2009 there was another organization in Pennsylvania named Liberty Gay Rodeo Association (LGRA). After that folded in 2010, I eventually talked with Adam [Romanik, KSGRA president] and became involved when he first started the KSGRA a few years ago.”

Mark added, “In 2006, I went to my first gay rodeo. It was for ASGRA, the Atlantic States Gay Rodeo Association, which was held in DC / Maryland area. I stated that the following year I was going to compete in just one event, Goat Dressing. I went out in Philadelphia and met a woman by the name of Jen Vrana. She literally ‘roped’ me into the rodeo events. She was the founding president of the now defunct LGRA. She invited me out to a ‘rodeo school’ where we learned about the events and she even let me ride her horse Quinn. In September of 2007, I competed in seven events. I walked away that weekend with five ribbons and from that time on I was hooked.”

It was through those rodeos that Floyd and Mark first met. “The first time I met Floyd was at the LGRA Liberty Stampede, its inaugural rodeo in Philadelphia. The next time we met was at the MIGRA Windy City Rodeo in greater Detroit, and then in Chicago at the ILGRA Great Lakes Regional Rodeo a week later,” he explains. “The ILGRA rodeo was where I got to see his ‘bad’ side.”

Floyd chimed in. “In Illinois, there is a food law that states that when you’re serving food, in a food tent, you have to take the meat off the grill on the bun and then wrap it in the warmer. I opened up a new container of hamburgers from the warmer and not one was wrapped and I said ‘What idiot did this?’” Floyd laughed. “Mark was there with his food tickets and I turned around and said ‘Hey, how can I help you?’ and he thought that I was a jerk because I could go from a tyrant to very friendly.” Mark added, “After he blew up at the person and called them a stupid idiot, he promptly turned around and said ‘Oh, hi, what can I get for you?’. Needless to say, my opinion of him has changed over the years but I did not like him at that time.”

As the years went on, Floyd and Mark’s relationship flourished and they eventually decided to get married. “When we discussed where we would have the wedding, we first decided to have it in Arizona. But nothing became of that, and then we were talking about where to have the wedding and Jim Gallucci [KSGRA rodeo director] came to us and said, ‘Why don’t you get married at the [inaugural KSGRA] rodeo?’ The idea sort of grew from there.”

“Floyd and I worked very hard on making it what it was,” Mark explains. “The main reason we got married there was because we love the Country-Western lifestyle and rodeos in general. We had talked about that since we met at a rodeo how neat it would be to get married at a rodeo. We knew of many others in the greater International Gay Rodeo Association that also married at a rodeo in the arena. So, that is why we chose to do it at our rodeo.”

“It was absolutely fantastic,” Floyd says, reflecting on the ceremony. Mark added, “Being in the ‘rodeo circuit’ we had may friends and ‘chosen’ family members who were not able to attend. So, it was a little sad but also wonderful to celebrate with those friends and family who mean the most to us. Those who were there were meant to be there and those who weren’t – we missed them.”

The excitement of the wedding itself was equally matched when a royal coronation took place during the ceremony. “I was born a Prince of Ireland. Specifically a Prince of Joyce County of Ireland,” Floyd notes. “Back when my family was in power in Ireland, where the king and queens come from, my mother was Princess Agnes Annora Dougherty – that’s the Irish connection. Because my mother was a princess, I was born Prince Floyd Vincent. My mother was born in Ireland, and my grandparents came here in 1931. Her father was Prince Claude Zachary.”

The “royal” treatment was something that touched Mark. “I was overjoyed that the Irish royal family were so welcoming and wanted this for Floyd and myself! I am honored to be part of something that is greater than I can ever begin to imagine. I look forward to going to Ireland and meeting the king, queen, and princess in December of this year.”

Here’s to these two Country-Western Princes as they embark into the sunset together to celebrate their happily ever after.