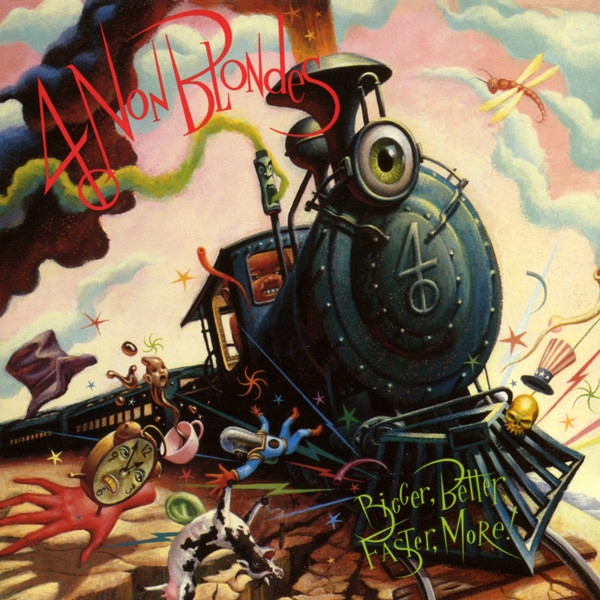 This winter of 2017/2018, whether you’re all bundled up and trudging through snow and ice or wearing board shorts and soaking up the sun at the beach or pool, remember that music makes everything better.

Before Linda Perry became the Grammy Award-winning hit songwriter/record producer and wife of Sara Gilbert, she was the dreadlocked lead singer of the blues-rocking band 4 Non Blondes. There’s not much on 4 Non Blondes’ 1992 debut album Bigger, Better, Faster, More (Interscope / UMe), newly reissued on 180-gram vinyl, to indicate that Perry was capable of writing hits such as “Beautiful” and “Get the Party Started” for Christina Aguilera and P!nk, respectively. In fact, the album’s lone massive hit single, “What’s Up,” qualified 4 Non Blondes for one-hit-wonder status. “Dear Mr. President,” another of the Perry-penned tunes on the album, is the other highlight.

Now in his seventh decade as a recording artist, the remarkable 82-year-old Johnny Mathis returns with The Great New American Songbook (Columbia). Throughout his career, Mathis gained a reputation for being a top-notch interpreter of other people’s songs. Co-produced by Clive Davis and Babyface, the disc features Mathis’ singular renditions of Leonard Cohen’s “Hallelujah,” A Great Big World’s “Say Something,” Adele’s “Hello,” Pharrell’s “Happy,” and the Josh Groban hit “You Raise Me Up,” to mention a few.

With her new Cuban-spiced album An American in Havana (Susanwerner.com), singer / songwriter Susan Werner proves once again that there aren’t any musical genres she’s unable to master. Having established herself in the folk world, Werner turned her attention cabaret/ jazz on I Can’t Be New, modern liberal spirituality on The Gospel Truth, contemporary classical on Classics and country on Kicking the Beehive and Hayseed. “1955 Chevy Bel Air” brings all of her songwriting chops, including her ability to pen marvelous lyrics, to the fore. “Havana Moon” is swoon-worthy, “Cortadito” puts her fantastic sense of humor on display and “Stray Dogs” invites listeners to salsa to their heart’s content.

Since the release of their respective 2015 albums, the second for Torres and the first for Julien Baker, both artists have undergone musical transformations on their follow-up discs. On Three Futures (4AD), Torres (aka Mackenzie Scott) comes across like the kid sister of St. Vincent and Mitski. Sure, there were hints on Sprinter, including the song “Cowboy Guilt.” But metamorphosis is complete for Torres on Three Futures, as is obvious on songs including the title track, “Tongue Slap Your Brains Out,” “Helen in the Woods,” “Greener Stretch,” “Concrete Ganesha,” “Bad Baby Pie,” and the near-epic electronic “To be Given a Body.” There is an additional accessibility to Torres’ music on a song such as “Righteous Woman.”

Whereas Baker’s Sprained Ankle was a mostly acoustic guitar and vocal affair, Turn Out the Lights (Matador / 6131) is more sumptuous. Fleshed out with piano, strings, woodwinds and brass, and the guitars are plugged in, adding to the radiance of the music. Even Baker’s vocals have a luminescence.

If there’s any justice, Jeff Heiskell, former front-man of The Judybats, will get the recognition he has long deserved. The openly gay front-man of the aforementioned Tennessee-based band, a group that benefited from the popularity of the college rock and alternative music scenes, releasing four major-label albums, has been recording as Heiskell since putting out 2007’s Soundtrack for an Aneurism. The new Heiskell disc Emotional Terrorism (Heiskellmusic.com) is as haunting at the title and cover image suggest. That’s meant to be a compliment because unforgettable songs such as “I Want More Life,” “Abandoned Property,” and “Like We Used To.”

Benefiting the Tegan and Sara Foundation, whose mission is “fighting for economic justice, health and representation for LGBTQ girls and women,” the various artists The Con X: Covers (Vapor / Warner Brothers) features an all-star cast of artists commemorating the tenth anniversary of Tegan and Sara’s 2007 album The Con. As is often the case with covers/tribute albums, The Con X: Covers is a little uneven, but less so than others of its ilk. First and foremost, there is healthy representation by LGBTQ artists including MUNA (“Relief Next to Me”), Mykki Blanco (“Knife Going In”) and Shamir (“Like O, Like H”). There are also delightful surprises including performances by Ryan Adams (“Back in Your Head”), City and Colour (“Hop A Plane”), Sara Bareilles (“Floorplan”), and devout Christian artist Hayley Williams of Paramore (“Nineteen”).

A pair of bisexual divas have new albums. The new and improved Miley Cyrus, freed from the bonds of Disney and its affiliate Hollywood Records label, defied the odds and emerged as a respectable (if slightly off-kilter) artist on 2013’s Bangerz. Four years later, Cyrus returns with Younger Now (RCA), her most mature and assured effort to date. Just listen to the powerful “Inspired” as proof. “She’s Not Him” sounds like Joanne-era Lady Gaga, while Cyrus dares to venture into indie-pop territory on the title cut and “I Would Die For You.”

Halsey doesn’t completely abandon the electro-pop style that helped to establish her popularity on her second album Hopeless Fountain Kingdom (Astralwerks). However, she definitely sounds like she’s determined to expand her musical palette on songs including “Devil In Me,” “Sorry,” “Lie,” and “Angel On Fire.”

UK-based lesbian singer/songwriter Susie Wilkins rocks like nobody’s business on her new four-track EP She Got Me Good (Susiewilkins.com). Titular opener kicks things off on a blistering note and “Fall To Pieces” lightens up the rock level. “Far Away” adds a gospel choir to the proceedings to get its message across.