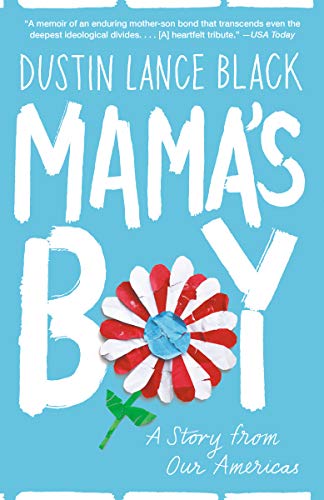 In 1988, shortly before his death, disco legend Sylvester did an interview in which he talked about working with legendary record producer Tommy LiPuma. That record never came to be, but LiPuma did work with countless other music icons including  Barbra Streisand, Randy Newman, Patti Austin, Jennifer Holliday, Diana Krall, Brenda Russell and Paul McCartney and you can read all about LiPuma in The Ballad of Tommy LiPuma (Nardis, 2020) by Ben Sidran.

Now available in paperback, Mama’s Boy: A Story from Our America (Vintage, 2019/2020) is the memoir by Dustin Lance Black, the Oscar-winning screenwriter of Milk, who turns his pen to his mother and himself, writing about his conservative religious upbringing (Mormon) and his relationship with his mother, a childhood polio survivor, and how she came around to acceptance after meeting his friends.

Dedicated to the late writer Leslie Feinberg, Female Husbands: A Trans History (Cambridge University Press, 2020) by Jen Manion, Associate Professor of History at Amherst College in Massachusetts, is a thoroughly researched historical survey, covering the span of 1740-1910, in the UK and US, on the subject of people assigned the female gender at birth, who went on to live lives as men and marry women.

“This book is about the fight for queer rights” is one of the first things readers of all ages will encounter (right after the table of contents) in Rainbow Revolutions: Power, Pride, and Protest in the Fight for Queer Rights (Crocodile Books, 2020) by Jamie Lawson and Eve Lloyd Knight, which features informative chapters on “The New York Ballroom Scene”, pride flag creator Gilbert Baker, “The Pink Triangle”, “The Stonewall Riots”, “Act Up”, “Trans Struggles; Trans Rights” and more.

Completed shortly before his death in 2019, Great Demon Kings: A Memoir of Poetry, Sex, Art, Death, and Enlightenment (Farrar, Straus and Giroux, 2020) by performance poet John Giorno, is every bit as dishy and daring as you might expect as he details his dalliances with Andy Warhol, Jasper Johns and Robert Rauschenberg, while exploring the “intersection of literature and technology” with  Williams S. Burroughs, Laurie Anderson and others.

Musician Kathy Valentine, best-known as the bassist for illustrious all-girl band the Go-Go’s and co-songwriter of hits such as “Head Over Heels” and “Vacation”, has written a memoir – All I Ever Wanted: A Rock ‘n’ Roll Memoir (University of Texas Press/Austin, 2020), a juicy tell-all with a happy ending.

It may be quite some time before we are able to return to the theater to see a play but you can always read one (or two) if you are experiencing symptoms of withdrawal. Take Two Plays: The Snow Queen and November Door (Hosta Press, 2020) by gay novelist David Pratt, for example. The linked plays (November Door is the sequel to The Snow Queen) fit well together under one cover.

If you have been patiently awaiting the follow-up to gay writer Lysley Tenorio’s brilliant 2012 short story collection Monstress, your perseverance is being rewarded with the publication of his debut novel The Son of Good Fortune (Ecco, 2020) in which the main character Excel, an undocumented Filipino teen, must call upon his resourcefulness to maneuver through his relationships with his mother Maxima and his girlfriend Sab.

Living literary legend Edmund White, one of the original members of the illustrious gay male writers’ group known as The Violet Quill, returns with his 29th (!) book, the novel A Saint from Texas (Bloomsbury, 2020) follows Texas twin sisters Yvette and Yvonne, beyond the borders of the Lone Star State, from the 1950s to the not too distant past.

Lisa Alther, author of the popular and daring queer 1976 novel Kinflicks, is back with her 12th book, a novel titled Swan Song: An Odyssey (Knopf, 2020), in which Dr. Jessie Drake, still recovering from the unexpected deaths of her parents, as well as her longtime partner Kat, takes a job on a cruise ship and all sorts of  crazy situations arise.

Set in the turbulent late 1960s, Vera Kelly is not a Mystery (Tin House Books, 2020) is the second installment in Rosalie Knecht’s series about the titular ex-CIA agent, struggling to move on following the loss of her girlfriend by taking a case to get her mind off her troubles that may provide her with more action than she bargained for.

Camp Outland, a summer camp for queer teens, is the setting for Camp (Little, Brown, 2020) by gay Y/A novelist L.C. Rosen, where Randy, age 16, finds himself willing to make changes to his personality and appearance all in an effort to capture the attention of his crush Hudson, but ultimately leads him to questioning the things we do for love.

The Gold Rush Girls (Vivid Imagery, 2020) is the fourth novel by South Florida-based writer Craig Moody. Set in the mid-1800s, the novel tells the tale of orphaned, teenaged housemaid Meredith who marries Southerner Jeremy and joins him on what she thinks will be a golden opportunity for them only to discover the depths of his betrayal forcing her into the fight of her young life.