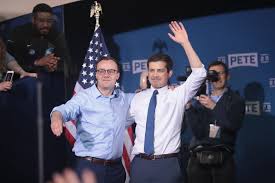 Charlotte, North Carolina – We need to talk about the mayor. No, I don’t mean Mayor Bill de Blasio of New York City. Or the obscurely known Mayor Wayne Messam of Miramar, Florida. I’m referring to openly gay Mayor Pete Buttegieg of South Bend, India.an Despite his recent slip in the polls, he has still managed to firmly ensconce himself in the top-tier of 2020 Democratic candidates. Because of his status in the race, it’s time that we, the LGBTQ community, start seriously considering whether or not we want to throw our weight behind the first openly LGBTQ candidate that has made a viable bid for the White House.

There are a lot of considerations. Sure, he’s a perfectly brilliant politician. I have no doubt that his heart is in the right place, but that doesn’t mean that we should support him just because we’re starved for elected leaders who reflect our sexual and gender diversity. We need to be just as strategic about backing candidates as the religious right has been. The African-American community went through a similar inflection point during the 2008 campaign. Originally, African-Americans largely supported Hillary Clinton because she was viewed as being more electable. Support started to shift once it became apparent that now former President Barack Obama had staying power.

Whether he wants to or not, Buttegieg represents the LGBTQ community. A large portion of Americans still don’t personally know anyone who isn’t heterosexual or cisgender. For that reason, we should consider whether we want Buttegieg to represent us. Based on his record, I have to say that he’s given us a lot to be proud of. Despite Buttegieg’s LGBTQ bona fides, other candidates can boast that they have equally impressive track records when it comes to the issues that impact us. Sen. Bernie Sanders, Sens. Elizabeth Warren and Kamala Harris, former Vice President Joe Biden came out in support of same-sex marriage in 2012, while Buttegieg was still closeted and was even credited with persuading Obama to do the same. Don’t get me wrong, I would love nothing more than to say that our country is being led by an openly gay man. However we need a candidate who can beat President Donald Trump. I certainly don’t have all of the answers about whether the LGBTQ community should get behind Buttegieg or not. [W]e aren’t single-issue voters. We’re pragmatic and are invested in a wide range of policy matters, which is something we should take pride in. t (Q Notes Online – adapted from article by Aila Alvina Boyd at Goqnotes.com/63770/being-clear-eyed-about-mayor-pete)