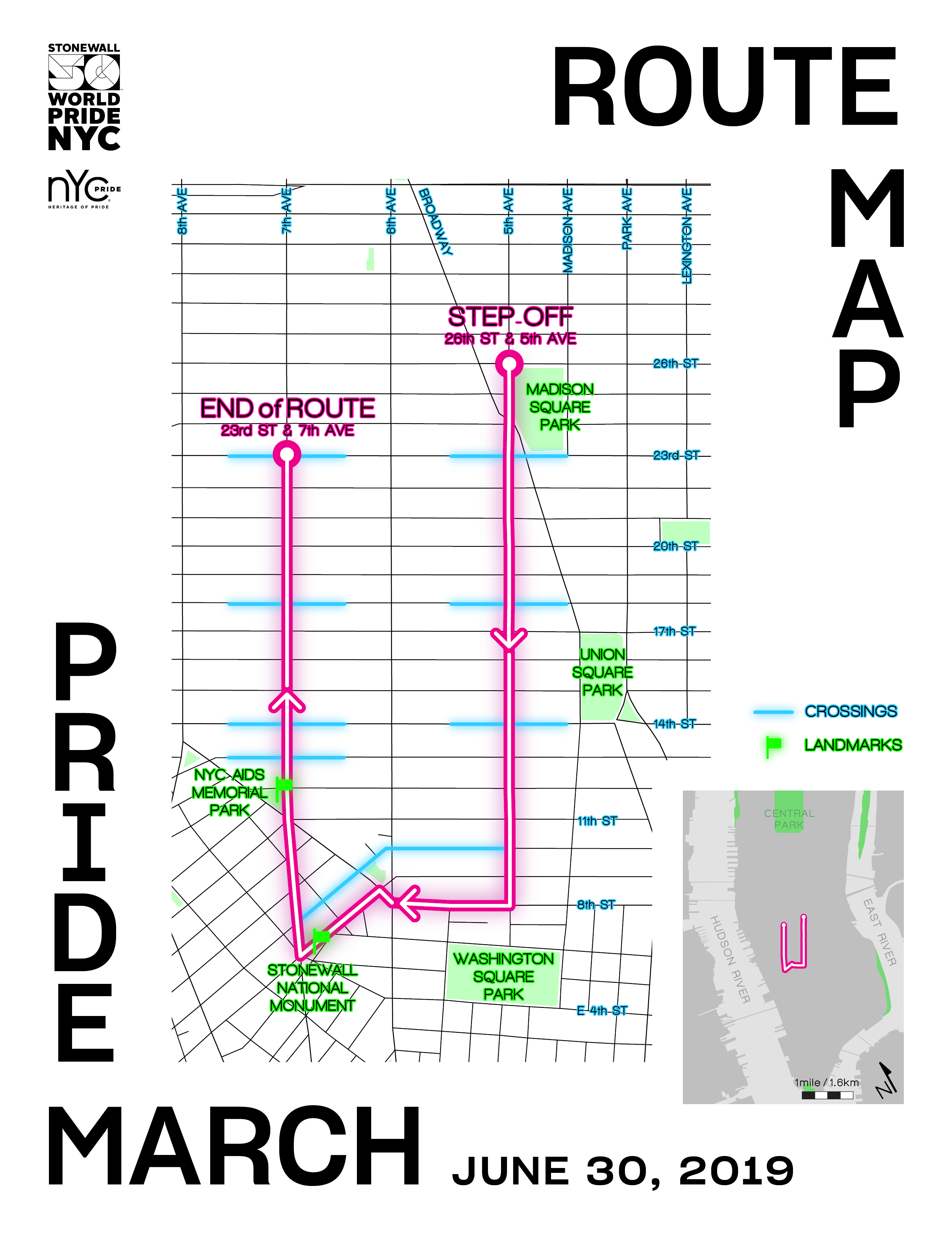 The 2019 Pride March, which commemorates the 50th Anniversary of the 1969 Stonewall Uprising, will step off at noon on Sunday, June 30th from 26th Street and 5th Avenue. Some 150,000 marchers will proceed south on 5th Avenue before heading west on 8th Street. After crossing over 6th Avenue, the March will continue on Christopher Street, passing the site designated in 2016 by President Barack Obama as the Stonewall National Monument. It will then turn north on 7th Avenue, passing the New York City AIDS Memorial, before dispersing in Chelsea just north of 23rd Street and 7th Avenue.

“As we commemorate the 50th Anniversary of the Stonewall Uprising, it is fitting that we will march down Fifth Avenue, past the Stonewall Inn and through the neighborhoods of Greenwich Village and Chelsea, cradles of the modern LGBTQ civil rights movement. I want to thank Mayor de Blasio, the NYPD, NYC Pride and all their partners for their hard work in planning WorldPride NYC 2019, a tremendous logistical feat,” said NYC Council Speaker Corey Johnson.

“New York City stands ready to welcome people from around the world to celebrate the 50th anniversary of the Stonewall riots and the significant role our city played in advancing equality and justice for all,” said Mayor Bill de Blasio. “I commend NYC Pride, the NYPD, and City Council Speaker Corey Johnson for working together with my office to determine a Pride March route that provides for a safe, affirming, and meaningful experience to commemorate this historic milestone for the LGBTQ community.”

“NYC Pride is thrilled to welcome millions of LGBTQIA+ people from around the globe for World Pride as we commemorate the 50th anniversary of the historic Stonewall Uprising,” said Chris Frederick, head of NYC Pride, “From our opening ceremony in Brooklyn to the largest Pride march in history to the closing ceremony in iconic Times Square, it is clear that New York will embrace Pride like never before. We welcome everyone to experience a million moments of Pride and make history with us in 2019.” For more information about Heritage of Pride, WorldPride 2019 NYC, and Stonewall 50, including opportunities to volunteer, sponsor, or purchase tickets, visit Worldpride.org.