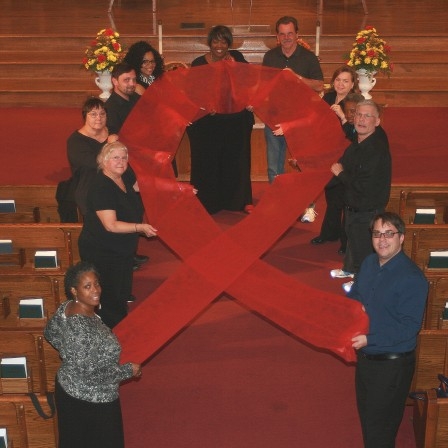 It’s hard to believe that we are in the 34th year of the HIV / AIDS epidemic and that this epidemic is still on target to become the deadliest epidemic in recorded history. It’s also hard to believe that I’ve had the privilege of working in this field for 12 years now. I went into nursing as a third career; I was in my 40s. When I started my nursing education, I fully intended to be a labor and delivery nurse, and then one day everything changed. It was early August of 1992; it was the day I learned that John had just died of AIDS.

John was my first boyfriend in high school, and the news of his death stunned me. I remember not being able to get my head around it. John had been such a tower of vitality with a personality that lit up any room he was in. Our high school was known for its gymnastics program, and John had been the star gymnast. He could fly what seemed like 30 feet into the air from his trampoline twisting, twirling, and somersaulting back down to jump and do it again. As his high school sweetheart, watching him had made me so proud, and even after we broke up, watching him perform never stopped thrilling me. I couldn’t believe he was gone. We were the same age, and while I was embarking on a new life—John’s life was now over.

That year, my junior year in college, I did all of my papers and projects on the HIV / AIDS epidemic. By the spring semester I had become the school’s expert on the subject, and my professors asked me to provide HIV / AIDS prevention education to all the students in the athletics programs. I was well on my way to becoming an HIV / AIDS nurse; I’ve never looked back.

I’ve had the privilege over the past 12 years of sharing the journeys of about 200 individuals living with HIV infection. Each year, I still give several individuals their positive diagnosis for the first time. In 2015, I am able to promise them that they will live a long and healthy life if they start and remain on treatment. I can promise them that there are relatively minor and short-lived side effects to the newer medication regimens available today. But I can’t promise them that HIV won’t change their lives. HIV is still a game-changer of the highest magnitude, ask anyone who has ever received that diagnosis.

While the prognosis for someone diagnosed with HIV infection in the U.S. is hopeful, the same is not true for those living with the infection in developing countries where only one in four people who need HIV treatment can get it, where hundreds of thousands of people still die of AIDS each and every year, and where hundreds of thousands of children are orphaned by AIDS each year. While HIV drug development has been a huge success story in helping people live with HIV, and with benefits that have also spilled over into drugs to successfully treat and cure other viruses, like hepatitis, we still await a cure for HIV, and we still battle to make a dent in the prevention of new HIV infections.

World AIDS Day remains as relevant as ever. We still have a long way to go; there’s still a lot of work to do. In light of this, I’m happy to announce the recent formation of an HIV / AIDS Coalition in Frederick, Maryland. It’s the only group of its kind in Western Maryland with members from various service organizations, public health officials, and local churches. The mission of the coalition will align with the goals of the National HIV / AIDS Strategy: To reduce the number of new infections, to increase access to high-quality care for people living with HIV and improve health outcomes, to decrease HIV-related health disparities, and to meet the spiritual and social needs of people living with HIV / AIDS. The coalition will be focused on ways to make a difference in our own little piece of the world. Won’t you do the same?

The coalition will be holding a World AIDS Day observance in Frederick on Tuesday, December 1st, at Dublin Roasters (1780 North Market Street, Frederick), at 7 p.m. The public is encouraged to attend. Those wishing to share a testimonial, poem, story, or song can contact me directly at 304-279-6261. Those wishing to know more about the Frederick HIV / AIDS Coalition can send an email to danne@frederickcountymd.gov.