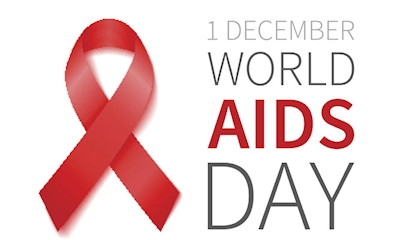 The first World AIDS Day was first designated for the first day of December in 1988, seven and a half years after the virus was first recognized.  It provides an important opportunity for people around the world to show their solidarity with people living with HIV, to commemorate the people who have died from HIV/AIDS, and to recommit to standing united in the fight against HIV.

“In the 1980’s, it seemed that in some ways the response to the crisis was a patchwork of organizations, often competing for turf in the struggle, with no comprehensive plan,” said Greg Satorie-Robinson, long-term HIV survivor, and former president of the People With HIV/AIDS Coalition of Baltimore.  “The observances of World AIDS Day reflected that, as individuals progressed from one event to another, adjourning and reconvening in a new location with many of the same faces and themes.  It was a marathon just to attempt to be present and represent in the many venues.  For many years however, we continued to collectively gather in the evening at Mount Vernon Place United Methodist Church.  In the 90’s we then trudged down the block to the Walters Art Gallery for a reception following.”

“My first World AIDS Day in Baltimore was in 1988 or 1989,” said Satorie-Robinson.  “I remember John Stuban the founder and president of ACT-UP Baltimore, standing in the sanctuary of the Mount Vernon Place United Methodist Church, calling out the governor and mayor for not doing enough.  The huge church was packed with hundreds of mourners, activists, family and friends, caregivers, some politicians and clergy, as well as many people with visible signs of late stage HIV/AIDS.  He called out everyone in the standing room only church, asking us “what are you doing to fight AIDS?”

“HIV/AIDS was a national health emergency and a personal tragedy for thousands of local people, infected people, lovers, parents, children and friends,” said Satorie-Robinson.  “The microphone was passed throughout the church so each person could speak the names of those they had lost, and as the names multiplied the minutes turned to hours.  There was not enough time to hold all our collective grief.”

World AIDS Day was the first ever global health day marked by the World Health Organization (WHO), now one of eight such days.

Two public information officers for the Global Programme on AIDS at the World Health Organization in Geneva, Switzerland, first conceived of the idea for World AIDS Day, planning the first observance for 1 December 1988.  December 1 was chosen, in hopes that the date would help maximize coverage of the observance by western news media, falling sufficiently long following the U.S. elections, but before the Christmas holidays.  The Joint United Nations Programme on HIV/AIDS (UNAIDS) was formed in 1996, and subsequently took over the planning and promotion of World AIDS Day.

Since 1995, the President of the United States has made an official proclamation on World AIDS Day each year.  In 2007, the White House began the annual tradition of displaying an iconic twenty-eight food high AIDS Awareness Ribbon on the building’s North Portico.  As the first banner, sign or symbol to hang prominently from the White House since the Abraham Lincoln administration, the ribbon gained fast recognition.

In 1996, the People With AIDS/HIV Coalition of Baltimore began the tradition of reading a list of names of people who had lost their lives while living with HIV, called the “Book of Life”.  The names have all been contributed voluntarily by friends, family and loved ones in Baltimore.  The book is continuing to grow as additional contributions are made to it each year, has been read publicly in its entirety each of the past twenty years, and will be read for the twenty first time on World AIDS Day, again this year.