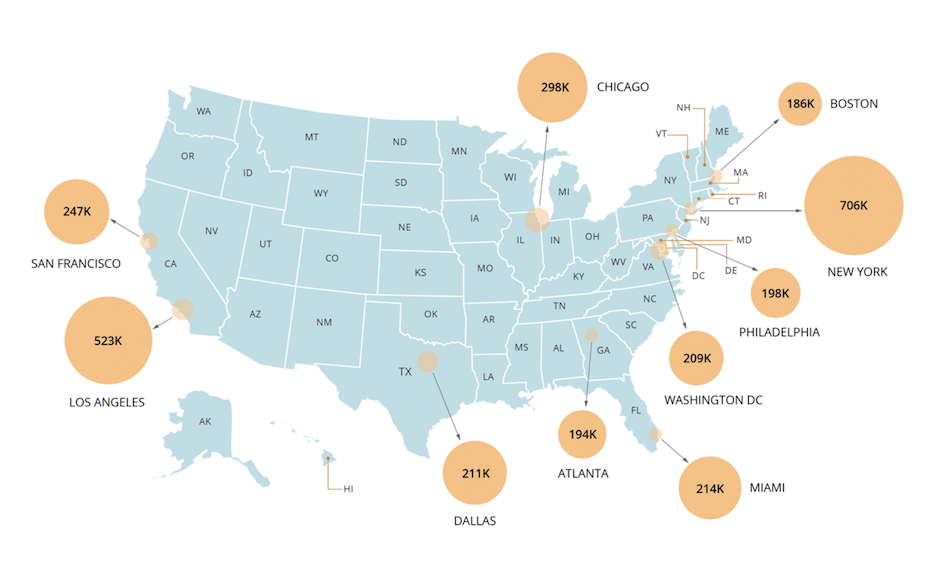 Los Angeles, CA – The Williams Institute at UCLA released new statistics of estimated LGBTQ populations around the U.S. The Dallas-Ft Worth area has the largest LGBTQ population in Texas and the sixth largest in the U.S. With 706,000 LGBTQ people, the New York metropolitan area has the largest LGBTQ population. Next is Los Angeles with 523,000. Third is Chicago with 298,000 and San Francisco with 247,000. South Florida squeaks in just above Dallas- Ft Worth with 214,000 compared to 211,000 and the Washington, D.C. metro area right behind with 209,000. The population figures are estimates.

The 211,000 number for the Dallas- Ft Worth are represents 4 percent of the area’s population. That puts Dallas comfortably ahead of Houston. Williams Institute estimates 3.5 percent of the Houston area or 169,000 people are LGBTQ. For San Antonio, 4.4 percent of the metropolitan area is LGBTQ. That translates to 78,000 people. Austin has the highest percentage of LGBTQ people at 5.9 percent representing 90,000 people.

The Institute estimates Baltimore’s LGBTQ population at 89,000 or 4.1% with a range from 81,000 to 98,000. The Washington, D.C. metropolitan area that includes D.C, and its Maryland and Virginia suburbs has 209,000 LGBTQ people or 4.5% of the population. (Dallas Voice – David Taffet at https://dallasvoice.com/williams-institute-releases-new-population-stats/ and The Williams Institute at https://williamsinstitute.law.ucla.edu/wp-content/uploads/MSA-LGBT-Ranking-Mar-2021.pdf)