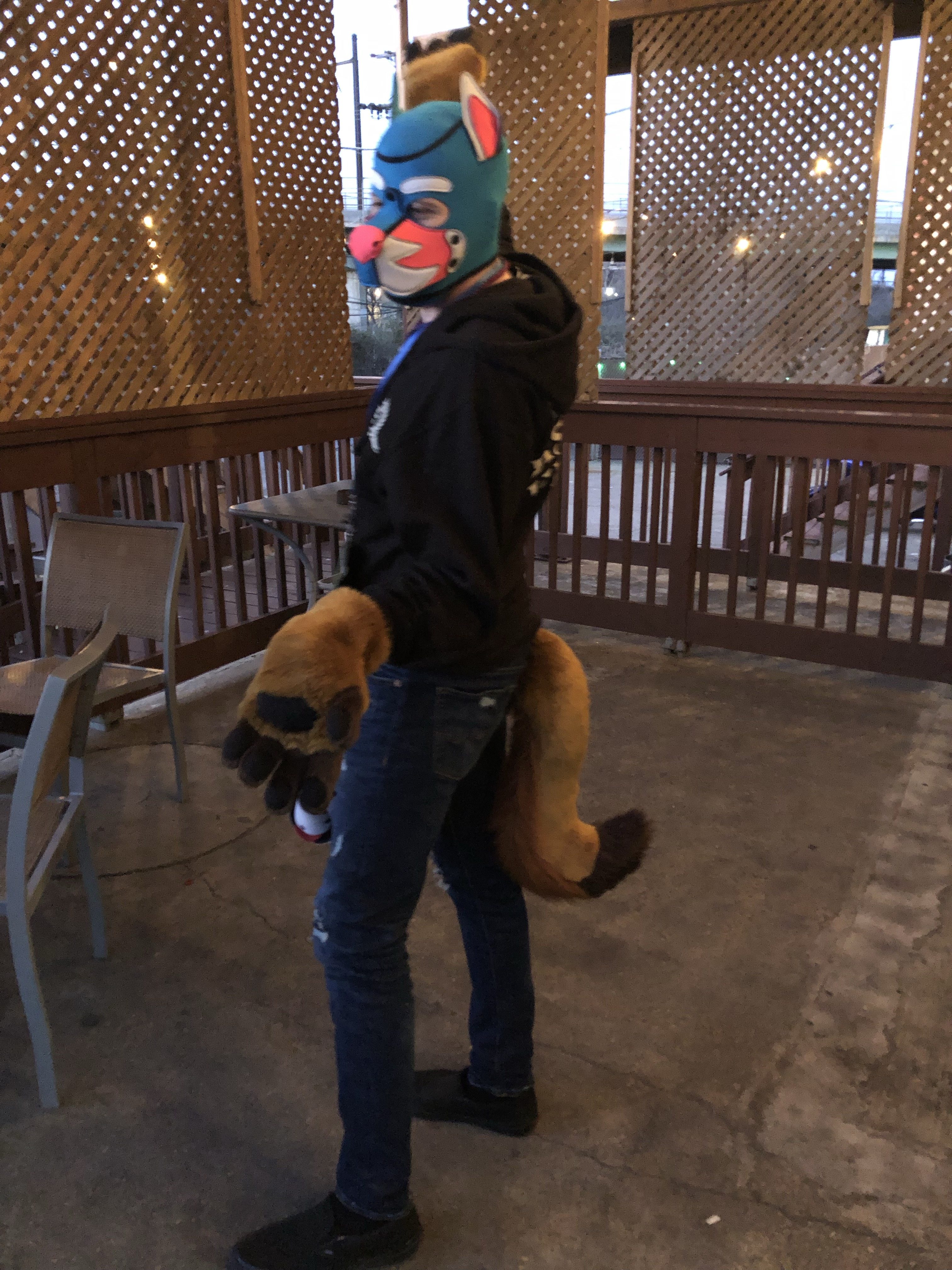 It all started as a subculture of the leather community and as a part of dominant / submissive relationships. The submissive would adopt canine mannerisms and would be less than a boy, he would be a dog. Many enjoyed the headspace of puppy play either with other dogs, some of whom were lead dogs or “Alphas” or with a dominant man or a handler. As the popularity of puppy play grew, the Lone State boys of Leather produced a contest. Alpha-pup Ray of Alaska was awarded the title of International Puppy 2001 in a contest held in Houston, Texas. Just as leather clubs gave birth to leather boys clubs, in 2004 the first leather club devoted to puppy play was begun when the San Francisco K-9 Unit was formed. Soon additional puppy clubs appeared, and more puppy contests were held. Today the pup community is a big part of the leather community.

On Friday, March 15th I traveled down to Washington to meet with the vice president of one of the newest puppy clubs. Arriving a few hours before their monthly DC Eagle bar night, I was able to sit down and talk with Ultra Pup, the vice president of Capital-PAH (Washington, DC Pups & Handlers). Started in 2017, this club now hosts many events including monthly pup nights in Baltimore and Washington. Ultra Pup discovered kink at an early age. In fact, he laughed as he explained that when he was 15, he discovered his grandmother’s box of toys. When he asked her about them, he learned that she was a dominatrix. In fact, he learned that both his grandmother and his mother were dominatrices. Apparently kink runs in the family. (You won’t find that on Ancestry.com!) When he was 18, he “got into the pup thing when he discovered it on the Recon fetish app.” He was not aware that there were leather clubs or even a leather community until he went to the DC Eagle. He has embraced the puppy scene 100% and feels that being in puppy headspace is a great outlet for dealing with his stress and anxiety issues. He added that when he adopts his pup persona it is “not me” and he can escape his mental health issues. He very recently discovered the furry community, as well. In fact, following our interview he was rushing off to enjoy the seventh annual “Fur the More” a large furry conference being held in Tysons Corner, Virginia.

Capitol-PAH has become a very enjoyable outlet for him. The club is open to anyone (18 or older) with an interest in pup play regardless of gender. Applicants are interviewed, pay a $15 pledge fee, and serve a six-month pledge period. The pledge period may be shortened if the applicate works hard at events. The club holds pup nights every 3rd Friday at the DC Eagle starting at 8 pm and have a Baltimore Pup Night scheduled for Friday, April 5th at Flavor located at 15 East Centre Street in Mount Vernon. The club plans to move the Baltimore Pup Nights to the Baltimore Eagle once it reopens. In fact, Pup Ultra will be working there as a DJ. Capital-PAH also host play parties at Sigma in DC. For details about the club and a schedule of coming events visit Capitalpah.org. Pup Ultra would like to see the pup community continue to grow in the DC / Baltimore area and envisions that Capital-PAH could one day host a weekend conference much like Fur the More. Pup play may not be for everyone and I have even seen negative and derogatory comments about pups on social media. I asked Pup Ultra how he deals with naysayers. He replied, “Life is a ride. You only do it once. Don’t let anyone tell you that you are doing it wrong!” It wasn’t difficult for me to see that Pup Ultra is one happy pup. Come out and experience one of the Capital-PAH events. It may be time to let out your inner dog.