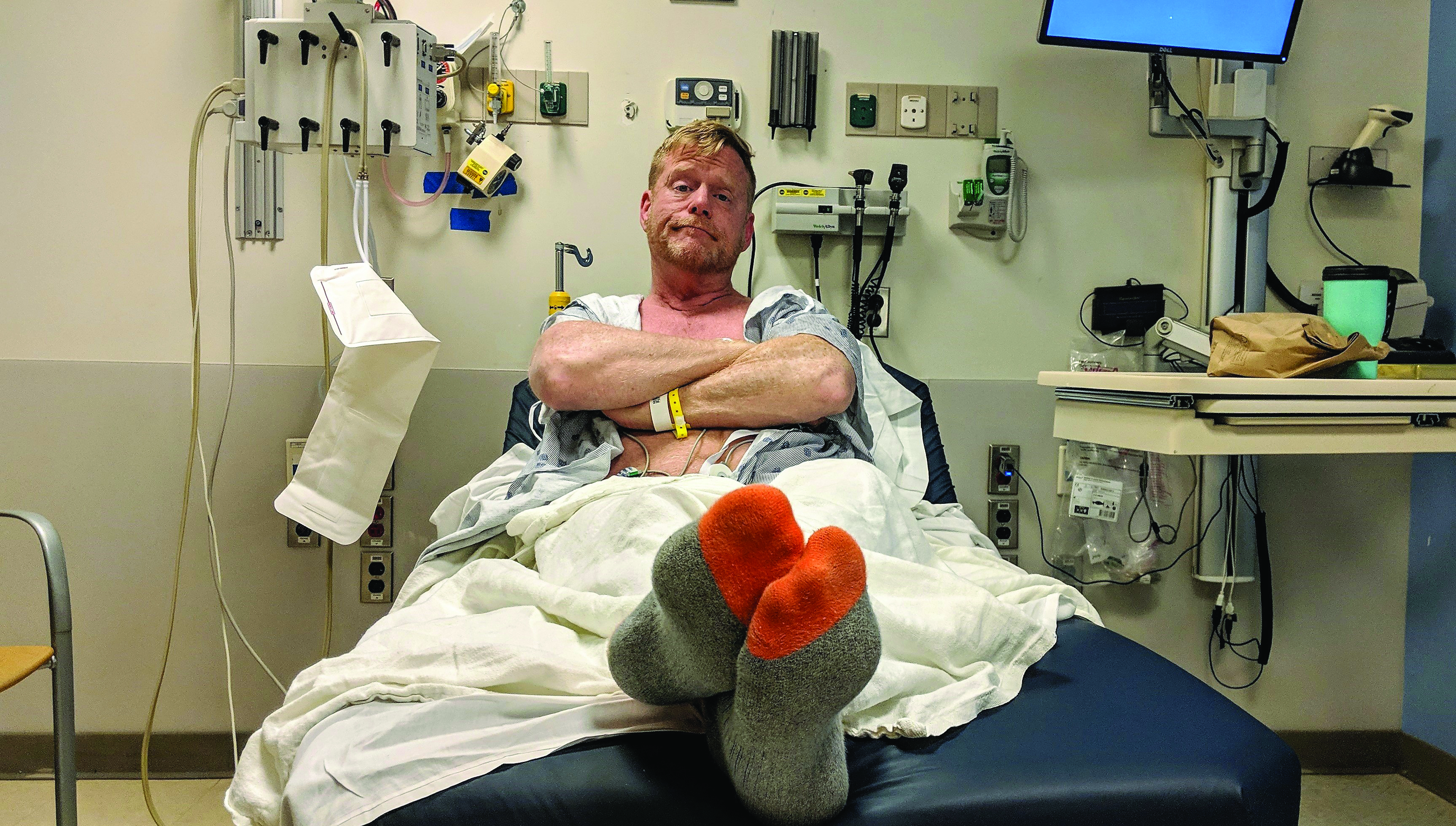 Fainting is weird, especially the third time it happened during one weekend. By that time, I knew enough to grab a safe spot – the front steps of the house, I had been admiring the blooms in the courtyard – before the queasy rush that had suddenly consumed me would knock the lights out.

Waking up is even stranger, when your scrambled brain is flashing images of an Amy Schumer comedy and a rabbit hole Godzilla loud argument … What the hell?Am I here? … and then the front steps come into focus and holy shit I just fainted again.

The first two spells had been the night before, ten minutes apart. I decided against going to the hospital because I was pretty sure of the cause: I had been taking two medications known for lowering blood pressure along with an HIV med that boosted everything. Not a good combination, and I was already working with my doctor on a change.

My husband didn’t trust that explanation after the third blackout and took me to the emergency room.

Within an hour I was in a room with EKGs and an IV. I waited around a lot, took selfies, and generally downplayed the circumstance I had found myself in.

Worse, I was scheduled to get on a plane in the morning for a trip to Minnesota. I was the keynote speaker at the Opportunity Conference, sponsored by JUST US Health in Minneapolis. And I was doing a workshop. And I was meeting with a group of clients living with HIV.

The doctors wanted me to stay so they could follow my EKG longer, even though it hadn’t spit out anything alarming so far. And they wanted to get an echocardiogram in the morning.

I said no. I would be leaving in a few hours for my plane “against medical advice.” I wasn’t going to allow the non-profit organization that was hosting me to have to scramble for another speaker the day before the event.

My friend Jon was staring at me after the doctors left my room. “Didn’t you just write about this?” he asked. I had no idea what he was talking about. “Write about what?” I responded.

“That article you just finished for Poz magazine,” he said. “About all those people making themselves sick and going to the hospital because they were so ‘dedicated’ to their HIV advocacy?”

“Oh. That article,” I allowed. My essay, “What Price Activism,” does indeed profile HIV advocates who worked so hard that they exceeded their personal boundaries and, in a couple cases, ended up in the hospital after seriously overdoing it. Self-care and all that.

“Those stories are completely different,” I argued to Jon. “The people in my Poz story had so many HIV obligations that they ended up going to the hospital. I am leaving the hospital to go to an HIV obligation. See how that’s different?”

“Yeah,” Jon said. His eyes rolled back. “You keep telling yourself that.”

Driving me to the airport in the morning, my husband Michael was so mad he could barely speak. “I do not agree with this decision,” he managed to say, unloading my bag from the car and providing a cursory farewell embrace.

Does it matter if I tell you that I was fine, that I had stopped the meds I believed were causing the problem, that I made it to Minneapolis without further incident, that my speaking engagements went really well, or that I have not suffered a fainting spell since?

That’s my dilemma, really. I want to argue that I am an empowered patient and I know my body and what was best for me. And even as I type that sentence I can see the arrogance of it. I realize now that it doesn’t matter if I turned out to be right about the cause of my fainting. The point is, what if I had been wrong?

And now, re-reading my Poz magazine essay, I have even more empathy for the crazy-sounding antics of the advocates I interviewed – and even more concern that we tend to advocate for everyone except ourselves. We just won’t take that oxygen mask first.

Or, maybe I am so completely self-absorbed and hungry for the spotlight that I left a hospital bed to be an AIDS Star in Minnesota. I mean, as long as we’re being honest, it’s worth considering.

Here’s to a renewal of self-care this summer for all of us. And if you need a speaker for your next event, drop me a line!