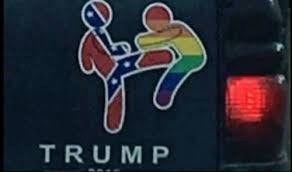 A year ago this week, I set out with a band of fierce and determined woman, gay and straight, to tackle the steep hills of Pittsburgh and canvas for Hillary Clinton for president. We were tireless and optimistic, even as the yards stretched out before us outside in the Pittsburgh suburbs blanketed with Trump-Pence signs and random doors (of identified democratic-leaning voters) slammed in our faces.

But we each had an underlying belief that it could not be this bad everywhere, that we as a country were not going to let an amoral, bullying, narcissistic racist misogynist billionaire with the intellectual curiosity the size of a pin become the leader of the land. And a vice presidential nominee who was a fierce anti-gay crusader and proponent of conversion therapy. This would not happen, we thought.

A year later to the week, I traveled to Ashburn, Virginia – with another band of women, fewer in number and less optimistic it is true, but tireless in determined resistance. We came to canvas for a Democratic candidate for governor, Ralph Northam, who faced Republican opponent Ed Gillespie – cookie-cutter Trumpian surrogate – who has brandished the president’s incendiary politics of racially and culturally tinged appeals to lure conservative republican voters to the polls in the Old Dominion State.

None other than the Gay-Hater-In-Chief, Mike Pence, had campaigned with Gillepsie just days ago. These men openly run on platforms of fear, hate and division which ban pro-immigrant “sanctuary cities,” mourn the loss of American history with Confederate statues’ removals, seek to cut health care benefits for millions of women, children, and seniors while boosting corporate tax breaks for the 0.01% of the richest Americans.

A year ago as news of the Trump victory set in, we in the gay, lesbian, bisexual and transgender communities hoped to be spared the worst of the new president’s inflammatory rhetoric and brutal marginalization. After all, he was never virally or rabidly anti-gay, even made a couple of feeble gestures towards us during the campaign.

But literally hours into his presidency that first January Friday, all content on LGBT civil rights was brutally removed from the White House website. In February he rescinded protections for transgender students on their use of restrooms in public schools. In March he revoked protections for LGBT workers against discrimination in hiring and employment. Next came the dropping of the federal lawsuit over North Carolina’s statewide prohibition on LGBT equality. Then the bombshell that the US military would not “accept or allow” transgender individuals to serve “in any capacity.”

More recently Trump issued an executive order underlining his commitment to “religious freedom,” which set Attorney General Jeff Sessions to work busily scribbling informative guidtelines. “Just last week, based on my executive action, the Department of Justice issued a new guidance to all federal agencies to ensure that no religious group is ever targeted under my administration, it won’t happen,” Trump trumpeted.

Human Right’s Campaign President Chad Griffin has decried the unremitting efforts “by Trump and Mike Pence to undo our progress and drag LGBTQ people back into the closet by using our lives as political pawns.”

This is the heart of the matter. The current ruling administration of the United States of America wants us back in the closet. It’s just that simple. And Donald Trump has fully pivoted from just not wanting to know (It [homosexuality] is just “not my thing,” he once said) to actively embracing the Pencian far-right destructive agenda.

Trump’s utterances portray white straight Americans as besieged, put upon, on the defensive against and in danger of being usurped by the “others” trespassing among us, i.e. those “less-than-us.” These less-than-us make America not great, and they actually show the gall and effrontery to want to live their fullest lives and demand all the rights and progress that entails. The nerve of these inferiors and freaks, the Trump team feels, don’t they know their place? Can’t they hightail it back into the shadows, so we can get on with the business of making America Great Again? “How times have changed,” Trump said last month at the anti-LGBT 2017 Values Voter Summit. “But you know what, now they’re changing back again. Just remember that.”

Instead of acknowledging, embracing, and celebrating the nation’s multicultural diversity, this president encourages straight white fear and hatred by linking all the “others” to larger terrors – crime, terrorism, economic collapse, limited employment opportunities, poor schools, and the sanctity of the American flag and the American myth. He stokes anxiety by dividing the country into “us” and “them.” So far no one in his own party has had the guts to call out and renounce this president, except a couple of senators who have decided to leave the arena.

So we do what we can, which means, this month, canvassing on the streets of Virginia. Taking a break for a caffeine run to Starbucks, we overheard a conversation between the manager and a regular customer. The former, a thirty-something West African American immigrant spoke about her current schedule – working full time while pursuing her public justice degree with plans to then take the LSATs and become a lawyer. Starbucks is paying for her school, she said, assuring the regular that she was not leaving her job anytime soon.

This, I thought, is what makes America great.